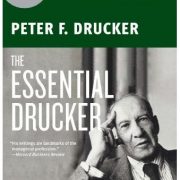 If you have been living in a cave for the last 75 years and missed the work of management guru, Peter F. Drucker, here is your chance to catch up.

I finished reading The Essential Drucker, a weighty tome of 368 pages which summarized the high points and pearls of wisdom of the author’s 38 books published since 1939.

A self-described?social ecologist?, Drucker was a journalist who moved to Germany because job prospects in his native Austria-Hungary were so poor following its defeat in WWI.

He became a close friend of Austrian economist Joseph Schumpeter, who popularized the term ?creative destruction?, and attended lectures by John Maynard Keynes. He fled to the US in 1934 after his writings were burned by the Nazis.

For most of human history, armies were the predominant management model, and most corporations today show the military influence.

Management only emerged as a science during the 1920s, and Drucker was one of the founding fathers. Early adopters, like Coca Cola, Du Pont, IBM, and General Electric, went on to prosper mightily.

He observed that Franklin Delano Roosevelt set up the most productive administration in history. Taking even a single step was so painful for him that he, and all those who worked around him, had to organize the government with the maximum efficiency possible.

This was a key element in America’s victory in WWII.

Drucker writes at length on the risks and opportunities of entrepreneurship, and argues that all companies must innovate or die, no matter how pedestrian their product.

He predicted many of the trends that came to dominate the late 20th and early 21st century, such as privatization, decentralization, globalization, and the rise of the knowledge worker.

He had a huge following when I was in Japan during the seventies, and his mark can be seen in today’s global presence of the major Japanese keiretsu.

While most define a company in terms of producing products and making a profit, Drucker sees it’s mission as?creating a customer?. He presents a rigorous process for decision making.

He lauds nonprofits as the best-run organizations in the country because they have to be. Groups like the Girl Scouts, the Red Cross, and United Way maintain an effective global presence without paying their people any money.

He makes the distinction between efficiency and effectiveness, doing things right, versus doing the right things.

Anyone who manages a business, from a Fortune 500 company to a single individual banging away on a PC at home, will benefit from reading this book.

It forces you to take a look at your own operation with fresh eyes. It even advises on how to manage one’s own time, from dispensing with unnecessary meetings to minimizing paperwork and bureaucracy.

Drucker moved to California during the seventies, where he set up one of the early MBA programs for Claremont College.

He died in 2005 at the age of 96. To order this insightful book from Amazon, please click here.

Your Best Performing Asset Just Got Better
Scroll to top