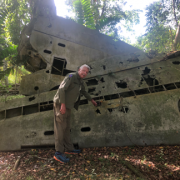 When the Commandant of the Marine Corps asks for a favor, I say “Yes Sir” without hesitating.

So, when General David H. Berger called me and asked to represent him at the 78th annual memorial service for the 1942 Battle of Guadalcanal, I started booking my flight. It turned out to be one of the most amazing experiences of my life. It also may have saved my life.

He needed a Marine veteran who had family members on both sides of the battle and spoke fluent English and Japanese. It turns out that there is only one such individual in the United States, and that would be me.

Both my father and my uncle Mitch fought at the Canal, where he won a Medal of Honor. My late wife’s father was a Captain in the Japanese Army. His family had the government monopoly for supplying “sniper boots”, or “jikatabi.”  That enabled me to sympathize with the Japanese families attending the service who lost loved ones.

I have acted as a diplomatic representative for the Marine Corps for many decades. Over the years, I have met presidents, most Medal of Honor winners, and Navaho code talkers.

Today, Guadalcanal is one of the poorest countries in the world, with a per capita income of about $3,000 a year, That’s just a guess from Australian aid workers. Less than 50% of the population participate in the modern economy. Some 70% of the modern economy is accounted for by Chinese logging of ancient tropical hardwood trees.

The rest live a more traditional lifestyle of fishing and growing jungle fruits and vegetables. There are countless barefoot kids running around everywhere. Most families have more than five kids and birth control is unknown. Not helpful to the island’s poverty of course is the still present devastation by this military activity from WWII; you can read about it’s impacts here.

I hired a local guide and translator of the local language of pigeon, a sturdy four-wheel drive SUV, and sought out the local WWII battlefields. It wasn’t easy, as there were only 20 miles of paved road in the entire country and no street signs.

I was not disappointed.

The first stop was Paige’s Ridge, also known as “Hennikan’s Ridge”, where my uncle won his Medal of Honor, fighting a heroic night battle where he mowed down 2,000 charging Japanese in a torrential rainstorm. For a more detailed description of Mitch, please click here.

Reading from his diary, I was able to locate his exact fighting position, where I used a shovel to dig out several Japanese 6.5mm Arisaka bullet that had been fired at him.

A mob of local kids huddled around me watching my every move. I finally told them to bring me their souvenirs so I might buy some.

What came back was amazing.

One boy around nine years old showed up with a tattered old Marine rucksack and spilled the contents on the ground. There were several live Japanese hand grenades, some unexploded mortar shells, and spent bullets of several kinds. I warned him, these could explode at any time and that he should be careful not to drop them.

My next stop was Hill 27, the subject of the 1998 movie Thin Red Line, and where my dad fought. I found my dad’s foxhole dug out of the coral and extracted out more Japanese bullets. It was moving to finally grasp the suffering he went through as a 19-year-old, starving, afraid, and suffering with malaria.

Scouring the hill, I managed to dig up some USMC dog tags still readable. I forwarded them to the US Marine Corps Historical division so that I might return them to the families. My dad gave me his dog tags right before he died 20 years ago.

In the village near the summit of Hill 27, everyone had huge collections of war relics; pieces of Japanese zero fighters, helmets, coke bottles, rusted-out machine guns, and prewar coins from both sides. One citizen had amassed at least a kilo of morphine in military sachets. I even found a bottle of Old Spice aftershave, my dad’s favorite.

Another offered me a Japanese skeleton in a plastic bag for $10. He said I could get as many as I wanted. There are in fact 23,000 Japanese missing in action on Guadalcanal. So, I emailed a friend in the Japanese government in Tokyo asking if he wanted any wartime remains.

He said not to worry. Once a year, the government sends a scouting party to pick up all the remains they can find. They then cremate them, take the ashes back to Japan, and inter them at Yasakuni Jinja, the country’s equivalent of Arlington National Cemetery.

Next, I drove deep into the jungle to find a graveyard of US fighter planes. They were all there, rusting away in all their glory; Wildcats, Corsairs, and Aircobras. On the way back, I managed to find a battered Sherman tank.

I was invited to explore an intact Boeing B-17 bomber discovered only two years ago. But it involved hiking four hours into the mountains. Since one of my companions hadn’t taken anti-malaria drugs and the mosquitoes were present in great clouds, I passed.

I went on to visit several other historic sites. I saw Red Beach, site of the initial Marine landing, where I found a nearly buried Japanese tank. I spent time at the Alligator Creek, where the Marines wiped out the Ichiki battalion.

With great difficulty, I found John Basilone’s machine gun bunker. John also won a Medal of Honor. I stopped by the soaring monuments of Bloody Ridge, where Edson’s raiders held off another Japanese onslaught. The original wartime tower for Henderson field can still be found at the airport.

Only recently did I realize that this trip commemorating the battle of Guadalcanal may have saved my life. To keep malaria at bay, I took Chloroquine for a week before, during, and after the trip. It is now being explored as a Coronavirus drug.

My original intention had been to make a 45-minute documentary video and give it to you and the Marine Corps. The stock market crashed the day I got back so everything is now on hold. Maybe if things quiet down this summer, I can get to it.

After all, I won’t be going anywhere. 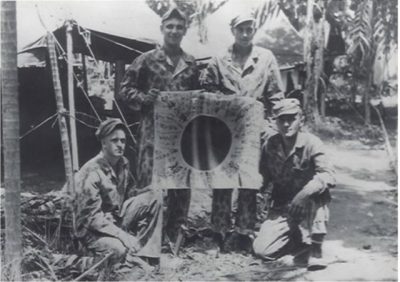 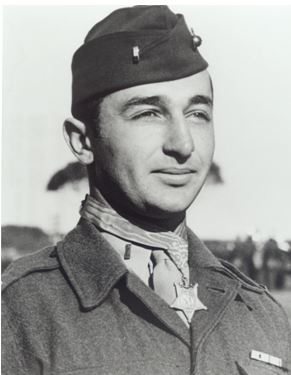 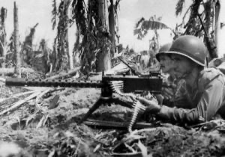 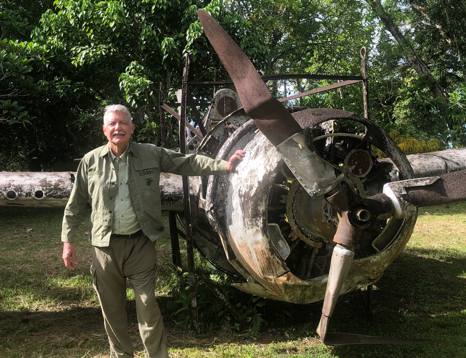 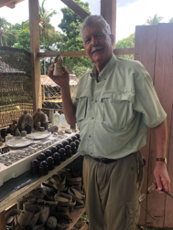 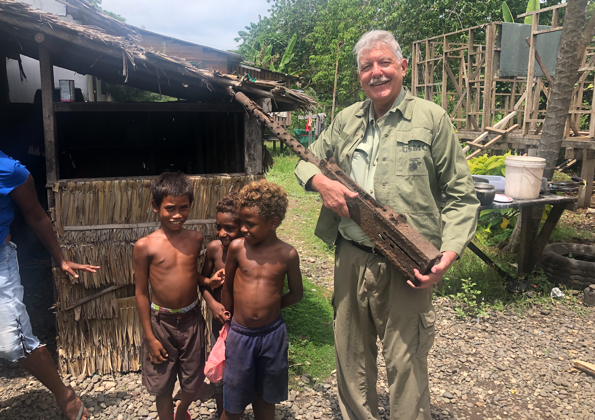 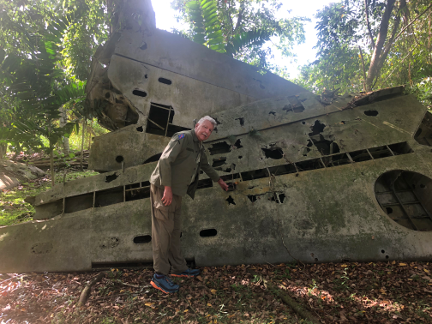 A Crashed US Carrier Plane 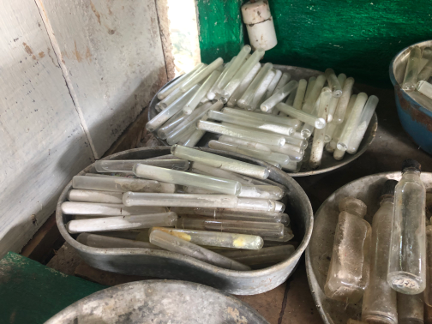 A Kilo of Morphine 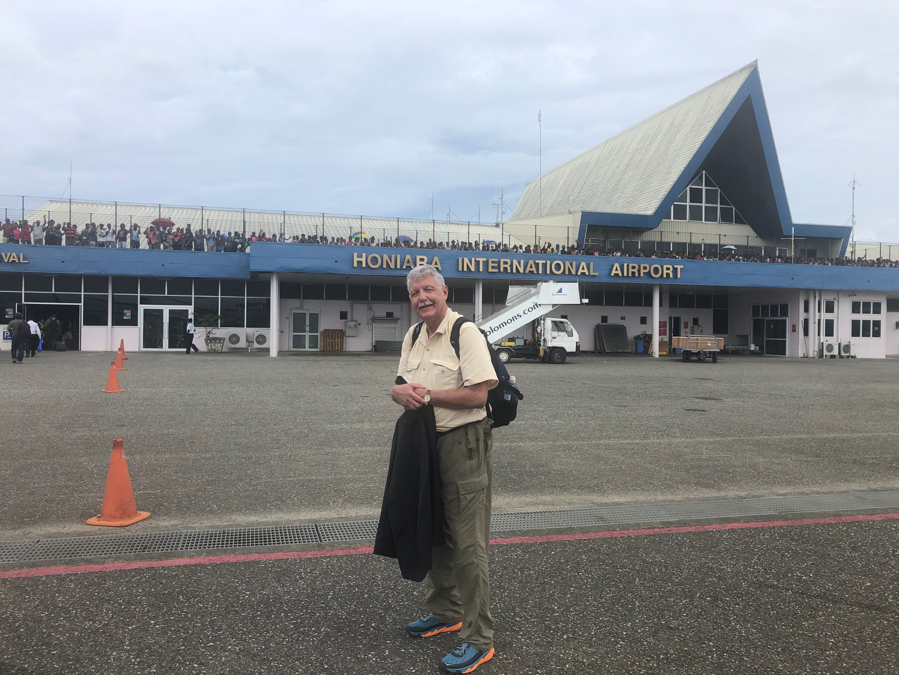