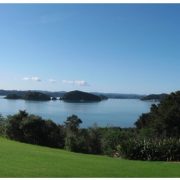 I am writing this report from the Duke of Marlborough Hotel and Pub in remote Russell, off the east coast of New Zealand?s North Island. One known as ?The Hell Hole of the Pacific?, in 1835, no less an authority than Charles Darwin claimed this 19th century whaling port was populated with ?the refuse of humanity.?

It has since been cleaned up, gentrified, and turned into a tourist mecca. It is much like Lahaina on Maui, Hawaii was in the early seventies, before the blighting high rise hotels and condos went up.

The Residents of Russell Were Most Welcoming

Others Had Different Opinions

The bar is packed to the gunwales with drunken and riotous rugby fans screaming their lungs out in support of their team in the world cup quarter finals. When Wales won, I bought a round of drinks for the house, but first had to arm wrestle a deeply tanned and craggy faced Welshman for the right to do so. I hope my credit card doesn?t get cancelled when the bill comes through for NZ$1,046.29. ?Thomas? is a Welsh name, isn?t it?

The trip started auspiciously at SFO when I found myself checking in behind a group of heavily tattooed, bulked up Maoris. First class was entirely occupied with older, but very large, white males all wearing an assortment of rugby juries. I arrived to find a country in the grip of rugby fever, every car and structure sporting the silver fern flags of the All Blacks home team, famous for their pregame ?hakka? war dance.

The rental company was out of cars, thanks to the games, but managed to come up with a battered old Toyota Camry with bald tires, breaks well past their prime, and leaking fluids from every orifice. In other words, it was a lot like me. I was OK with the left hand drive, having lived for 20 years in Japan and England.

But the stick shift certainly made things interesting. I can?t tell you how many times I turned on the windshield wipers instead of the right turn signal. I headed north from Auckland hoping to find better weather, picking up hitch hikers along the way to absorb the local lore.

My dad was here 70 years ago with the Marine Corps, training for the invasion of Guadalcanal, and always remarked how friendly approachable the women were. I found them friendly, yes, but not so approachable. Maybe this is because he was a combat ready 19 year old, and I am a combat ready, but aging 59 year old fart.

The countryside was incredibly lush and green, mountainous, and covered with massive ferns and kauri trees ensnarled by choking vines. Cleared grazing lands were dotted with sheep. The Maori are ever present, accounting for a substantial part of the rural population. Every town name seems to start with the letter ?W?, as in Whangaparaoa, Whangarei, and Waipu.

One of the most interesting conversations that I have had this year was with an aged Maori historian and Shaman at the Waitangi Treaty Grounds. When I told her I was part Cherokee, Sioux, and Delaware Indian, she opened right up and let loose for two hours. It turns out that tribal groups around the world are cooperating and coordinating legal attacks on establishment land ownership around the world. Everyone from the Maori?s to Hawaiians, Navajo?s, Australian, Aborigines, and Finish Laps are involved, and are getting legal aid from the United Nations.

The Maori?s have been especially successful, scoring a $170 million payoff from their government. The money went into community centers and education in the most Maori dominated parts of the country. It isn?t often that I get to discuss the global economic with a Neolithic tribal representative, and I relish the opportunity. I am always looking for the new view, and I?m sure there is much we can learn from 8,000 BC.

When I checked into the Pahia Beach Hotel and Spa, I did what I always do when I visit the Southern hemisphere. I flush the toilet, watching with satisfaction as the water disappears in a counterclockwise fashion, thanks to the Coriolis force. In the Northern hemisphere is goes down clockwise. If you don?t believe me, go try it. That night I found the Southern Cross, the only one of 88 constellations not visible at home.

We all thought New Zealand was toast when Great Britain cut the economic umbilical coat by joining the European Community in 1973, leaving the land of the kiwis out in the cold. A radical series of reforms saved the country in 1984. The financial system was deregulated and exchange rates were freed. Agricultural subsidies were cut, forcing farmers to become more efficient and globally price competitive.

Through a series of fortunate historical accidents, it then entered the sweet spot of the global economy. It was too small to have its own car industry, so it had nothing to lose when Japan took over that business. The same occurred with manufacturing, which China swallowed whole in the past decade. Today, services and tourism account for 70% of GDP. With a per capita GDP of $27,130, New Zealand ranks 33rd in the world, behind the US at $46.810 (7th), but well ahead of China at $7,544 (94th).

Kiwis Will Sell You Anything

Today, the World Bank ranks New Zealand as the most business friendly country on the planet. It has the lowest taxes in the developed world, and an unemployment rate at an enviable 6.6%. People are happy and the cities bustle. This makes all of the country?s assets long term buys, including the New Zealand dollar (BNZ), the stock market (ENZL) and a ten year government bond that yields a generous 4.65%. Use the big dips to take positions.

And Never Throw Anything Out

Well, I have to go now, or I?ll miss the last ferry back to Pahia on the mainland. Besides, that waitress across the room is starting to wink at me.