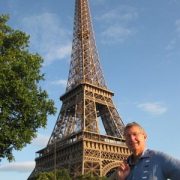 The full force of soaring oil prices really hit home when I arrived in Paris yesterday. As we passed a gas station, I mentioned to the driver that I didn?t know that they sold gas by the gallon in France. He answered that they didn?t. Those were the prices in liters I was seeing. He then voiced concerns about the future of his taxi business as fuel prices ratcheted up from $10 to $15 a gallon! It makes our own bleating that our prices at $3.50 a gallon appear somewhat detached from reality.

The Paris strategy luncheon, held at the Cercle National des Armees, or the French Army Officers Club, was one of the best yet. You know, the place where Napoleon used to hang out? I gave my talk under the watchful eyes of the portraits of Charles de Gaulle, President Francois Hollande, and the French Foreign Legion. Renditions of the battle of Waterloo were nowhere to be seen.

When I gave my event here last year, Internet access was only available in the lobby. Perhaps that?s why the French lost Vietnam? At the table on my right a group of French Air Force officers were planning the next air strike on Libya. On my right several Chinese admirals were negotiating to buy an aircraft carrier from the French Navy. It was some of the most fascinating eavesdropping I have ever done.

The event turned in to something of a reunion for me, with my former institutional clients from the 1980?s dropping by, as well as some of my French staff from the London office of Morgan Stanley. A gentleman from Warsaw, Poland won the prize for the greatest distance traveled. Spend your Zimbabwe dollars wisely. Maybe you can offload your holding to Bashar Assad, who may soon need them.

The big question at all of my recent lunches is ?Will there be a QE3? I offered the simplest of all possible explanations. Asset classes that prospered mightily from the $600 billion infusion of the Federal Reserve during QE2, like stocks, commodities, precious metals, and oil, will suffer the most from its demise. Asset classes that suffered from the rapid expansion of the monetary base this encouraged, like the US dollar, should see a rebound. The political balance in Washington makes a QE3 impossible, unless the stock market crashes first, vaporizing Ben Bernanke?s wealth effect. So don?t hold your breath. It would be a last desperate act.

Not All is Well in the City of Light

Everyone present complained that the Euro was in freefall at $1.22, but conceded that momentum could take it as low as $1.00 before it sees a reversal. I brought an extra suitcase to Paris, hoping to fill it with goodies for those on the home front at the department store Gallarie Lafayette, Mon Dieu! But prices were still so high that I only purchased a few postcards, knowing I could buy the same products at home on the Internet for half the cost, with free shipping and no import duties.

I spent the weekend playing tourist and visiting my old favorites, such as the Louvre, the Musee d?Orsay, Sacre Coeure, Montmarte, the Eiffel Tower, and a fine dinner floating down the Seine on the Bateaux Parisienne. The food is so good that even the local corner brasserie produced a meal to remember. A stylish people make it impossible to be overdressed, no matter where you go. In Paris, even the homeless have taste. A search for my front teeth on the Left Bank, which I lost in a riot there in 1968 when a flying cobblestone hit me in the mouth, yielded no results.

My next report will be from Frankfurt, Germany.

Why Ben Bernanke Hates Me
Scroll to top