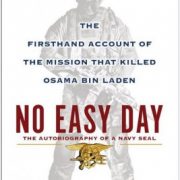 The team fought their way up two flights of stairs in pitch-blackness, dispatching several fighters along the way.

A tall figure emerged in the green glow of the night vision goggles. It hesitated. Two shots were fired, and the body hit the ground.

That was how Navy Seal Team Six member, Mark Owen, described the last seconds of Al Qaida leader, Osama bin Laden, in the raid on his Abbottabad, Pakistan compound.

I can?t tell you how I met Owen, except that the circumstances are classified, and it took place at an undisclosed location. A number of terrorist groups are seeking retribution for the raid, making Mark and his teammates prime targets.

He and his family now live in the witness protection program buried deep somewhere in the US.

Owen isn?t his real name of course, but a nom de? guerre. In fact, I can?t even tell you what he looks like. His prosthetic make up and wig were so convincing, I doubt his own mother could recognize him.

But there was no doubting the bone-crushing handshake of a Navy Seal.

Spending an hour with ?Owen?, I learned several fascinating details about the raid. Just before launching, the team was told there was a 70% chance the Pakistani Air Force would shoot them down on the way in.

There was also the possibility that their top-secret stealth helicopters would crash on a ground hugging flight through the mountains on the darkest night of the month. Every man was given the option to pass on the mission.

However, that didn?t stop them from joking among themselves about the suicide aspects of their assignment.

What was the inside story of the raid?? The most wanted man in the world, the author of the 9/11 attack that killed 3,000 at the World Trade Center, used ?Just for Men?. ?

That was the brand of the hair-coloring agent the Seals discovered in the world?s greatest terrorist?s bathroom, used to make him look younger than he was.

Some of the seals speculated he did this to cut a more threatening figure in his online propaganda diatribes. Others said it was because he had two wives at the site.

The discovery of bin Laden?s secret fortified compound was the result of a decade of tireless investigation by CIA analyst, Maya Lambert. Her role was portrayed in the 2012 film, Zero Dark Thirty, with much embellishment.

The US torture of suspects probably slowed down the hunt, rather than accelerated it, because a glut of false information obscured valuable tips. People will say anything to stop the water boarding, right?

In the end, it was a junior CIA analyst trolling through ten-year-old archived data gathered in Morocco that uncovered the crucial clue. That was the name of Ibrahim Saeed Ahmed, who turned out to be bin Laden?s personal courier to the outside world.

Constant National Security Agency monitoring of his mother?s phone line in the Persian Gulf led to Ahmed?s location in Pakistan. He was then discretely followed to the mysterious compound in Abbottabad.

Bin Laden successfully hid for so long because he had fallen far off the grid of modern civilization. He never left the building, and didn?t use cell phones or the Internet. Trash was burned on site.

His sole means of communication was via flash drives and DVDs physically carried by Ahmed on an infrequent and unpredictable basis. Bin Laden had effectively jailed himself for five years to stay under the American radar. How ironic.

Since there was no means to verify the identity of the compound?s occupants before the raid, the Seals were the only option. Maya Lambert personally saw them off on their departure from an Eastern Afghanistan base. She too was committed to the mission to the very end.

Even when the helicopter in which Owen was riding crashed because of freak lift conditions, the mission went ahead. Since their carefully crafted and much practiced plan fell apart, they improvised on the spot, a mandatory Seal quality.

They professionally and methodically breached the compound?s outer wall and blew some steel doors off their hinges before they reached their third floor destination.

Owen went to great lengths to explain how the civilians on the site, including bin Laden?s own family members, were kept out of harm?s way.

After dispatching their target, the Seals quickly photographed him, took a DNA sample, and uploaded it via satellite link to Washington DC. Confirmation came back in minutes.

They had gotten their man.

Before the team cleared out, they bagged every possible item of intelligence value. There was so much material that they ran out of bags to carry it. Computers were smashed open and the hard drives pried out to save on space and weight.

Analyzed back home, this data revealed that several new attacks on the United States were in the planning stages.

After blowing up the remains of the crashed helicopter, the entire team piled into the remaining operational one, with only minutes of reserve fuel left. A much-feared counterattack from the Pakistani military never appeared.

After further identification, bin Laden was buried at sea from a US aircraft carrier in the Indian Ocean.

The success of the raid has done much to alter the discussion on the future of military forces, in the US, and around the world.

It turns out that it is strategically and tactically advantageous, and much more cost efficient to field a small number of super warriors, like the Seals, than a large number of cannon fodder.

Every general and admiral I know, and there are quite a few, would love to junk expensive, antiquated Cold War weapons systems whose sole benefit is that they create jobs in battleground congressional districts.

The Army still buys useless, unprotected, IED vulnerable Humvee?s because they are built in Florida, a major swing state in the last six presidential elections.

The Air Force has more wheezing, ancient, fuel inefficient C-130?s than pilots to fly them (we?re now on upgrade number 22) because they were assembled in Georgia, the home state of former Speaker of the House, Newt Gingrich.

Oh, and the manufacturer, Lockheed Martin (LMT), made sure to buy parts supplied by all 50 states to make it politically ?kill proof.?

Better to spend money on training, cyber warfare, drones, and Special Forces, which will be essential to fight the wars of the future.

?The greatest threat to national security is wasting money in the defense budget,? one brass hat told me, with some irritation.

In fact, the Seals, and the Army?s Delta Force are so effective and destructive that they could well replace entire divisions of the past. It?s a matter of hundreds doing the job of tens of thousands.

The majority, ?ring the bell,? give up early, and are reassigned elsewhere in the military, without shame.

Mark says he was trained to ?eat the elephant one bite at a time,? and described how he struggled to get through a half year of torture a half day at a time. ?You wake up hoping to make it to lunch without quitting. Then at lunch you focus on getting to dinner without giving up. You then repeat this everyday until you graduate.?

Mark spoke of being dumped a few miles offshore and told to swim home in the icy Pacific. Classes would link arms and lie in the surf for eight hours to get accustomed to hypothermia.

They were tied up and thrown in a swimming pool for ?drown proofing.? For good measure they would then have to push a bus uphill, or repeatedly hoist a telephone pole over their heads.

Modern Seals can not only jump out of a plane at high altitude and blow up anything, they can also hack into computers, disassemble cell phones, and track you down online, no matter where you are.

Spurred on by my Dad?s tales of the old Under
water Demolition Teams (UDT), with whom he had experience during WWII, I once thought about applying to the Seals myself. But in the end, I passed. I didn?t think I could make it through the training. There are not a lot of things I won?t try, but this was one.

Because of their prolonged and extreme training, the Seals always get the toughest missions. Owen also participated in the rescue of Mark Phillips, the captain of the containership, Maersk Alabama, kidnapped by Somali pirates.

The cost of these accomplishments is high. Owen held up his cell phone and said it still contained the numbers of 40 close friends killed in action. He will never delete those contacts.

The Seals? focus on teamwork and leadership is so legendary that it has become an area of interest by American corporate management. Seals will volunteer for once unheard of 10th, 11th, and 12th tours to Iraq and Afghanistan, not because of any extreme patriotism, but because they want to be there to support their buddies.

Unsurprisingly, the divorce rate among Seals is about 90%.

Because of this spectacular record, the Seals are shouldering an ever-larger share of our defense burden.

Their numbers have expanded greatly in the past decade. I can?t tell you how many Seals are in action today because it is classified, but it is a much larger number than you think.

One of the greatest honors I have received in writing this letter is when I was invited by Seal commanders to attend a BUDS graduating class in Coronado, California.

Despite receiving many medals and commendations, Mark comes across as humble and self-effacing. It turns out that the braggarts and big talkers don?t make it through BUDS training.

The son of Christian missionaries in Alaska, Owen is now retired from the forces and is trying to get his life back together.

On complaining about neck pains after his helicopter crash, Mark said the Veterans Administration sent him home with a one-year supply of Motrin. After a hedge fund manager friend volunteered to pay for a private specialist, he was told his neck was ?broken? and sent into surgery the next day.

That sheds some uncomfortable light on the current VA scandal.

When my precious hour was up, I thanked Mark for his service and wished him well.

Mark has published his amazing account of the Abbottabad raid in his book ?No Easy Day.? It is a real page-turner, partially ghost written by a journalist friend. To purchase the book from Amazon, please click here. 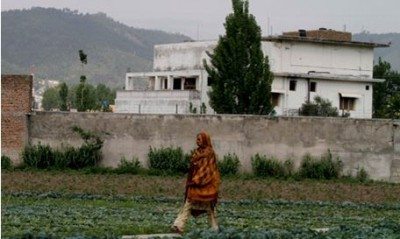 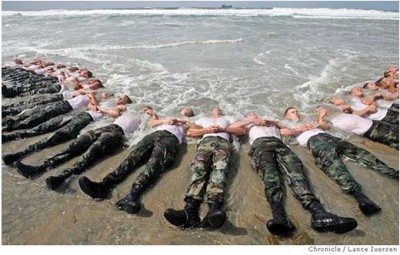 It?s All about Discipline and Teamwork 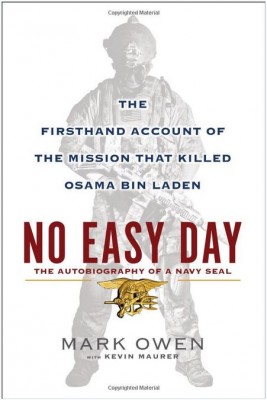