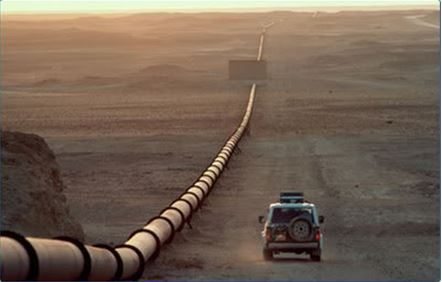 Boy, that was one hell of a recommendation I made back in 2012, getting readers to buy Master Limited Partnerships (MLP?s).

The share price for my favorite, Linn Energy (LINN), is unchanged from when I urged readers to pick it up. However, they have taken home nearly 25% in dividend payoffs during the same period. Not a bad return in this zero interest rate world.

The origins of the special tax breaks that led to the creation of these most complex of securities are lost in the sands of time. As I recall, they date back to a period when the US was chronically short of oil, and industry desperately needed the big ticket infrastructure to produce and deliver it.

They worked like a charm. Never underestimate the desire of the American investor to avoid paying taxes.

An MLP is a ?pass through? instrument that allows profits to move directly to end investors, thus bypassing corporate double taxation. That set up generates enormous yields that are particularly attractive to individual investors. Some 114 MLP?s now exist, and most can be bought on public exchanges as easily as stocks or exchange traded funds (ETF?s).

It is an old Wall Street nostrum to feed the geese while they are quacking, and investment bankers have done so in spades (see chart below). The number of initial public offering for MLP?s has soared in recent years, from just two in 1985 to a prolific 21 last year.

New issue volumes have become so prodigious that they are disrupting the dynamics of the secondary market. Investors are now unloading their existing MLP?s to make room for the new ones, setting back prices on existing issues. The same disease is also afflicting biotech stocks, where an overly ambitious new issue calendar triggered dramatic falls in the sector.

Will Wall Street kill the gold goose yet again?

MLP?s have benefited enormously from the fracking and horizontal drilling boom now unfolding across the United States. As a result, US energy demand is at a 30 year high, and so is the demand for energy infrastructure.

As I often tell my guests at my Global Strategy Luncheons, the smart play in natural gas, where supplies are burgeoning, is a volume play, and not a price play. MLP?s achieve exactly that.

To qualify for MLP status, a partnership must generate at least 90 percent of its income from what the Internal Revenue Service deems ?qualifying? sources. For many MLPs, these include all manner of activities related to the production, processing or transportation of oil, natural gas, and coal.

Energy MLPs are defined as owning energy infrastructure in the U.S., including pipelines, natural gas, gasoline, oil, storage, terminals, and processing plants. These are all special tax subsidies put into place when oil companies suffered from extremely low oil prices. Once on the books, they lived on forever.

Because MLPs are partnerships, they avoid the corporate income tax, on both a state and federal basis. Instead of getting a form 1099-DIV and the end of the year, you receive a form K-1, which your accountant should know how to handle.

Additionally, the limited partner (investor) may also record a pro-rated share of the MLP?s depreciation on his or her own tax forms to reduce liability. This is the primary benefit of MLPs and gives MLPs relatively cheap funding costs.

The tax implications of MLPs for individual investors are complex. The distributions are taxed at the marginal rate of the partner, unlike dividends from qualified stock corporations. On the other hand, there is no advantage to claiming the pro-rated share of the MLP?s depreciation (see above) when held in a tax-deferred account, like an IRA or 401k. To encourage tax-deferred investors, many MLP?s set up corporation holding companies of LP claims which can issue common equity.

The popularity of MLP?s has caused a huge inflow of capital, which has caused yields to crash, from 25% during the dark days of 2009, to an average of 6.7% today. Still, yield starved investors threw money at MLP?s with both hands last year, an eye popping $11.9 billion, according to figures from the tracking firm, Morningstar.

As yields have plunged, risks have risen. In February, Houston based Boardwalk Pipeline Partners (BWP), out of the blue, dramatically cut its payout to investors. A panic ensued, chopping 62% off the value of the shares in the following weeks. No doubt, increased competition for pipelines from railroads was a factor.

To protect yourself you must go to the website and read the prospectus before sending a check to an MLP. Unfortunately, these are so complex that even degrees in securities and tax law might not be enough to help you. What do you do instead? Pray, as seems to be the strategy of most individual investors.

At the end of the day, oil has a big influence on MLP prices. So the antics of Vladimir Putin in the Ukraine are probably a welcome development for MLP holders, as it has helped boost the price of Texas tea from $91 to $105 since the beginning of 2014.

However, get a real recession, and one will be overdue in a couple of years, and the price of oil will collapse once again, causing MLP?s to revisit those subterranean 2009 lows. Mothballed drilling rigs and rusting pipelines don?t produce lease payments or pay dividends. These are the risks you are being paid to take with a double-digit yield.

The lesson here is ?be nimble, or die”.

You Want This One

How Long Will the MLP Run Continue?