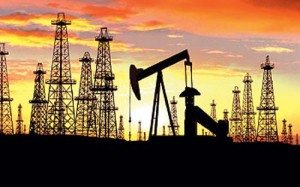 I recommend (XOM) and other oil majors as part of any long-term portfolio. In my lifetime, the price of oil has gone up from $3 a barrel up to $149. The reasons for the ascent keep growing, from the entry of China into the global trading system, to the rapid growth of the middle class in emerging nations. They?re just not making the stuff anymore, and we can?t wait around for more dinosaurs to get squashed.

Oil companies aren?t in the oil speculation business. As soon as a new supply comes on stream, they hedge off their risk through the futures markets or through long-term supply contracts. You can find the prices they hedge at in the back of any annual report.

Working in the oil patch a decade ago pioneering the ?fracking? process for natural gas, I got to know many people in the industry. I found them to be insular, God fearing people not afraid of hard work. Perhaps this is because the black gold they are pursuing can blow up and kill them at any time. They are also great with numbers, which is why the oil majors are the best-managed companies in the world.

They are also huge gamblers. I swallow hard when I see the way these guys through around billions in capital, keeping in mind past disasters, like Dome Petroleum, the Alaskan oil spill, Piper Alpha, and more recently, the ill-fated Macondo well in the Gulf of Mexico. But one failure does not slow them down an iota. The ?wildcatting? origins made this a faith-based industry from day one, when praying was the principal determinant of where wells were sunk.

Unfortunately, the oil companies are too good at their job of supplying us with a steady and reliable source of energy. They have one of the oldest and most powerful lobbies in Washington, and as a result, the tax code is riddled with favorite treatment of the oil industry. While Social Security and Medicare are on the chopping block, the industry basks in the glow of $53 billion a year in tax subsidies.

When I first got into the oil business and sat down with a Houston CPA, the tax breaks were so legion that I couldn?t understand why anyone was not in the oil racket. Every wonder why we have had three presidents from Texas over the last 50 years, and are possibly looking at a fourth (Jeb Bush)?

Three words explain it all: the oil depletion allowance, whereby investors can write off the entire cost of a new well in the first year, while the income is spread over the life of the well. This also explains why deep-water exploration in the Gulf is far less regulated than California hairdressers.

My inbox was clogged with responses to my recent prediction of US energy independence. This will be the most important change to the global economy for the next 20 years. So I shall go into more depth.

The energy research house, Raymond James, put out an estimate that domestic American oil production (USO) would rise from 5.6 million barrels a day to 9.1 million by 2015. That means its share of total consumption will leap from 28% to 46% of our total 20 million barrels a day habit. These are game changing numbers.

Names like the Eagle Ford, Haynesville, and the Bakken Shale, once obscure references on geological maps, are now a major force in the country?s energy picture. Ten years ago North Dakota was suffering from rampant depopulation. Now, itinerate oil workers must brave -40 degree winter temperatures in their recreational vehicles pursuing their $150,000 a year jobs.

The value of this extra 3.5 million barrels/day works out to $122 billion a year at current prices (3.5 million X 365 X $96). That will drop America?s trade deficit by nearly 25% over the next three years, and almost wipe out our current account surplus. Needless to say, this is a hugely dollar positive development.

These 3.5 million barrels will also offset much of the growth in China?s oil demand for the next three years. Fewer oil exports to the US also vastly expand the standby production capacity of Saudi Arabia.

If you want proof of the impact this will have on the economy, look no further than the coal ETF (KOL), which has been falling relentlessly in a rising market. Power plant conversion from coal to natural gas (UNG) is accelerating at a dramatic pace. Public utilities love ditching all the potential liabilities that come with coal. That leaves China as the remaining buyer, and their economy is slowing.

It all makes the current price of oil at $95 look a little rich. As with the last oil spike four years ago, this one is occurring in the face of a supply glut. Cushing, Oklahoma is awash in Texas tea, and the Strategic Petroleum Reserve stashed away in salt domes in Texas and Louisiana is at its maximum capacity of 727 million barrels. It is concerns about war with Iran, fanned by elections in both countries that have taken prices up from $77 since the fall.

My oil industry friends tell me this fear premium has added $30-$40 to the price of crude. This is why I have been advising readers to sell short oil price spikes to $110. The current run up isn?t going to take us to the $150 high that we saw in the last cycle. It is also why I am keeping oil companies with major onshore domestic assets in my long-term model portfolio, like Exxon Mobile (XOM) and Occidental Petroleum (OXY).

Energy independence is also making a huge contribution to the US jobs picture. According to energy guru, my old friend, Daniel Yergin (you must read his Pulitzer Prize winning book on oil, The Prize), energy has created 1.7 million jobs in the last 5 years, and will double that in the next three. It has also created $60 billion a year in new revenues from taxes and oil leases for the US Treasury. Ironic as it may seem, the job that pushes the headline unemployment rate down to the Fed?s vaunted and magical 6.5% target could be for a roustabout.