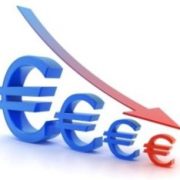 The market marked our Currency Shares Euro Trust (FXE) August, 2014 $136-$138 in-the-money bear put spread at its maximum value of $2.00 last Wednesday. So I accepted the invitation to take profits and get out.

For purposes of my P&L I?ll assume that it costs you two cents to execute, so I posted a selling price of $1.98. That should add 151 basis points to your 2014 performance.

Since I strapped this trade on three weeks ago, the beleaguered continental currency has plunged a whopping two cents against the greenback. The euro has technically broken down on the charts, so lower levels beckon. My European vacation is getting cheaper by the day.

The economic fundamentals certainly argue for a lower Euro ($10 for a Big Mac!!). This may be a rare case where it pays to chase a trade, so I rolled down the strikes and put this trade back on.

There is no way out for the European economy to escape its current malaise than to devalue its currency, by a lot. With China growing at 7.5% Japan at 4%, the US at 2%, Europe is the slowest growing economic block in the world, struggling to reach 1%.

The only way out is for Europe to lower interest rates. European Central Bank president Mario Draghi has nailed his colors to the mast, convincingly stating that he is doing exactly that.

For good measure, he is throwing in a healthy dose of quantitative easing, as well. As a result $1.28, and then $1.26 to the dollar are now within easy reach.