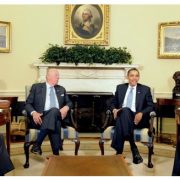 Having spent time as an economics professor at MIT, Dean of the University of Chicago business school, Treasury Secretary, and Secretary of State, George Schultz has certainly covered all the bases. Now 89, he is the senior statesman and eminence gris of San Francisco, as well as a major philanthropist.

When I read his bio, I feel like my own life in comparison has been wasted watching Archie Bunker on TV in All in the Family. I first ran into George in the seventies as the CEO of Bechtel, and pursued him while in the White House Press Corp. I have since occupied the box next to his in the San Francisco Opera, and joined him in several Marine Corps charities.

George said that America?s health care headache started in WWII, when wages and costs were controlled, but not benefits. So companies competed for labor by offering increasingly generous, tax free benefits programs. And when something is free, you lose a lot of it, driving total costs through the roof. The end result is large misallocations of resources that you don?t see in other businesses.

Private American companies have made possible tremendous medical advances for a profit, and this system should be allowed to continue. But we need to incentivize future advances with cost containment. We need a universal, subsidized plan that heads off intergenerational conflict by not allowing healthy young people to escape obligations, nor denying older people with preexisting conditions.

Allowing consumers to buy private insurance across state lines, which is now impossible, would be a start. Today your average 65 year old lives for 20 years, compared to 13 years in 1965, and two years in 1900. An equitable system would enable those who wish to continue working after 65, without burdening employers with health care costs, adding $1 trillion to GDP that will help us pay for this all.

Quote of the Day: October 25th

The New War on Hedge Fund Managers
Scroll to top