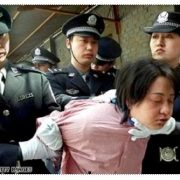 Yang Yanming was slowly led from his cell by two burly uniformed guards in Beijing?s central prison to a waiting van in the courtyard guards, his hands cuffed behind him and his head bowed. Once in the vehicle, he was strapped to a gurney, hooked up to an IV, and given a highly concentrated injection of sodium pentobarbitol. Minutes later, a technician checked his pulse, and pronounced him dead. He then pulled out a scalpel, made a long vertical incision down Yang?s abdomen, and deftly harvested his organs. Placed in ice chests, they were rapidly sold off on China?s booming organ market.

The unfortunate Yang was a former stock trader convicted of embezzling $9.52 million from Galaxy Securities during 1997 to 2003. Once arrested, his trial, conviction, and execution were carried out in rapid fire succession in a matter of months. No hanging around death row for decades here, as is common practice in the US. Yanming never revealed where the money went, according to the Beijing Evenings News, possibly because he never committed the crime. We, and Yang?s family, will never know.

The move was part of a broader effort by regulators in Beijing to crack down on rampant corruption in the securities industry. Still, the more people they execute in the Middle Kingdom, about 10,000 this year, the more they remain the same. Great for the human organ business, but not so good for white collar crime prevention.

During the last three decades, a series of politically inspired ?get tough on crime? campaigns in the US, started by Ronald Reagan, has produced one of the biggest lock ups is human history. Inmates held by federal and state penal systems has soared from 500,000 to 3 million, and the numbers are growing my 200,000 a year. The American prison system has grown so large that it rivals the old ?Archipelago? in the Soviet Union during the 1930?s. The urban legend about the government building a vast secret complex of concentration camps is true.

One out of 100 Americans is behind bars, and one out of 35 is either in jail, or on probation. The cull has been particularly severe among ethnic minorities, with one out of three African Americans either in prison, on probation, or related to someone who is.

There has been a vast expansion in America of the definition of criminality. For example, tax evasion only became an imprisonable offence in 1984. A Supreme Court ruling extended the meaning of ?cocaine? to include crack swooped up tens of thousands. Widening the scope of old laws lowering the bar for conviction has also occurred in firearms ownership, hate crimes, the environment, pornography, the collection of Indian artifacts on federal land, and of course securities offenses. The closure of dozens of state hospitals around the country has also dumped large numbers of the mentally ill into the penal system, making prisons the new de facto mental hospitals.

There has also been a huge bull market in retribution that has contributed to the upsurge. Thanks to three strikes laws, an offender who stole a 95 cent cassette tape from a Seven Eleven in California got 30 years. The judge said his hands were tied. Teenaged children in Florida, not old enough to drive, are getting life sentences. Bernie Ebbers and Ken Lay might have gotten away scott free in the seventies, or at worst, caught five year sentences. Today 25 to life is standard for such offenses, an effective life sentence for a CEO or senior hedge fund manager. Madoff?s 150 year sentence seems pointless. It is not going to get people their money back.

Law enforcement experts, social workers, and even mathematicians all agree that this ?get tough? stance is having absolutely no impact on crime prevention. For a start, no one commits a crime with the intention, or even the remote expectation of getting caught. You can raise sentences to 1,000 years and it will still make no difference.

Many, like Ralph Cioffi and Matthew Tannin, who ran the Bear Stearns hedge funds, are not even aware that their activities might be perceived as illegal. The war on drugs has been a complete failure, with prices lower, narcotics more available, and more kids addicted than 30 years ago, despite DEA budgets running in the tens of billions. With state and federal prosecutors now on the warpath against hedge fund managers, bankers, and aggressive deal makers in real estate, the realm of the illegal is about to undergo yet another enormous expansion. But try telling that to a politician running for office in a borderline district. Crooks are not allowed to vote.

Demographics are the true origin of crime. The number of young males in the population peaked in the early seventies and has been on a downtrend ever since, along with crime rates. Crime is even immune to the economic cycle. You may not have noticed that crime went down last year, even though we were facing the worst economic and employment crisis in eight decades.

Some attribute the fall off in male population to the legalization of abortion by Roe v. Wade in 1973, which led to an immediate drop in newborns tossed into dumspsters, raised by the state, and living a life of crime. Malcolm Gladwell even has a pet theory that falling crime rates are due to the removal of lead from gasoline, also in 1973, which caused lead poisoning, mental illness, and a propensity for violence.

The big problem with the war on crime is that, while generating no tangible results, it is massively expensive. Some $80 billion will be spent incarcerating America?s state and federal prisoners this year, a figure that is bleeding cash starved state and municipal governments white. California spends more on prisons than on teachers. Governor Jerry Brown has tried to cut corners by packing prisons to 300% of their legal capacity, offloading inmates to unwilling counties, and by offering health care that a Federal judge has ruled ?cruel and unusual punishment.? Most prison gyms and libraries have been converted to dorms packed with three bed bunks end to end. In a desperate measure, the state is freed 20,000 nonviolent prisoners because it can?t afford to house or feed them.

If we adopted Chinese style crime and punishment, we?d save the $65,000 a year it costs to lock up miscreants like Bernie Madoff in high security facilities. Just execute the sons of bitches. The US could recover leadership in the human organ business, and we could convert unused prisons into schools, killing three birds with one stone.

There is another alternative to locking people up and throwing away the key. How about reforming the legal system? Take punishment out of the hands of politicians and bring them more in line with the offense. Perhaps 20% of the Golden State?s 270,000 inmates are serving long terms for possessing small baggies of pot that would earn them at worst a traffic ticket in most other Western countries, or nothing at all. It might also be worth investing in some education for inmates to reduce the appalling rate of recidivism from the current 70%. Prisons officials now give released inmates $25, dump them on a street corner in a crummy neighborhood, and tell them ?See you when you come back.? Shorter prison sentences and longer probation might be another economical answer.

This would all require some brave political leadership around an unpopular issue. Don?t hold your breath. In the meantime, check out this cool link to the used kidney market. The next kidney up for sale may be yours.

Quote of the Day: October 26th
Scroll to top