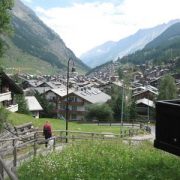 Many apologies to the hundreds of listeners who were cut short during the broadcast of my biweekly strategy webinar on Wednesday, August 1. Despite the Herculean efforts of the staff, sometimes the technology doesn?t deliver as promised. This was one of those days.

For a start, getting the GoToMeeting software to work on an iMac is a bit like trying to shove a round peg in a square hole. While the scenery in Zermatt is spectacular, the local broadband is still stuck in the 19th century. I did a speed test and discovered, to my horror, that I was clocking 2 mb/second, compared to the blistering 100 mb/second that I get at home.

The satellite link connecting Europe with the US can go down at any time. On top of that, the London Olympics has been sucking up much of the continent?s bandwidth, slowing down everyone?s communications to the speed of molasses in winter.

There were some local issues that further complicated matters. It is the Swiss National Day, or the country?s equivalent to the Fourth of July. So everyone had the day off, and many spent the day surfing the net, further slowing speeds. Fireworks went off constantly, and the party next door started to spill over into my own chalet.

Right at 6:00 pm local time, the church bells started ringing, just as my webinar was getting started. I hope you were able to hear them in the background. Oh, and I think some local goats were chewing on my fiber optic cable. When the call came in that the audio was intermittent, I had little choice but to can the broadcast.

Please go to my website at www.madhedgefundtrader.com and log in. There you will find the PowerPoint for today?s webinar posted, along with all other past strategy webinars. I look forward to hearing from you again when I return to the 21st century next week and have US grade hardware and communications at hand. I?ll be broadcasting from a PC, so that the live Q&A chat window will be restored as well.

After my failed attempt, I headed to central Zermatt to join in the celebrations. I found the main street packed shoulder to shoulder with at least 10,000 revelers. Traditional Swiss music groups played tunes like Yankee Doodle and The Stars and Stripes Forever. Businesses had tables in front selling every imaginable kind of food. They were slinging out fondue, raclette, something called cholera, bratwurst, flamenkuche, and sushi as fast as they could make it. The beer and wine flowed freely, and people of every nationality were in an ebullient mood. I matched every stop at a food stand with two at the bakery tables. The waste line suffered.

As we approached 10:00 pm, the fireworks increased in crescendo. Then three huge signal fires were set on the surrounding mountain peaks, and the festivities moved into overdrive. They clearly do not have the same restrictions as at home, as every juvenile delinquent had an armload of skyrockets, roman candles, and firecrackers, which they put to use with reckless abandon.

Just as the town began its main display, a huge thundercloud barreled up from Italy. We witnessed an awesome duel, with enormous lightening strikes on the Matterhorn challenged by the immense booming of fireworks over the village. As we were deep in an Alpine valley, the reverberating echoes off of the surrounding mountain walls were superb. Finally, a torrential downpour sent everyone scampering for the cover of the overhanging eves of chalets.

In the meantime, good luck and good trading.