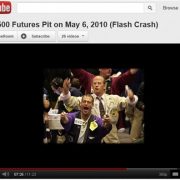 Those who lived through the cataclysmic ?flash crash? that occurred precisely at 2:45 pm EST on May 6, 2010, have been dreading a replay ever since. Their worst nightmares may soon be realized.

That is when the Dow Index (INDU) dropped a gob smacking 650 points in minutes, wiping out nearly $1 trillion in market capitalization. On that day, some ETF?s saw intraday declines of an eye popping 75% before recovering. A flurry of litigation ensued where many sought to break trades as much as 99% down from the last indication, some successfully.

The true reasons for the crash are still a matter of contentious debate. Many see a smoking gun in the hands of the high frequency traders who account for so much of the daily trading volume. But I happen to know that many of these guys pulled the plugs on their machines and went flat as soon as the big move started.

I think that it was the obvious result of too many people following similar models in markets with declining liquidity. The ease of instant execution through the Internet was another contributing factor. It also could be a symptom of no growth economies and lost decades in the stock market. The increasing short-term orientation of many money managers also played a hand.

Mathematicians who follow chaos theory and ?long tail events? known as ?black swans? argue that the flash crash was not only inevitable, it was predictable. They are also saying that the next one could be far worse.

Since then we have suffered several mini flash crashes. These include the recent $200 collapse in gold, a $5 plunge in silver, a five-cent gyration in the Euro, and a ten-cent gap in the Swiss franc. Notice that these ?flash? events only happen on the downside, and that we don?t have flash melt ups.

In many respects, traders and portfolio managers dodged a bullet on that fateful day. What if it had happened going into the close? Then assets would have been marked to market less $1 trillion, and the Asian openings that followed hours later would have been horrific. This could have triggered a series of rolling flash crashes around the world from time zone to time zone that would have caused several trillion more in losses. Those losses eventually did happen, but they were spread over several more months at a liquidation rate that could be absorbed by the markets.

Regulators claim that they have reduced the risks of a flash crash through the enforcement of daily trading limits across a broader range of financial instruments. I am not so sure. During a real panic, preventing people from unloading risk is almost an impossible feat. I know because I have lived through many of them.

In the meantime, the S&P 500 continues its inexorable rise well above the exact point at which the last flash crash started, at 1,160. We are now 55% above that last flash point. Avoid, like the plague, shorting leveraged naked puts on anything. It is the best way to wipe out your entire equity that I know of.

Like me, you are probably too old to start life over again with a job at McDonald?s, and they probably would take you anyway.

Cashing In On Obamacare
Scroll to top