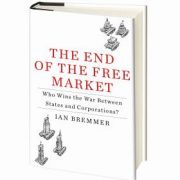 My friend, Ian Bremmer of the Eurasia Group, a global risk analyst who I regularly follow, will soon publish another book entitled The End of the Free Markets: Who Wins the War Between States and Corporations. I find this highly depressing, as it takes me as long to read one of Ian?s books as it takes him to write another one. To read a review of his highly insightful tome published in 2008, The Fat Tail: The Power of Political Knowledge for Strategic Investing, please click here. The world is reaching a tipping point. For the past 40 years, global multinationals with unfettered access to capital, consumer, and labor markets have driven the world economy. There is now a new competitor on the scene, the ?state capitalist,? where political considerations trump economic ones in the allocation of resources. Of course, China is the main player, joined by several other emerging nations. The middle kingdom has posted double digit annual growth for the past 30 years without freedom of speech, economic rules of the road, and independent judiciary, and credible property rights. China?s leadership is clearly worried that Western style freedoms will enable wealth to be generated outside their control and be used to orchestrate their overthrow. Private Western companies can only engage in transactions, which stand on their own economically and deliver the short-term profits, which their shareholders demand. In China, long term political goals enable them to pay through the nose to obtain stable supplies of oil, gas, minerals, and materials. That keeps the country?s massive work force employed, off the streets, and politically neutered. The bottom line is that there are now two competing forms of capitalism. The recent financial crisis has accelerated their entrance to the global stage, moving us from a G7 to a G20 dominated world. Globalization is not ending, but it is definitely entering a new chapter. For those of us who read tea leaves to ascertain long term economic trends, this will be a must read. ?

The History of Technology
Scroll to top