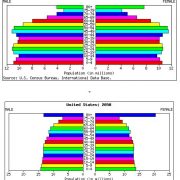 That means enormous demand for the low end of the housing market, apartments in multi-family dwellings. Many of our new citizens will be cash short immigrants. They will be joined by generational demand for limited rental housing by 65 million Gen Xer’s and 85 million Millennials enduring a lower standard of living than their parents and grandparents. These people aren’t going to be living in cardboard boxes under freeway overpasses.

The trend towards apartments also fits neatly with the downsizing needs of 80 million retiring Baby Boomers. As they age, boomers are moving from an average home size of 2,500 sq. ft. down to 1,000 sq ft condos and eventually 100 sq. ft. rooms in assisted living facilities. The cumulative shrinkage in demand for housing amounts to about 4 billion sq. ft. a year, the equivalent of a city the size of San Francisco.

In the aftermath of the economic collapse, rents are now rising dramatically, and vacancies are shrinking. Fannie Mae and Freddie Mac financing is still abundantly available at the lowest interest rates on record. Institutions combing the landscape for low volatility cash flows and limited risk are starting to pour money in.