The other shoe has dropped.

No more waiting for it as it was only a matter of time, but it was going to happen soon enough.

The acceleration of the race down to zero for brokerage commissions has moved into full throttle.

In a bid to engage new customers, especially millennials, J.P. Morgan (JPM) will offer its customers 100 free stock or ETF trades for one year.

The new service will be available on Chase’s mobile banking app called “You Invest” and also does not require a minimum balance as do so many of the competitors.

Last year, J.P. Morgan was still charging customers a horrific $24.95 per trade, a ridiculous sum in an age of brokerages slashing fees left and right.

Recently, I chronicled the start-up fin-tech brokerage Robinhood, which rolled out the zero-commission model to the chagrin of the traditional brokerages on the verge of major disruption.

Well, Wall Street has stood up and taken notice. There is no way back from this new normal.

The catalyst for J.P. Morgan to change direction was its lack of competitiveness in the digital brokerage space and a free model of luring in business is seen as a quick recipe to correct its ills.

J.P. Morgan has pumped in $300 million in the past two years into digital initiatives but still lacks the volume it was hoping for. This could help capture fresh accounts that could eventually turn into a meaningful business.

Freemium models made popular in Silicon Valley are catching fire in other parts of the economy as potential customers can dabble with the service first before committing their hard-earned money.

This is dreadful news for the fin-tech brokerage industry as it indicates a whole new level of acute pressure on margins and revenue.

The brokerage business has been under fire the past few years after regulators discovered Wells Fargo (WFC) was cunningly ushering clients into higher fee trading vehicles, taking a larger cut of commissions.

Wells Fargo did everything it could to rack up costs for high net worth clients. The atrocious behavior was a huge black eye for the entire industry.

Technology has forced down the cost of executing a trade and each additional trade is almost nil after fixed costs because of software and hardware carrying out these functions.

E-brokerages are set for a rude awakening and their cash cows are about to be disrupted big time.

Charles Schwab (SCHW) has 11.2 million brokerage accounts, and no doubt clients will get on the ringer and ask why Schwab charges an arm and a leg to execute trades.

Schwab might as well start charging clients for emails, too.

The cut in commissions has already started to affect margins with Schwab revenue per trade sliding from $7.96 in 2017 to $7.30 in the most recent quarter.

TD Ameritrade (AMTD) is experiencing the same issues with revenue per trade of $7.83 last year dropping to $7.30 last quarter.

The beginning of the year provided e-brokers with respite after euphoric trading sentiment pushed many first-time equity buyers into the markets, making up for the deceleration in revenue per trade.

However, that one-off spike in volume will vanish and margins are about to get punctured by fin-tech start-ups such as Robinhood.

J.P. Morgan’s move to initiate free trades is a huge vote of confidence for upstart Robinhood, which charges zero commission for ETFs, option trades, and equities.

I recently wrote a story on the phenomenon of Robinhood, and the new developments mean the shakeout will happen a lot faster than first anticipated.

TD Ameritrade, E-Trade (ETFC), Fidelity, and Charles Schwab could face a deeply disturbing future if Silicon Valley penetrates under the skin of this industry and flushes it out just like Uber did to the global taxi business.

E-Trade shares have experienced a healthy uptrend and it is now time to pull the rip cord with the rest of these brokerages.

It will only get worse from here.

Investors should be spooked and avoiding this industry would be the right move at least for the short term.

The golden age of trading commissions is officially over.

Turning this industry into a dollar store variety is not what investors want to hear or hope for.

The decimation of commission fees has coincided with the rise of passive investing.

Only 10% of trades now are performed by active traders.

Brokerages earn demonstrably less with passive investing as the volume of trading commission dries up with this buy-and-hold-forever strategy.

Index funds have been all the rage and quite successful as the market has returned 400% during the nine-year bull market.

When the market stops going up, the situation could get dicey.

The real litmus test is when a sustained bear market vies to implode these ETFs and what will happen with a massive unwinding of these positions.

A prolonged bear market would also scare off retail investors from executing trades on these e-brokerages.

Many will take profits at the speed of light not to be seen or heard again until the next sustained bull market.

Moreover, it is certain the global trade war is scaring off retail investors from their trading platforms as the uncertainty weighing on the markets has thrown a spanner into the works.

Tech has been the savior to the overall market with the top dogs dragging up the rest, but for how long can this continue?

Other industries are experiencing minimal earnings growth and tech cannot go up forever.

Regulations are starting to bite back at the once infallible tech narrative.

Chinese tech is also having its own headaches where Tencent has been perpetually stymied by local regulators blocking access to gaming licenses needed to monetize blockbuster video games.

Tencent missed badly on its earnings report and there is no end in sight to the delay.

Social media has been torn apart as of late and the weaponization of its platforms is accelerating with government operations moving onto them to fight against each other.

Interest rate revenues are the saving grace for these brokerages that account for 50% or more of revenue.

Millennials are hard-charging into Silicon Valley start-ups such as Robinhood, and the traditional brokers’ clientele are mainly directed on the lucrative middle-age cohort.

The next development for e-brokers is who can best harness artificial intelligence to best enhance their customer experience and products.

If the Charles Schwab’s of the world must compete with nimble Silicon Valley start-ups in technology, then they will find a hard slog of it.

One of these big e-brokers is likely to implode setting off another round of consolidation.

The race down to zero is fierce, and I would avoid this whole industry for now.

There are better secular stories in technology such as the e-gaming phenomenon capturing the hearts and minds of global youth. 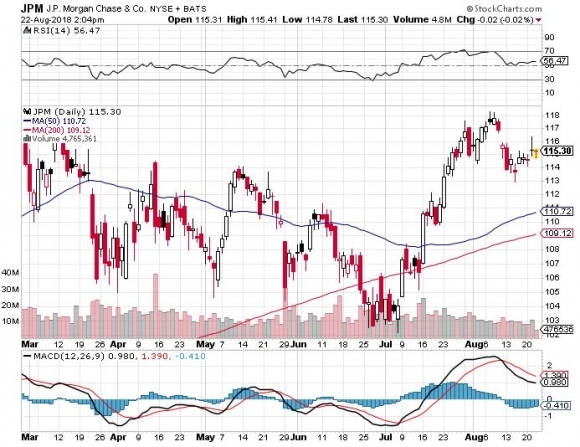 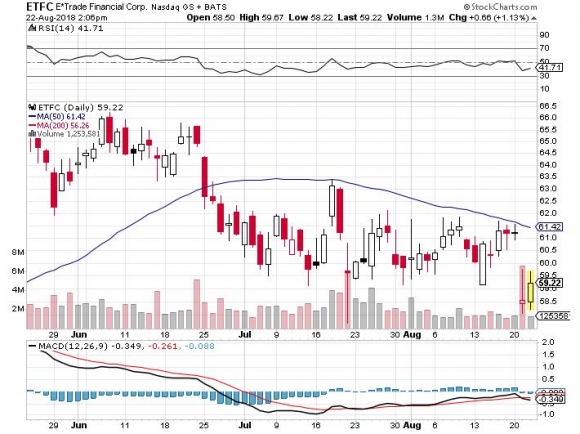 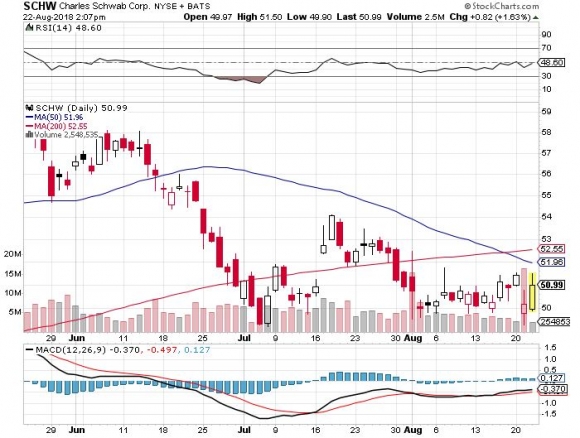 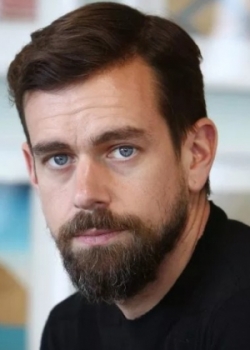