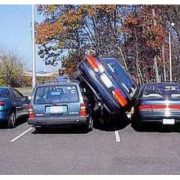 I tell people at my strategy luncheons that living in the San Francisco Bay area is like living in the future. There is an explosion of high tech innovation going on here, and we locals often find ourselves the guinea pigs for the latest hot products. However, sometimes the future is not such a great place to be.

I learned this the other day when I received a parking ticket in the mail. I didn?t recall finding a notice of violation tucked under my windshield wiper in the recent past, so I looked into it. To my chagrin, I learned that the city is now outfitting its busses with video cameras pointing forward and sideways. The digital recordings are then transmitted to parking control officers sitting behind computers for review.? They issue tickets which are mailed to the registered owner of the vehicles.

San Francisco suffers from one of the worst parking nightmares in the country. The streets were never planned, they just sort of happened on their own during the frenzy of the 1849 gold rush. They were built to handle the traffic of horses and carriages, and later cable cars, not the crush of traffic we get today.

Sky-high real estate prices have driven millions into the suburbs across the bridges over which they must commute. So parking has always been in short supply and it is very expensive. When I drive into the city for a Saturday night dinner, sometimes the parking tab is more expensive than the meal.

Newly minted millionaires from tech IPO?s are now buying vintage Victorian homes, and then retrofitting garages underneath them. Every time this is done, it eliminates another parking spot on the street to make room for the driveway. So while the traffic is increasing, the number of parking spots is actually declining.

The city originally installed the cameras to catch offenders driving in bus lanes during rush hour. When they discovered that the cameras also captured the license plates of illegally parked cars they expanded the program. Last year 3,000 such tickets were issued.

The program has been so successful that the cash strapped city will greatly expand it this year. And with a great San Francisco track record to point to, the firm selling the system is planning on going nationwide. Soon it will come to a city near you. Like I said, sometimes the future is not such a great place to be.

Parking in San Francisco Can be Tight

Cheniere Energy (LNG) Gets the Green Light
Scroll to top