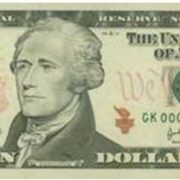 Any trader will tell you the trend is your friend and the overwhelming direction for the US dollar for the last 222 years has been down.

Our first Treasury Secretary, Alexander Hamilton, found himself constantly embroiled in sex scandals. Take a ten dollar bill out of your wallet and you?re looking at a world class horn dog, a swordsman of the first order.

When he wasn?t fighting scandalous accusations in the press and the courts, he spent much of his six years in office orchestrating a rescue of our new currency, the US dollar.

Winning the Revolutionary War bankrupted the young United States, draining it of resources and leaving it with huge debts. Hamilton settled many of these by giving creditors notes exchangeable for then worthless Indian land west of the Appalachians.

As soon as the ink was dry on these promissory notes, they traded in the secondary market for as low as 25% of face value, beginning a centuries long government tradition of stiffing its lenders, a practice that continues to this day.

My unfortunate ancestors took him up on his offer, the end result being that I am now writing this letter to you from California?and am part Indian.

It all ended in tears for Hamilton, who, misjudging former Vice President Aaron Burr?s intentions in a New Jersey duel, ended up with a bullet in his back that severed his spinal cord.

Since Bloomberg machines weren?t around in 1790, we have to rely on alternative valuation measures for the dollar then, like purchasing power parity and the value of goods priced in gold.

A chart of this data shows an undeniable permanent downtrend, which greatly accelerates after 1933 when FDR banned private ownership of gold and devalued the dollar.

Today, going short the currency of the world?s largest borrower, running the greatest trade and current account deficits in history, with a diminishing long term growth rate is a no brainer.

But once it became every hedge fund trader?s free lunch and positions became so lopsided against the buck, a reversal was inevitable. We seem to be solidly in one of those periodic corrections, which began a few years ago, and could continue for months or even years longer.

The euro has its own particular problems, with the cost of a generous social safety net sending EC budget deficits careening. ? Add to that the gargantuan cost of a burgeoning refugee crisis.

Use this strength in the greenback to scale into core long positions in the currencies of countries that are major commodity exporters, boast rising trade and current account surpluses and possess small consuming populations.

I?m talking about the Canadian dollar (FXC), the Australian dollar (FXA) and the New Zealand dollar (BNZ), all of which will eventually hit parity with the greenback. Think of these as emerging markets where they speak English, best played through the local currencies.

For a sleeper, buy the Chinese Yuan ETF (CYB) for your back book. A major revaluation by the Middle Kingdom is just a matter of time.

I?m sure that if Alexander Hamilton were alive today he would counsel our modern Treasury Secretary, Jack Lew, to talk the dollar up, but to do everything he could to undermine the buck behind the scenes, thus, over time, depreciating our national debt down to nothing through a stealth devaluation.

Given Jack Lew?s performance so far, I?d say he studied his history well. Hamilton must be smiling from the grave.

A Chart of the US Dollar Priced in Hard Goods 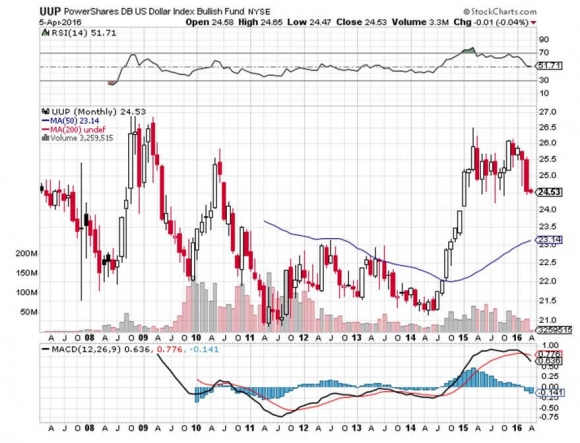