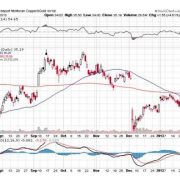 The Trade Alert Service of the Mad Hedge Fund Trader posted a new all time high today, pushing its two-year return up to 66%. The Dow average booked a miniscule 12% gain during the same time period. The industry beating record was achieved on the back of a spectacular January, which so far had earned readers a mind blowing 10.92% profit.

Right after the January 2 opening, I shot out Trade Alerts urging readers to take maximum long positions in the S&P 500 (SPY) and the Russell 2000 small cap index (IWM). Later, I piled on longs in copper producer Freeport McMoRan (FCX) and American Insurance Group (AIG). I balanced these out with aggressive short positions in the Treasury bond market (TLT), and the Japanese yen (FXY), (YCS). Only my position in Apple (AAPL) has cost me money this year.

After grinding around just short of the previous top for four tedious and painful months, the breakout was certainly welcome news for many. Once I wracked up an unprecedented 25 consecutive profitable trades over the summer, things went wobbly. The Fed unleashed an early, surprise, pre election QE3. Then inventors stopped drinking the Apple (AAPL) Kool Aide en masse. The extent of the tax loss selling after the Obama win was also a bit of a shocker. Maybe I should take longer vacations.

Then the ?aha? moment came. I concluded at the end of November that the multiple political crises facing us were nothing more than hot air. This meant the risk markets were poised to launch multi month bull runs to new all time highs, and I positioned myself, and my followers, accordingly. In the end, that is exactly what we got.

Global Trading Dispatch, my highly innovative and successful trade-mentoring program, earned a net return for readers of 40.17% in 2011 and 14.87% in 2012. The service includes my Trade Alert Service, daily newsletter, real-time trading portfolio, an enormous trading idea database, and live biweekly strategy webinars. To subscribe, please go to my website at www.madhedgefundtrader.com, find the ?Global Trading Dispatch? box on the right, and click on the lime green ?SUBSCRIBE NOW? button.

Catching Up With Downton Abbey