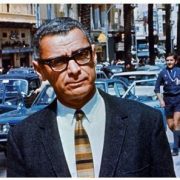 I had been filled with great sadness when I had learned of the passing of an old friend and mentor, Roy Essoyan, the former Tokyo bureau chief for the Associated Press.

When I was a young, wet behind the ears financial journalist in Japan during the early seventies, Roy had the charity to take me under his wing and teach me a few tricks of the trade.

We often met for lunch at the Foreign Correspondents? Club of Japan, partaking in the excellent cheeseburgers there, and battling wits over a popular dice game called ?ballout?.

I gathered up what crumbs of wisdom Roy would graciously part with, he careful never to compromise a pending AP scoop. He gave me enough encouragement to give me hope of breaking into this unassailable profession.

The Club was then a hotbed of intrigue between transient writers, foreign intelligence agents, assorted soldiers of fortune, mercenaries, Japanese lobbyists, and opportunists from giant multinational corporations.

There I met Walter Cronkite, John Glen, Deng Xiaoping, Yasser Arafat, Ronald Reagan, Margaret Thatcher, Rupert Murdoch, and countless others. It was a great place for me to end up at the hardened age of 22.

Roy was born in a remote Japanese fishing village in 1919, his parents Armenian refugees from the Russian Revolution. That polyglot background enabled him to become fluent in Russian, Japanese, and finally English.

He was stateless until his early thirties. The outbreak of WWII trapped him in Shanghai. Somehow he survived by writing for an English language newspaper there while avoiding internment in a Japanese concentration camp.

After the war, he made his way to Tokyo, where his language skills landed him work for the Associated Press. Later assignments took him to Hawaii, Beirut, Cairo, Vietnam, Hong Kong, and then back to Tokyo. At press conferences he palled around with Nikita Khrushchev in his native Russian. His claim to fame came when he broke the story of the Soviet-Chinese rift in 1957, which earned him a deportation.

Roy retired to the North Share of Oahu in 1985, within earshot of the pounding giant waves of Waimea Bay and with a fabulous view of the Pacific.

Roy was a man who didn?t suffer fools gladly, but still maintained a dry sense of humor. His suspicion of governments knew no bounds, having witnessed many atrocities first hand.

Roy instilled in me a great instinct to enjoy and participate in history, as well as to survive it. I don?t think I?ve stopped moving since.

When I made the switch from journalism to trading, Roy used to chide me about me never actually producing anything, just poking away at a computer to generate numbers.

I responded that I didn?t see a future in a profession that paid peanuts and was dominated by chain smoking, philandering alcoholics who are now all dead. He knew all the people who I knew and he understood.

When I last visited him at his Hawaiian abode a couple years ago we paged through together scrapbooks of 70-year-old yellowing cuttings of his old stories. They spoke of the corruption, poverty, and inequities then rampant in lawless Shanghai, and the build up to war with Japan.

I?ll never forget how he described small children plucking silk cocoons out of boiling water with their calloused and senseless bare hands in Chinese sweat shops.

When I heard his golf handicap was rising, I knew the end was coming. Roy stayed sharp and irreverent almost to the end. When he died, I knew they wouldn?t make them like him anymore.

Roy Essoyan of the Associated Press