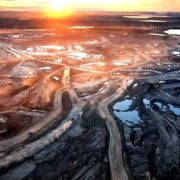 Anyone who has any illusions about the Canadian tar sands business should take a look at the picture below. I?m not a fanatic, sandal wearing, organic bean sprout eating environmentalist, but just looking at it tells you that this is an eco-disaster of Biblical proportions.

A $50 billion investment by several firms over the last decade is now producing 750,000 barrels/day, and another $100 billion in capital is headed north. You have to cut down a whole forest, remove two tons of peat, then another two tons of sand, and burn 100 barrels of oil equivalent to heat rivers of water to steam, just to produce a single miserable barrel of oil.

This gives you the world?s highest production cost, thought to be $80-$100/barrel. There are now 50 square miles of sludge ponds in Northern Alberta leaching a witch?s brew of poisons into the water supply, which has caused the local cancer rate to explode tenfold. We?re not just talking about a few sick geese here.

Canada is the largest foreign supplier of oil to the US, accounting for 19% of our total, and half of that is coming from tar sands. The whole industry was built as a hedge against some Third World War, Armageddon type total cut off of all foreign crude supplies that would drive prices to $500/barrel, making all of this hugely profitable someday.

Maybe the owners think they can get away with this because it is in the middle of nowhere. An army of lawyers hitting these projects with a tidal wave of litigation think otherwise. This is the reason why environmentalist opposition to the Keystone pipeline was so acerbic. They view the tar sands as the world?s single largest source of greenhouse gasses. With North Dakota?s production expected to exceed total Canadian tar sands production by next year, and with challenges now arising from the seemingly endless new supply of cheap natural gas, the whole project may become redundant

After looking at this picture and analyzing the numbers, you have to ask if it is really worth it, just so you can drive your Hummer to Wal-Mart. It all makes the future performance of major producer, Suncor Energy (SU), very suspect.