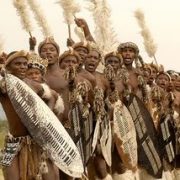 It looks like the next ?blue light special? will be offered in South Africa (EZA), (AFK) Apparently, the retail giant, Wal-Mart (WMT), got the memo that the country is a great place to invest (click here for ?On Safari for Trades in South Africa?). It?s $4.3billion bid for retailer Massmart is a huge vote of confidence for that emerging nation.

My old friend, Carl Van Horn, the former chairman of JP Morgan Investment Management, taught me a golden rule a long time ago that has proved invaluable over the decades. Follow the money. Go to the industries and countries where the big companies are making their direct investments, because the stock market always follows.

What is Wal-Mart seeing in South Africa, with unemployment at 25%, and a simmering race war percolating just below the surface? Perhaps it believes that skyrocketing prices for the gold and diamonds, the beleaguered country exports will trickle down to the main economy, cutting the jobless ranks and accelerating development. Booming economies tend to have a salving effect on social problems too.

That would be a boon for retailers selling not only to a rising middle class, but to the rest of emergent Africa as well (click here for ?Feel Like Investing in a State Sponsor of Terrorism?). Wal-Mart is not alone in this leap of faith. Check out the ETF for this fascinating country and consider scaling in on the current big dip.

Headed for the Blue Light Special?

I Told You to Buy Mongolia!
Scroll to top