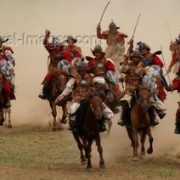 The global resource frenzy has grown so heated that money has begun pouring into the marginal fringes of the universe. The Mongolian stock market has been one of the world?s best performers over the last three years, posting two back to back 100% gains.

I have been pounding the table on Mongolia for over three years now, as the fundamentals were stacking up nicely for it to become a high growth pioneer market (click here for the call). Never mind that you can?t buy it unless you become a resident of Ulan Bator and pay with local currency. But the indirect plays I recommended are did extremely well, including Ivanhoe Mines (IVN) and Rio Tinto (RTP). Government officials were in New York recently negotiating with NASDAQ to take over the management of their nascent exchange, which even after the double, has only 300 listed companies with a total market capitalization of only $1 billion.

There?s nowhere I won?t go to make a buck, so I had to sit up and pay attention when friends in Tokyo told me that the next big Asian equity play will be in Mongolia. Genghis Khan?s ancestral land has enormous mineral resources which make it a natural commodity play (did he know?), and it has one of the world?s most GDP friendly population pyramids.

But incompetent government administrators with antiquated Soviet era sentiments managed to kill every development opportunity in the crib with onerous windfall taxes and harsh joint venture restrictions. The resources stayed in the ground. National elections finally turned over the regressive administration in 2008, and the anti-growth tax regime was dumped.

Mongolia has inked a deal with Ivanhoe Mines and Rio Tinto to develop the massive Oyu Tolgoi mine, the world?s largest undeveloped copper resource, which could lead to a doubling of the GDP in five years. We?re talking a gigantic 450,000 tons of copper and 330,000 ounces of gold a year. Friends have been e-mailing in the results of core drillings from Oyu Tolgoi, and it is clear that this is one of the richest ores ever discovered. Also on tap is the development of huge coking coal and uranium deposits.

The spillover benefits for the rest of the economy would be substantial. Now that visas are no longer impossible to get, as they were in my day, my Japanese and Chinese speaking trilingual son tells me that Ulan Bator has become the trendy place for American college grads fleeing unemployment at home.

Who knows? Give me a low enough PE multiple and I might even develop a taste for the country?s national dishes, sheep brains and fermented mare?s milk.

The Bulls Are Loose in Mongolia

Wal-Mart Is on Safari for Customers in South Africa