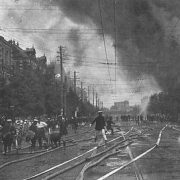 I don?t just think he hates me, he truly despises me. ?In fact, he does everything he can to put me out of business.

Take yesterday, for example, when the Federal Reserve Open Market Committee gave me and my views a complete thrashing. ?QE3 was the last thing in the world I was expecting because it was not justified by the current fundamentals. ?Most other independent analysts agreed with me, including several Fed govenors.

He could have let me off easy by announcing some minor back-door easings, like expanding his ?operation twist? to include mortgage-backed securities for the first time, or ceasing interest rate payments on deposits from private banks. ?But, no, Ben decided to make me look like a complete idiot, not by just announcing QE3, but one infinite in size that goes on forever. ?Talk about pouring salt on my wounds.

It?s not that I am not an all right guy. ?I am kind to children and small animals. ?I donate generously to many charities. ?I send my mother cards on her birthday (happy birthday mom!), even though she is 84 and not expected to last much longer. ?I even occasionally escort little old ladies across the street, although this is a holdover from my days as an Eagle Scout.

It?s just that Ben Bernanke and I don?t see eye-to-eye on a lot of important issues. He wants stocks to go up. ?As a hedge fund manager who plays from the short side more often than not when the economy is growing at a paltry 1.5% rate, I want them to go down. ?He wants bonds to go up too, as he clearly elicited with his ?twist policy? last year when he bought long term Treasury bonds and shorted overnight paper against it. ?I, on the other hand, want bonds to sell off because I know that when the bill comes due for all of this monetary easing, the crash will be momentous.

These are not the only matters we differ on. ?He wants to create jobs. ?He can wish this until the cows come home, but he?s not going to get them because of the gale-force demographic headwinds the country is now facing and the massive deleveraging by the public and private sector. ?The 6 million jobs we exported to China are never coming back.

However, all he has to do is make a mere mention of his desires, or even just mention the letter ?Q?, and asset prices go through the roof, forcing me to stop out of my shorts at losses. ?This is why I was in such a foul, acrimonious, and detestable mood during the first quarter, when stocks went up almost every day.

My problem is that Ben Bernanke isn?t the only person who dislikes me. ?President Obama doesn?t think much of me either. ?And it?s not because I refuse to buy a cold chicken dinner at his St. Francis Hotel fund raisers for $35,000, and $70,000 if I bring a date. ?He talks about jobs too. ?He frequently speaks about the need to improve our education system, even though I know he is poised to slash the budget for the Department of Education as part of some deal with the Republicans. ?Ditto for Social Security and defense.

Fortunately for me, I wrote off any prospect of getting a retirement check a long time ago and have made other arrangements, like becoming a hedge fund manager. Either the payments will be too small for me to live on, or they will be made in worthless Zimbabwean dollars.

I get along with Treasury Secretary, Timothy Geithner, OK, which keeps me on his ?must see? list whenever he stops in San Francisco on his way to Beijing to ask to borrow more money. ?But we go way back. ?There are only four people in U.S. history who can discuss Japanese monetary policy of the 1920?s in depth, and do it in Japanese just for laughs (it was clearly too easy, but they had to reflate after the 1923 Great Kanto Earthquake. ?Some things never change).

Two of them, Senator Mike Mansfield of Montana and Harvard professor, John K. Fairbank, died ages ago. ?So he is kind of limited in his choices. ?Besides, there are not a lot of people out there who can give him a 40 year view on the global economy, and I am one of them.

There are plenty of others who don?t think I am so hot. ?Try making a fortune in a market crash when everyone else is losing their shirt. ?While others in the locker room at my country club are slamming doors, tearing their hair out, and breaking golf clubs in half when they see the price feed on CNBC, I am chirping happily away about selling short at the top. ?I might as well be letting out a loud fart in Sunday church service. ?This explains why I stopped getting invitations to dinners ages ago.

It?s not that my relationship with Ben Bernanke is totally hopeless. ?When the demographic picture turns from a headwind to a tailwind and individuals and corporations cease deleveraging and return to re-leveraging, we?ll probably be reading from the same page of music. ?But according to the U.S. Census Bureau, the earliest this can happen is 2022. ?By then, he probably won?t be the Fed governor anymore and I won?t care if he likes me or not.

Besides, I may be able to make a new friend or two in the meantime. ?If Mitt Romney wins the presidential election he says he?ll fire Ben Bernanke on his first day in office. ?He can?t really do that, but Ben?s term does expire a year later. ?His two most widely rumored picks to fill the post are president of the Federal Reserve Bank of Dallas, Richard Fisher, and Stanford University professor, John Taylor.

These two are not in the least bit interested in all this quantitative easing malarkey. They are much more similar in philosophy to Herbert Hoover?s Treasury Secretary, Andrew Mellon, who popularized the ?let the chips fall where they may? approach to economic policy. ?Kick the props out from under this market and all of a sudden Dow 3,000 is on the table, as argued by Global strategist and demographics maven, Harry Dent.

They might even go as far as unwinding the Fed?s hefty $2.7 trillion balance sheet. ?That would give the Chinese, who hold $1 trillion of these bonds, a heart attack. ?But who cares? It would create the mother of all trading windfalls for me. ?Hell, they might not even care if I torture small animals, beat children with a switch, and leave little old ladies in the middle of onrushing traffic. ?I think we would get along just great.

The Great Kanto Earthquake of 1923