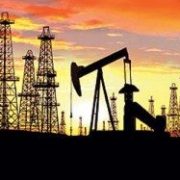 You?ve got to love ExxonMobil (XOM), which constantly trades places with Apple (AAPL) for being the world?s largest company. This is why petroleum engineers are getting $100,000 straight out of college, while English and political science major are going straight on to food stamps.

I recommend (XOM) and other oil majors as part of any long-term portfolio. The price of oil has gone up in my lifetime from $3 a barrel up to $149, and then back down to $107 today. The reasons for the ascent keep growing, from the entry of China into the global trading system, to the rapid growth of the middle class in emerging nations. They?re just not making the stuff anymore, and we can?t wait around for more dinosaurs to get squashed.

Oil companies aren?t in the oil speculation business. As soon as a new supply comes on stream, they hedge off their risk through the futures markets or through long term supply contracts. You can find the prices they hedge at in the back of any annual report.

Working in the oil patch a decade ago pioneering the ?fracking? process for natural gas, I got to know many people in the industry. I found them to be insular, God fearing people not afraid of hard work. Perhaps this is because the black gold they are pursuing can blow up and kill them at any time. They are also great with numbers, which is why the oil majors are the best managed companies in the world.

They are also huge gamblers. I swallow hard when I see the way these guys through around billions in capital, keeping in mind past disasters, like Dome Petroleum, the Alaskan oil spill, Piper Alpha, and more recently, the ill-fated Macondo well in the Gulf of Mexico. But one failure does not slow them down an iota. The ?wildcatting? origins made this a faith based industry from day one, when praying was the principal determinant of where wells were sunk.

Unfortunately, the oil companies are too good at their job of supply us with a steady and reliable source of energy. They have one of the oldest and most powerful lobbies in Washington, and as a result, the tax code is riddled with favorite treatment of the oil industry. While social security and Medicare are on the chopping block, the industry basks in the glow of $53 billion a year in tax subsidies.

When I first got into the oil business and sat down with a Houston CPA, the tax breaks were so legion that I couldn?t understand why anyone was not in the oil racket. Every wonder why we have had three presidents from Texas over the last 50 years, and are possibly looking at a fourth?

Three words explain it all: the oil depletion allowance, whereby investors can write off the entire cost of a new well in the first year, while the income is spread over the life of the well. This also explains why deep water exploration in the Gulf is far less regulated than California hair dressers.

Knowing the Price of Everything and the Value of Nothing