Sorry, the Trade Alert to sell short Macys’ (M) went out late yesterday. I was speaking to a retail expert and his list of things wrong with the marquee name was so long that I couldn’t get off the phone. New Yorkers are going to have to find something else to do on Thanksgiving Day than attend their famous parade.

His bottom line? Retail is in a death spiral from which it will never recover. Trying on clothes in a shopping mall will soon become a thing of the past, going the way of the buggy whip, black and white TV, and six-track tapes.

If you had to pick the biggest loser of our ongoing trade wars, which have just been ratcheted up in intensity, it would be the retail industry (XRT). Higher costs and tariffs can’t be passed on, minimum wages are rising in the big cities, lower selling prices are lower, and a massive inventory glut is NOT what money-making is all about.

The stocks have delivered as expected, providing one of the worst-performing sectors of 2019. Half of them probably won’t even make it until 2020.

In fact, Sears (S) and Macy’s (M) have announced more store closings nationwide. The overhead is killing them in a micro margin world.

So, I stopped at a Walmart (WMT) the other day on my way to Napa Valley to find out why.

I am not normally a customer of this establishment. But I was on my way to a meeting where a dozen red long-stem roses would prove useful. I happened to know you could get these for $10 a dozen at Walmart.

The clothing offered was out of style and made of cheap material. It might as well have been the Chinese embassy. Most concerning, there was almost no one there, customers OR employees.

The Macy’s downsizing is only the latest evidence of a major change in the global economy that has been evolving over the last two decades.

However, it now appears we have reached both a tipping point and a point of no return. The future is happening faster than anyone thought possible. Call it the Death of Retail.

I remember the first purchases I made at Amazon 20 years ago. Even though I personally knew the founder, Jeff Bezos, from my Morgan Stanley days, the idea sounded so dubious that I made my initial purchases with a credit card with only a low $1,000 limit. That way, if the wheels fell off, my losses would be limited.

And how stupid was that name Amazon, anyway? At least, he didn’t call it “Yahoo” because it was already taken.

Today, I do almost all of my shopping at Amazon (AMZN). It saves me immense amounts of time while expanding my choices exponentially. And I don’t have to fight traffic, engage in the parking space wars, or wait in line to pay.

A used 42-inch Sub Zero refrigerator with a front-door icemaker and water dispenser? Have it there in two days, with free shipping at one fifth the $17,000 full retail price.

So I was not surprised when I learned this morning that Amazon accounted for 25% of all new online sales in 2018 in a market that is already growing at a breathtaking 20% YOY.

In 2000, after the great “Y2K” disaster that failed to show, I met with Bill Gates Sr. to discuss his foundation’s investments.

It turned out that they had liquidated their entire equity portfolio and placed all their money into bonds, a brilliant move coming mere months before the Dotcom bust and a 16-year bull market in fixed income.

Mr. Gates (another Eagle Scout) mentioned something fascinating to me. He said that unlike most other foundations their size, they hadn’t invested a dollar in commercial real estate.

It was his view that the US economy would move entirely online, everyone would work from home, emptying out city centers and rendering commuting unnecessary. Shopping malls would become low-rent climbing walls and paintball game centers.

Mr. Gates’ prediction may finally be occurring. Some counties in the San Francisco Bay area now see 25% of their workers telecommuting.

It is becoming common for staff to work Tuesday-Thursday at the office, and from home on Monday and Friday. Productivity increases. People are bending their jobs to fit their lifestyles. And oh yes, happy people work for less money in exchange for personal freedom, boosting profits.

The Mad Hedge Fund Trader itself may be a model for the future. We are entirely a virtual company with no office. Everyone works at home in four countries around the world. Oh, and we all use Amazon to do our shopping.

The downside to this is that whenever there is a snowstorm anywhere in the country, it affects our output. Two storms are a disaster, and at three, such as last winter, we grind to a virtual halt.

You may have noticed that I can work from anywhere and anytime (although sending a Trade Alert from the back of a camel in the Sahara Desert was a stretch), so was sending out an Alert while hanging on the cliff face of a Swiss Alp, but they both made money.

Moroccan cell coverage is better than ours, but the dromedary’s swaying movement made it hard to hit the keys.

The cost of global distribution is essentially zero. Profits go into a bonus pool shared by all. Oh, and we’re hiring, especially in marketing.

It is happening because the entire “bricks and mortar” industry is getting left behind by the march of history.

Sure, they have been pouring millions into online commerce and jazzed up websites. But they all seem to be poor imitations of Amazon with higher prices. It is all “Hour late and dollar short” stuff.

In the meantime, Amazon soared by 49% from December to the May high, and was one of the top performing stocks of 2018. There are now a cluster of Amazon analyst forecasts around the $3,000 mark.

There’s a good reason why you haven’t heard much from me about retailers. I made the decision 30 years ago never to touch the troubled sector.

I did this when I realized that management never knew beforehand which of their products would succeed, and which would bomb, and therefore were constantly clueless about future earnings.

The business for them was an endless roll of the dice. That is a proposition in which I was unwilling to invest. There were always better trades.

I confess that I had to look up the ticker symbols for this story as I never use them.

You will no doubt be enticed to buy retail stocks as the deal of the century by the talking heads on TV, Internet research, and maybe even your own brokers, citing how “cheap” they are.

It will be much like buying the coal industry (KOL) a few years ago, another industry headed for the dustbin of history. That was when “cheap” was on its way to zero for almost every company. 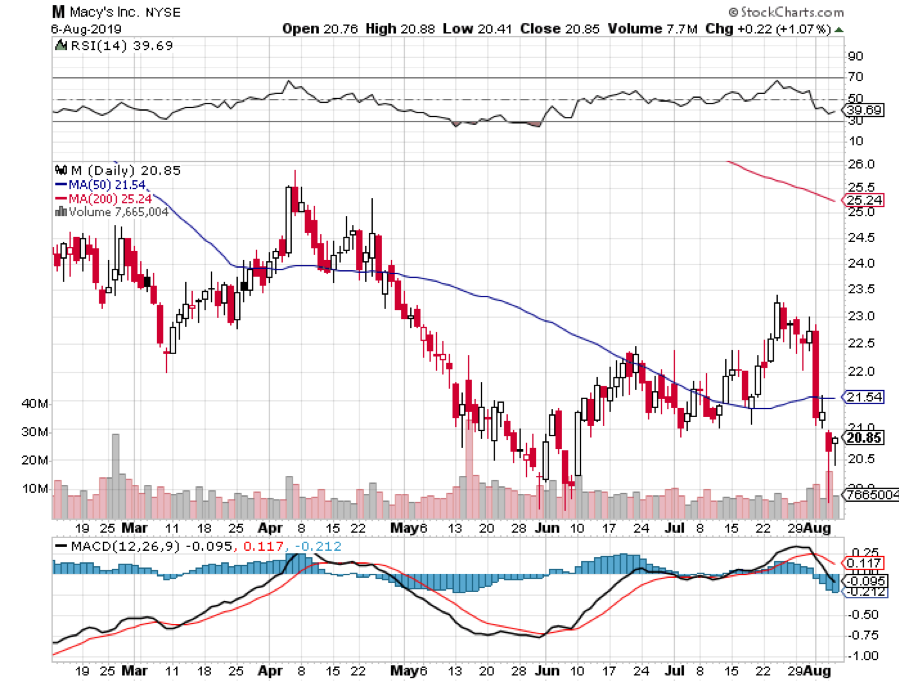 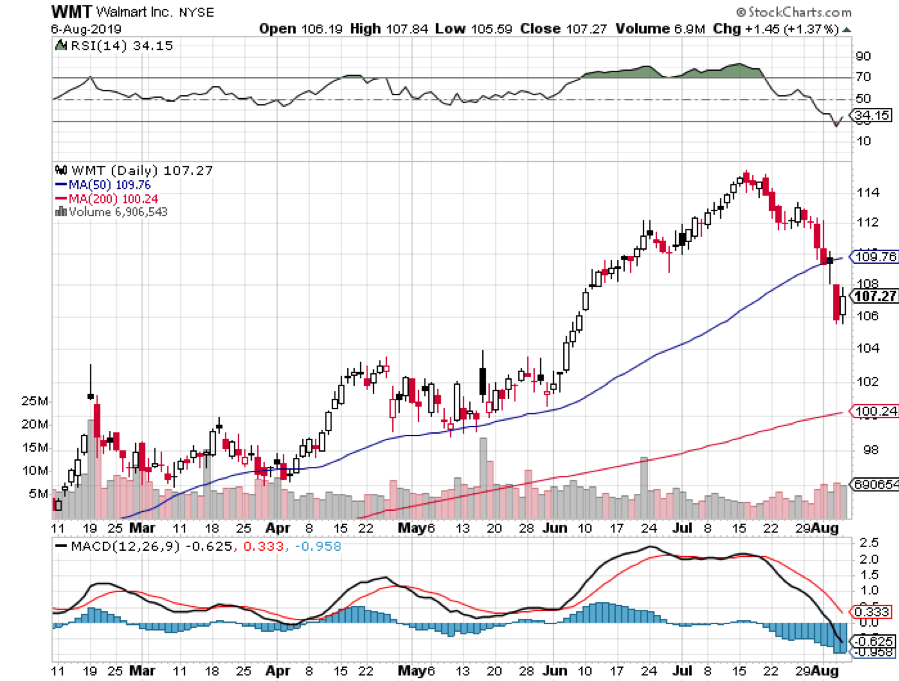 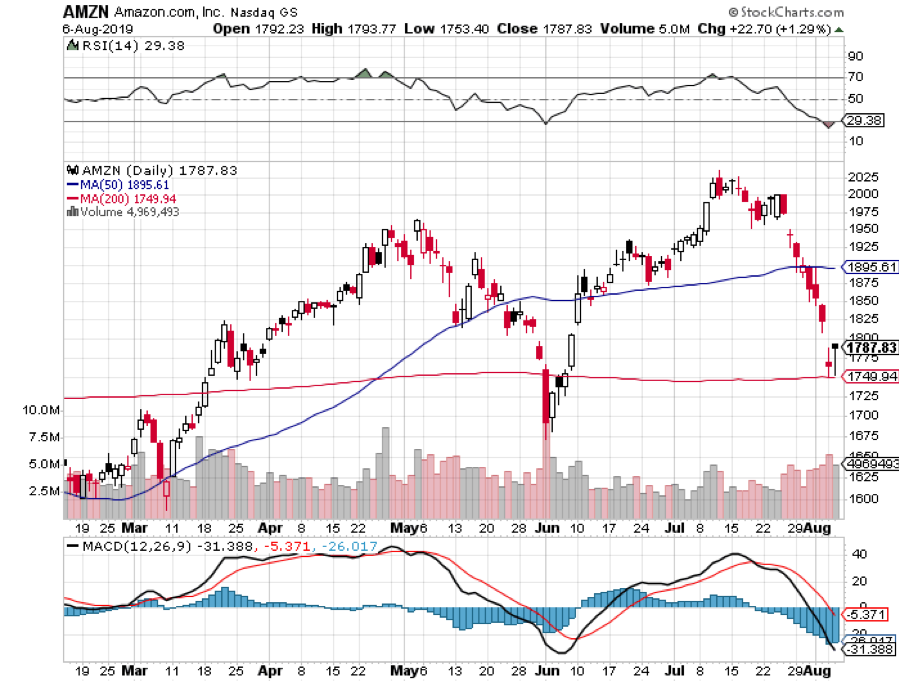 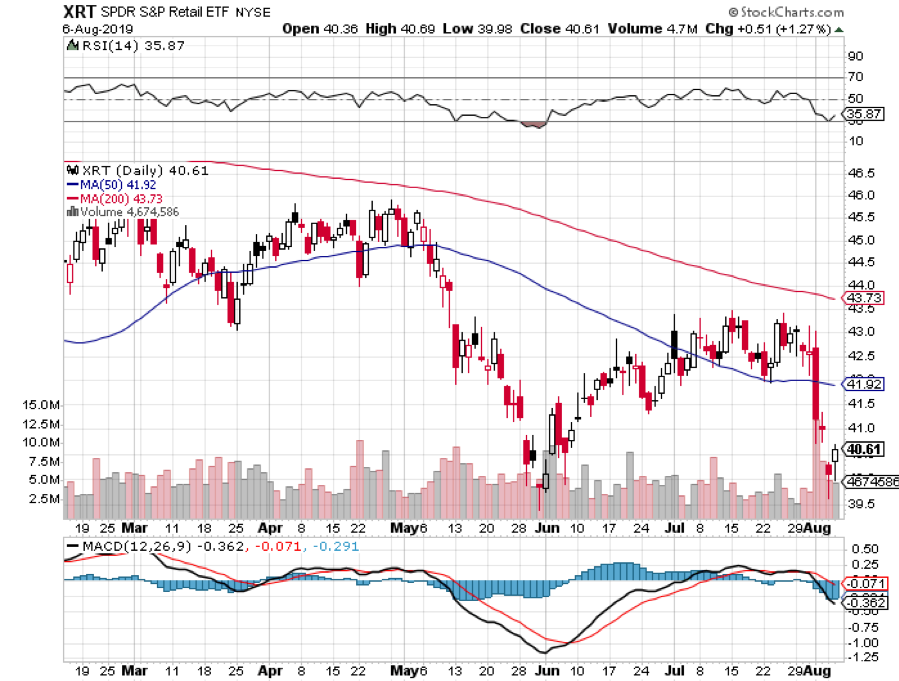