Featured Trade:
(A DAY WITH TOM FRIEDMAN OF THE NEW YORK TIMES)
(THE BEST FINANCIAL BOOK EVER),
(THE NEW COLD WAR)

While the Diary of a Mad Hedge Fund Trader focuses on investment over a one week to six-month time frame, Mad Day Trader, provided by Jim Parker, will exploit money-making opportunities over a brief ten minute to three day window. It is ideally suited for day traders, but can also be used by long-term investors to improve market timing for entry and exit points. END_OF_DOCUMENT_TOKEN_TO_BE_REPLACED

As a potentially profitable opportunity presents itself, John will send you an alert with specific trade information as to what should be bought, when to buy it, and at what price. This is your chance to ?look over? John Thomas? shoulder as he gives you unparalleled insight on major world financial trends BEFORE they happen. END_OF_DOCUMENT_TOKEN_TO_BE_REPLACED

While the Diary of a Mad Hedge Fund Trader focuses on investment over a one week to six-month time frame, Mad Day Trader, provided by Jim Parker, will exploit money-making opportunities over a brief ten minute to three day window. It is ideally suited for day traders, but can also be used by long-term investors to improve market timing for entry and exit points. END_OF_DOCUMENT_TOKEN_TO_BE_REPLACED 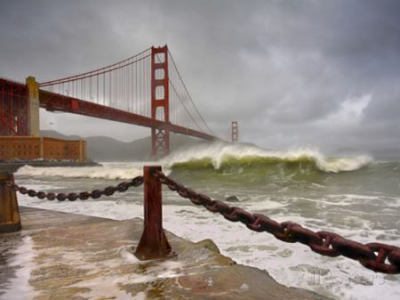 As I write to you, torrential sheets of rain are pounding the windows of my home. The wind is shaking the building down to the foundation. I?m typing as fast as I can, and praying that the power can stay on long enough for me to finish this piece.

And, oh yes, people are cheering.

The ?Pineapple Express? that barreled in on we San Franciscans from Hawaii is expected to dump 5-8? of rain, with some neighborhoods getting a drenching 13 inches. Much of the city?s downtown is without power, and the BART station is closed.

It was probably the most widely forecast storm in California history. Almost every Bay Area school system closed. The California Highway Patrol warned drivers to avoid non-essential driving. Many took the hint and enjoyed a day off.

What was really interesting was the 77-year-old Golden Gate Bridge?s 70 mph design limitation. That?s the speed that local gusts reached. To be safe, the Bridge Authority limited traffic to a single lane each way, and banned trucks outright. As of this writing, it is still standing.

The storm at Lake Tahoe was even more amazing. Winds near Donner Pass were clocked at 135 mph. Some four feet of snow fell at the upper altitudes. The Trans Sierra Interstate 80 has been closed for hours. The onslaught rescued the Christmas ski season just in the nick of time.

It looks like I?ll be taking my snowshoes out of storage early this year.

After suffering through a five yearlong drought, it is now expected to rain nonstop for three weeks.

The drought inflicted a serious economic impact on the state. The prices for our major crops (DBA), grapes, almonds, hay, cotton, oranges, walnuts, rice, apples, and lemons have been soaring. Even our largest cash crop, marijuana (an estimated $5 billion per annum), was affected.

Farmers resorted to drilling deep wells of 1,000 feet or more to tap ancient aquifers. That has led to widespread subsidence. Some areas are now ten feet lower than they were 100 years ago.

The drought all added fuel to the political fires. Many of the battles here have long revolved around water, with profligate Los Angeles (huge lawns, golf courses, and too many people) perennially attempting to steal H2O from the wetter north, via long, expensive canals that we all have to pay for. Now that everyone is soaked, perhaps tempers will ease.

Thank you for the many emails expressing concern for my safety. Even I was not willing to undertake my nightly four-hour mountain backpack in this pestilential weather. However, I will be shopping for a new set of patio furniture, once the January sales hit.

Is anyone knowledgeable about Costco?s offerings on this front? 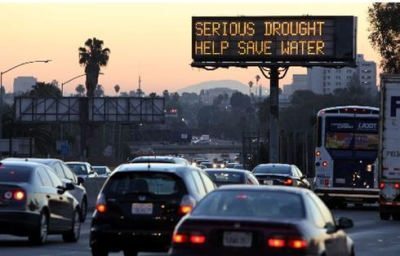 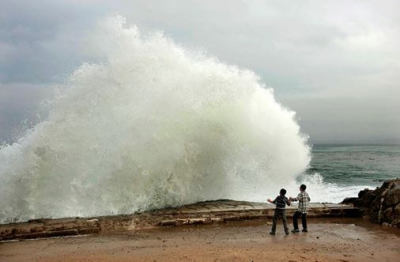 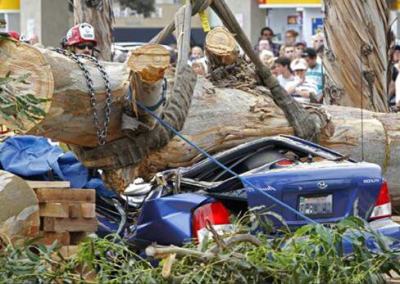 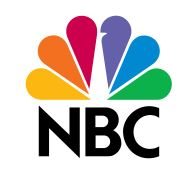 ?You have to be very careful giving up analogue dollars for digital pennies,? said Jeff Zuker, CEO of NBC.

While the Diary of a Mad Hedge Fund Trader focuses on investment over a one week to six-month time frame, Mad Day Trader, provided by Jim Parker, will exploit money-making opportunities over a brief ten minute to three day window. It is ideally suited for day traders, but can also be used by long-term investors to improve market timing for entry and exit points. END_OF_DOCUMENT_TOKEN_TO_BE_REPLACED

The continuing collapse in oil prices has finally spilled over into the real world, at its worst knocking 290 points off of the Dow Average yesterday.

Traders who grew accustomed to a market that went up like clockwork every day were in for a rude awakening. Is the positive case for equities coming to an end?

Is the bull dead?

Not yet. All we are seeing is a normal 5%-7% correction in a long-term uptrend. It?s really all about the numbers, as it always is.

American companies are still on tract to increase earnings by 10% in 2015, and S&P 500 earnings are set to reach $130. Technology and innovation are hyper accelerating. Our energy costs have been cut in half, creating a giant tax cut. The world still wants to send its money here.

Goldilocks is still alive and well, just momentarily hiding under the bed.

This time, however, it?s different.

Oil has gone down so fast, some $46, or 43% in a scant six months that it has set the cat among the pigeons within the producing countries. The decline has been so precipitous that the budgets of oil producing countries from Saudi Arabia, to Russia, to Norway, have taken a real walloping. What else would you expect when your principal revenue source suddenly halves?

To raise money, they are having to sell off investments, primarily stocks, and especially energy stocks. That is one of the few industries they actually understand.

This all means that the selling should dry up going into yearend, once budgetary requirements are met. If the price of oil stabilizes here at $61, or heaven forbid, starts to rise, then their selling of stocks completely ceases.

After suffering through a Trade Alert drought that has lasted more than a month, there are finally some nice trades setting up. I?m thinking specifically about the S&P 500 (SPY), energy (OXY), (XOM) and Solar stocks (SCTY), (FSLR), (VSLR), and even a chance to get back into the front-runners, technology (XLK) and biotech (BBH). Europe is also finally starting to look enticing. 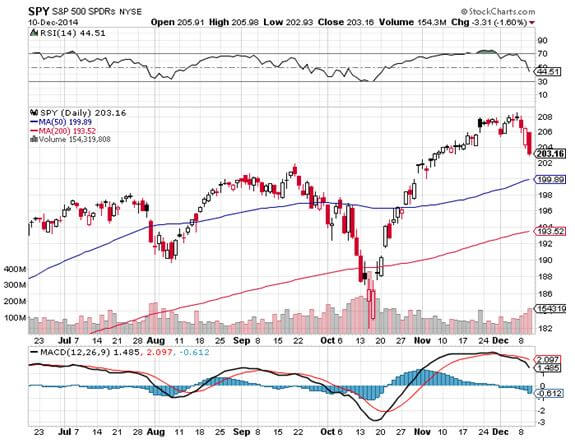 Goldilocks is Still Alive and Well