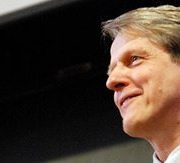 Yale professor, Robert Shiller, is the kind of imp like, peripatetic college professor you might expect to find in a Disney movie. Highly animated and jumping from one radical idea to the next it is hard to keep up with his stream of consciousness torrent of economic innovations. After a two-hour barrage, I was so intellectually exhausted that all I could do when I returned home was to plop down on the sofa with a Jack on the rocks and watch Fox News.

You know Robert Shiller as the creator of the Case Shiller Real Estate Index, which tracks 20 major residential housing markets around the US. His data was originally the domain of a handful of real estate brokers with a theoretical bent or securitizing investment bankers. But when the real estate collapse began to accelerate in 2007, it suddenly became the data point du jour for every property investor, business news network, and hedge fund manager.

Shiller is a devout non believer of the efficient market theory espoused by Eugene Fama of the University of Chicago. He thinks that financial markets are so emotional that they are beyond rational analysis. The systemic vulnerability of financial markets was a major cause of the 2008 crash and is still not well understood. He argues that people should have a 100 year time horizon when making investments, because that?s how long today?s children will live. Does anyone have the trading call for the Spring of 2112? (no typo!).

He says that teaching finance today is about as popular as being the university Reserve Officer Training Corps (ROTC) instructor during the Vietnam War. People are angry at bankers, as the Occupy Wall Street crowd has so amply shown, which Shiller sees as our own ?Arab Spring?. Since 1990, the top 1% of the wealthy have seen their net worth soar by 60%, while it has fallen for the other 99%.

When Occupiers discovered that their movement could cause governments to fall, it rapidly spilled beyond its Madrid, Spain origins. But the financial industry is not all bad. Witness the miracle in emerging markets which has been made possible through new capital provided by western investment bankers.

Robert titillated me with some highly creative innovations which we may see adopted in coming years. I?ll give you the highlights.

*Options on individual real estate markets, now five years old, will go mainstream and finally become liquid as individuals seek to protect their home equity during economic downturns. This will become a major area of new profits for Wall Street.

*?Continuous mortgages? should be created whereby the debt is never paid off, but is assumed from one owner to the next in exchange for a higher interest rate. If you package many of these together and securitize them, it would be a major step towards clearing out the massive inventory of unsold homes.

*The government already issues plenty of bonds and next should sell equity in itself in one trillionth increments. That puts the value of the government?s share price today at about $15.50. If the economy grows, the share price should go up.

*Tax rates for the wealthy should rise with inequality. The more wealth that is concentrated with the 1%, the higher the maximum tax rate should go. Remember, the maximum rate was 90% at the time of the Roosevelt administration during the Great Depression, nearly triple today?s 35% rate.

*The actual impact of high frequency traders, who he refers to as ?millisecond traders?, is vastly exaggerated.

*Although the new ?crowd funding? bill just signed by president Obama has been described as the ?Boiler Room Full Employment Act?, it will provide a valuable source of venture capital for micro startups. Those earning only $40,000 a year are limited to an $800 bet, with the maximum legal investment set at $10,000.

*Some 14% of the total economic activity of the US involves security. Just having people watching people is an enormous waste of resources.

*For profit nonprofits, called benefit corporations, should proliferate to advance specific social goals. These should work well as they pay little in wages and enjoy community support. They are already legal in eight states.

If you would like to attend one of Shiller?s classes for free and expose yourself to more out of the box economic thinking, you can do so through regular offerings of his online courses. To sign up for Open Yale University, which Time magazine lists as one of the top websites, please click here at http://oyc.yale.edu/economics .

And what about real estate? Robert told me that his data show that there is not the slightest sign of any long term recovery in prices. Real estate brokers insisting that the final bottom has been reached are best to be ignored. Rent, don?t buy.

Euro Crash Warns of More to Come
Scroll to top