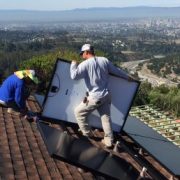 It’s just a question of how long it takes for Moore’s law-type efficiencies to reach exponential growth in the solar industry.

Accounting for 4% of the country’s electrical power supply today, we are only five doublings away from 100% when energy essentially becomes free.

California, alone, has over one million homes with solar installations, changing the grid beyond all recognition. As a result, mid-day peak electricity demand times when the sun is the brightest have become low demand times, while sunsets bring on the new peak demand times.

The next question beyond the immediate trading implications is, “What’s in it for me?”

I should caution you that after listening to more than 20 pitches, almost all of the information you get from fly-by-night solar installation salesmen is inaccurate. Most don’t know the difference when it comes to a watt, an ohm, or a volt.

I think they were mostly psychology or philosophy majors, if they went to college at all.

The promised 25-year guarantees are only as good as long as the installing firms stay in business, which for some will not be long.

Talking to these guys reminded me of the aluminum siding salesmen of yore. It was all high pressure, exaggerated benefits, and relentless emailing.

I come to this issue with some qualifications of my own, as I have been designing and building my own solar systems for the past 50 years.

During the early 1960s, when solar cells first became available to the public through Radio Shack (RIP), I used to create from scratch my own simple sun-powered devices. But when I measured the output, I would cry, finding barely enough power to illuminate a tiny flashlight bulb.

We have come a long way since then. For years I watched my organic beansprout-eating, Birkenstock-wearing neighbors install expensive, inefficient solar arrays because it was good for the environment, politically correct, and saved the whales.

However, when I worked out the breakeven point compared to conventional power sources, it stretched out into decades.

It wasn’t until 2015 when solar price/performance hit the breakeven sweet spot acceptable for me, about six years. Five years in, and I already earned my original investment back.

You see, a funny thing happened on the way to the future. First, our local power utility, PG&E (PGE) went bankrupt. That paved the way for several back-to-back 7.5% rate increases to bail the company out, making solar much cheaper by comparison.

Don’t get complacent because you don’t live in the Golden State and have not been subject to PGE’s travails. The public utility business model is 120 years old everywhere and is about to disappear nationally.

You may have noticed that it has been very hot for the last several years. Thanks to global warming, my solar system is becoming much more efficient, not less as I expected. The length of the days is the same, but they seem to operate more efficiently at high temperatures.

The numbers are now so compelling, that even a number-crunching, blue state-hating Texas oilman should be installing silicon on his roof.

As for me, I have just tripled up my own system, moving from 19 SunPower (SPWR) panels to 59. That will take my total output from 8 watts to 23watts. My total electricity output is 54,000 kWh a day worth $1,000 a month. After charging my energy-hungry Tesla Model X, I am left with $400 a month worth of excess power, which I sell back to (PGE). The checks arrive once a year.

For the icing on the cake this time, I installed three of the newest 15,000 kWh Tesla Powerwall’s, which store enough electricity to run my home indefinitely, since they are recharged daily by the sun.

With (PGE) averaging six days a year in rolling power blackouts a year, that is a handy thing to have. That gives me true grid independence AND net earnings of $3,000 a year.

If you need a push from behind, consider this. If you go to contract, by the end of the year the US government will pay for 26% of your entire system through a federal “alternative energy” tax credit. That incentive will almost certainly go up next year. Some states, like California, pile additional subsidies on top of this. And Mosaic will finance 100% of your project with a bargain basement 2.99% loan.

Here are my conclusions upfront: Learn about “tier shaving” from your local utility, and buy, don’t lease. All electrical utility plans are local.

First, about the former.

Every utility has a tiered system of charging customers on a prorated basis. A minimal amount of power for a low-income family of four living in a home with less than 1,500 square feet, about 20% of the U.S. population, costs about 10 cents a kilowatt-hour.

This is a function of the high level of public power utility regulation in the U.S., where companies are granted local monopolies. There are a lot of trade-offs, local politics, and quid pro quos that are involved in setting electric power rates.

For example, PG&E (PGE) has five graduated billing tiers, with the top rate at 55 cents a kWh for mansion dwelling energy hogs like me (one Tesla in the garage and another on the way).

In order to minimize your up-front capital cost, you want to buy all the power you can at the poor person rate, and then eliminate the top four tiers entirely. Do this, and you can cut the cost of your new solar system by half.

Your solar provider will ask for your recent power bills and will help you design a system of the right size.

Warning! They will try to sell you more than you need. After all, they are in the solar panel selling business, not the customer-value-for-money delivery business.

Don’t focus too much on the panels themselves, as they are only 25% of a system’s costs. The big installers constantly play a myriad of panel manufacturers off against each other to get the cheapest bulk supplies.

I picked SunPower because they have the most advanced technology, best solar conversion rate, and are American-made. That’s me, Mr. first class all the way!

The majority of the expense is for labor and local permitting.

PG&E has to pay me only its lowest marginal cost of power, or 4 cents/kWh. That is why it pays to under build your system, which for me cost $2.49/kWh to install, net of the tax credit.

This was the quid pro quo that enabled PG&E to agree to the whole plan in the first place. So, you won’t get rich off your solar system.

However, I am now protected against any price increase for electricity for the next 25 years!

Now for the lease or buy question. If you don’t have $100,000 for a cutting-edge, state-of-the-art solar installation, (or $16,000 for a normal size house with no Teslas), or you want to preserve your capital for your trading account, you may want to lease from a company.

The company will design and install an entire system for you for no money down and lease it to you for 20 years. But after your monthly lease payment, it will end up keeping half the benefit, and raise your cost of electricity annually. However, this is still cheaper than continuing to buy conventional power.

So if you can possibly afford it, buy, don’t rent.

This being Silicon Valley, niche custom financing firms have emerged to let you have your cake and eat it, too.

Dividend Solar (click here for their site) will lend you the money to buy your entire system yourself, thus qualifying you for the investment tax credit.

As long as you use the tax credit to repay 30% of your loan principal within 15 months, the interest rate stays at 6.49% for the 20-year life of the loan. Otherwise, the interest rate then rises to a credit card like 9.99%. A FICO score of only 690 gets you in the door.

There are a few provisos to add.

You can’t install solar panels on clay or mission tile roofs popular in the U.S. Southwest (where the sun is), or tar and gravel roofs, as the breakage or fire risk is too great. The racks that hold the panels down in hurricane-force winds simply won’t fit.

If you want to maintain your aesthetics, you can take the mission tiles off, install a simple composite shingle roof, bolt your solar panels on top, then put back the clay tiles around the edges. That way it still looks like you have a mission tile roof.

Also, it is best to install your system in the run-up to the summer solstice, when the days are longest and the sunshine brightest. Solar systems produce 400% more power on the longest day of the year compared to the shortest, because of the lower angle of the sun’s rays hitting the Northern Hemisphere.

Yes, a total American solar energy supply in 25 years sounds outrageous, insane, and even ludicrous (to use some of Elon Musk’s favorite words).

But, so did the idea of a 3-gigahertz laptop microprocessor for a mere $1,000 50 years ago, when Moore’s law first applied.

The graphics for my own upgraded solar power supply bill are below: 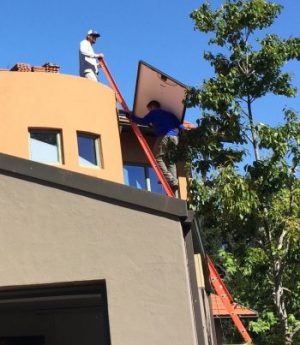 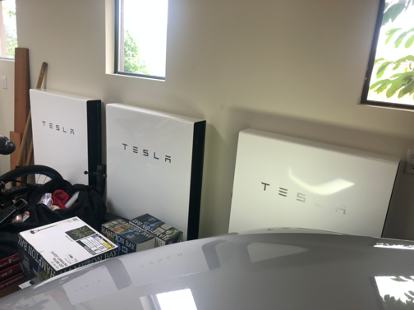 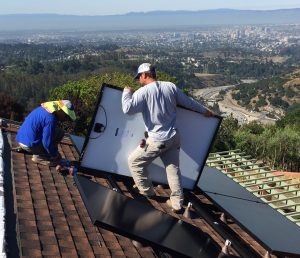 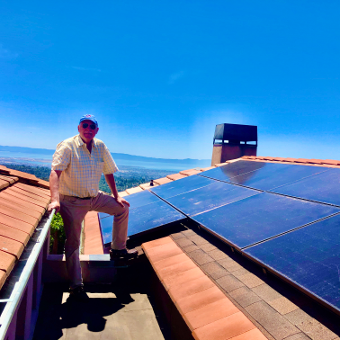 A Tale of Plunging Power Bills

The Trade of the Century is Setting Up
Scroll to top