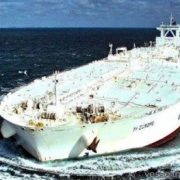 With the recent collapse in oil prices, down a whopping $20 in just four months, I am starting to get a lot of emails from followers looking for Trade Alerts to buy the energy companies.

After all, energy is one of my three core industries in which to invest over the next two decades. Why not now?

The short answer is: Not yet. Don?t ever confuse a stock that has gone down a lot with ?cheap.?

The share prices for this sector are getting so low, they are starting to redefine the meaning of ?bargain.? The major integrated oil companies are now trading under book value with single digit multiples.

They are now at liquidation values, assuming that the fall in the price of Texas tea halts at $80. Those are valuations almost as low as Apple (AAPL) saw a year ago.

The absence of my Trade Alerts in this fertile field is happing because things could get worse for oil before they get better. There is now a war for market share occurring between the world?s second and third largest producers, Saudi Arabia and Russia (the US is now number 1).

Both countries desperately depend of rising prices and export volumes to maintain domestic political stability. When that doesn?t happen, budget deficits explode, spending gets cut, revolutions occur, and governments fall.

And these aren?t countries that send former leaders to country clubs to practice their golf swings in retirement. Firing squads are more the order of the day. In fact, countries maintaining high oil revenues is a matter of personal survival for their leaders.

Until recently, I would have said that China would step in and put a floor under the market to fuel their insatiable demand for energy. But they have run out of storage, and are unable to take more.

There is just no place to put it. They have even resorted to long-term charters of ultra large tankers, like the 434,000 tonne TI Europe, purely to build reserves.

The shake out is especially bad in the offshore sector, the planet?s most expensive source of crude. A glut of new drilling rigs is about to hit the market, ordered during more prosperous times years ago, while existing ones can be snapped up for 60 cents on the dollar.

Oil suffers from the additional damnation in that it is being dragged down by the global commodity collapse. Unless an asset class is made out of paper and pays an interest rate or a dividend, it is getting dissed to an unbelievable degree.

All of this means that the price of oil could fall further before we hit bottom and bounce. Now that $90 has been decisively broken, $80 is in the cards, and possibly $70 on a spike.

If you had told me when I was fracking for natural gas in the Barnett Shale 15 years ago that this process would ultimately cause the collapse of Russia and Saudi Arabia, me and my roustabout buddies would have said you were nuts. Yet, that is precisely what seems to be happening.

If there is one thing saving Texas tea, it is that the US can?t build energy infrastructure fast enough to get burgeoning new supplies to market. After the Keystone Pipeline got stalled by regulatory roadblocks, giant 100 car oil trains sprang out of nowhere overnight.

So many railcars have been diverted to the oil trade that farmers are now having trouble getting a record grain crop to market. This is why railroads have been booming (click here for ?Railroads Are Breaking Out All Over?).

The energy research house, Raymond James, recently put out an estimate that domestic American oil production (USO) would rise to 9.1 million barrels a day by 2015. That means its share of total consumption will leap to 46% of our total 20 million barrels a day habit. These are game changing numbers.

Names like the Eagle Ford Shale, Haynesville, and the Bakken Shale, once obscure references on geological maps, are now a major force in the country?s energy picture.

The value of this extra 3.5 million barrels/day works out to $115 billion a year at current prices (3.5 million X 365 X $90). That will drop America?s trade deficit by nearly 25% over the next three years, and almost wipe out our current account deficit.

Needless to say, this is a hugely dollar positive development, and my own Trade Alerts have profitably been reflecting that.

This 3.5 million barrels will also offset much of the growth in China?s oil demand for the next three years. Fewer oil exports to the US also vastly expand the standby production capacity of Saudi Arabia.

If you want proof of the impact this will have on the economy, look no further than the coal (KOL), which has been falling in a rising market. Power plant conversion from coal to natural gas (UNG) is accelerating at a dramatic pace. That leaves China as the remaining buyer, and their economy is slowing.

It all makes the current price of oil at $90 look a little rich. As with the last oil spike four years ago, this one is occurring in the face of a supply glut. Cushing, Oklahoma is awash in Texas tea, and the Strategic Petroleum Reserve stashed away in salt domes in Texas and Louisiana is at its maximum capacity of 727 million barrels.

It was concerns about war with Syria, Iran, ISIL, and the Ukraine that took prices to $107 in the spring. My oil industry friends tell me this fear premium added $30-$40 to the price of crude. That premium is now disappearing.

It seems that every time a new group grabs an oil field in the Middle East, they ramp up production, rather than destroy it, so they can milk it for the cash. This is why 15 tankers are afloat around the world carrying Kurdish crude to sell on the black market.

Once Europe and Asia return to a solid growth track, oil will recover to $100 a barrel or more. Until then, discretion is the better part of valor, and I?ll be sitting on those Trade Alerts.

It is also why I am keeping oil companies with major onshore domestic assets, like Exxon Mobil (XOM) and Occidental Petroleum (OXY), in my long term model portfolio. 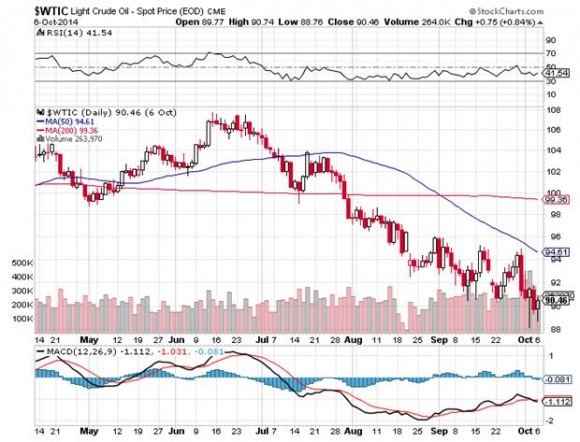 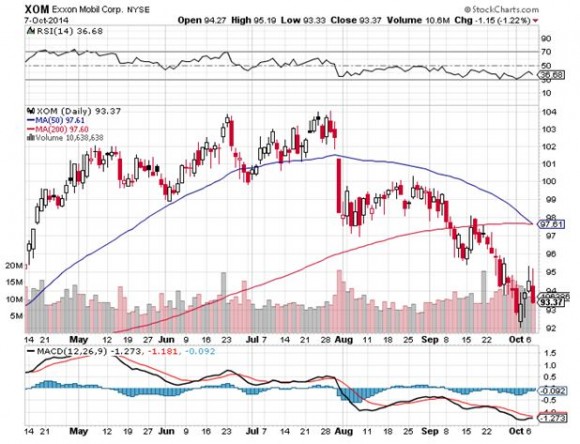 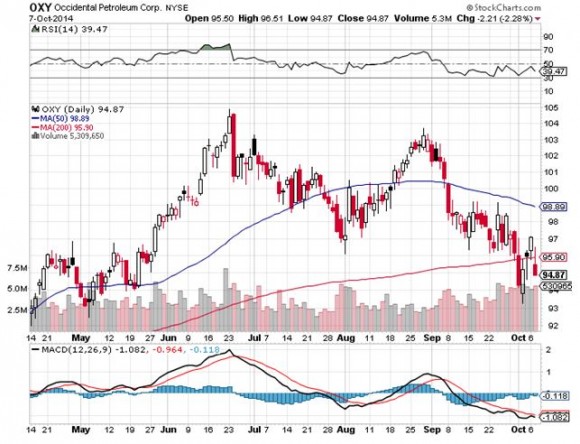 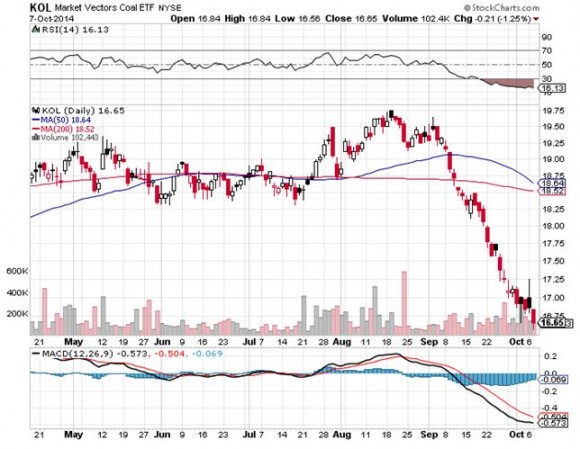 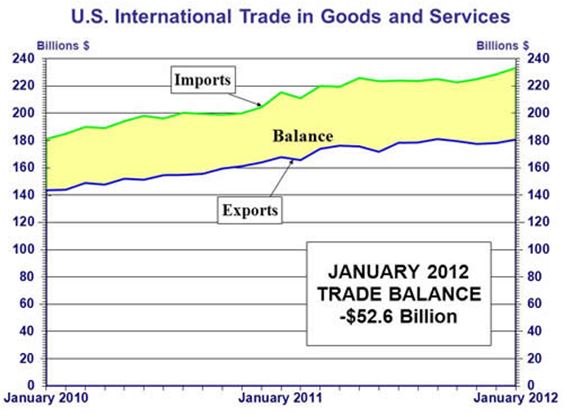 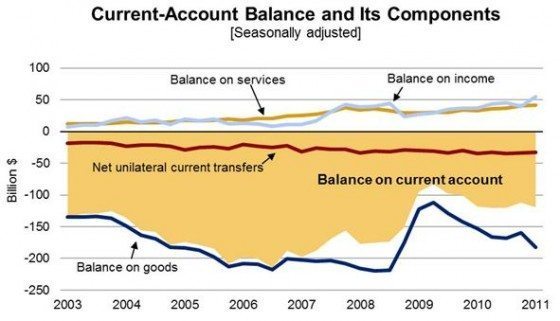 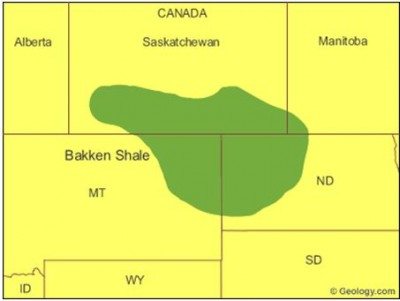 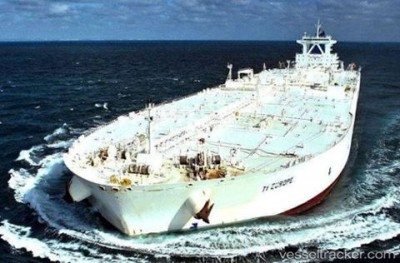