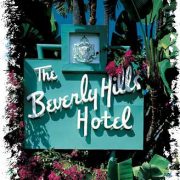 I am writing this letter at a table in the alcove of the Polo Lounge at the legendary Beverly Hills Hotel. They did not disappoint on the movie star front, with more than an ample supply. At the table on my right, John Hamm, who plays the predatory ad man Don Draper in AMC?s Mad Men, is having a friendly chat with Lorne Michaels, the producer of Saturday Night Live. Jamie Lee Curtis is on my left, apparently lecturing a young family member about some indiscretion. A Desperate Housewife of Beverly Hills is across the room signing autographs. Who says that I don?t like to name drop? Hedda Hopper, eat your heart out.

To get here, I had to negotiate the notorious Los Angeles freeway system, where traffic frequently backs up because of drivers found dead the wheel, the victims of daily road rage incidents. You never use your turn signal here. It only encourages people to speed up to take your space. But cut anyone off, and you risk your life.

The freeways here are more a state of mind that a transportation system, and it brings out the full range of human emotion. ?Drive the Pasadena Freeway and you are experiencing the full force of an action video game set in the 1930’s. Make the turn from the 101 to the 110 and you are plunged into a hopeless maze where only the most aggressive rat escapes alive. But turn off from the 10 over the magnificent elliptical overpass to the 405 and you are soaring with the eagles.

The global strategy seminar at Nicks Martini Lounge broke all records for attendance, with many last minute sign ups insuring a packed room. There was much discussion about the longer term outlook for the financial markets, which I viewed with caution for the rest of the year. A recession in Europe and substantial slowdowns in China and India appear to be more than our own feeble and structurally impaired economy can cope with. Whereas last year?s ?sell in May? worked out great, this year January might be a better idea.

The banks will become the major victims of the next melt down, as they have yet to amortize the losses of the last crash, and house prices are still falling. The only distinction is that there will be no TARP, no bail outs, and no stimulus package. A gridlocked congress offers no safety net. Then, the chips really will fall where they may. Residential real estate may fall another 25% and then bump along the bottom for another decade.

This is enough to cause the stock market to plunge 30% from current levels. But it won?t crash to the 2009 low of 666 in the S&P 500 or lower. That means you want to use the next sell off to load the boat once again. For me, a 2% GDP growth rate assures that we will remain trapped in a narrow range for many more years, which you should play for fun and profit.

It looks like Obama can win another election, especially if the large numbers of minorities and young people return to the polls after going missing in action in 2010. Campaigning for his own job will make a huge difference. He should have a win in Libya in his back pocket, and his successful hit against Osama bin Laden has certainly reinforced his anti-terrorism credentials. At the moment, the republican candidates are doing everything they can to assure that the others are unelectable, and Obama is literally singing from the sidelines. However, a democratic win could be offset by the republicans taking both houses of congress, assuring another four years of gridlock and histrionics.

The spanner in the works will be unemployment. With every level of government cutting staff to staunch deficits, and with large companies keeping a death grip on their cash hoards, I don’t expect any improvement here. The structural headwinds are so severe, that I doubt we can make it to the 7% handle for the jobless rate. The 25 million jobs we shipped to China are never coming back. Booming companies are doing well because they don?t hire anyone, offshoring new work or replacing workers with technology instead. There is nothing Obama or anyone else can do about this, no matter what they say.

I am planning a rather ambitious lunch schedule for the rest of the year, which you can find on my website. I look forward to seeing the rest of you then. In the meantime, I see that Victoria Secret model, Giselle B?ndchen, who has recently become available, has just appeared at the door. I?ll see you later. Let?s see if she needs some investment advice.