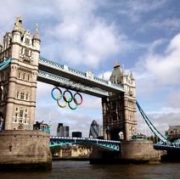 I am writing this report on the Eurostar Express train 300 feet under the English Channel, which is speeding its way from London to Paris at 200 miles per hour.

Waking up in my suite on the Queen Mary 2 at the port of Southampton the other day, the first thing I noticed was that dreadful postwar English architecture. The Germans tried to bomb this place flat to block the shipment of American supplies during WWII, and in the rush to rebuild, style and taste were left by the wayside.

Walking out on my private deck I was greeted with an entirely different view. The pier next to us was parked bumper to bumper with US exports of Caterpillar (CAT) heavy bulldozers and John Deer (DE) tractors, the products of two of my favorite companies. God bless America! Who says we?re in decline?

I saw something else too, Austin Minis, thousands and thousands of them in every conceivable color and design. They crowded the docks, packed every parking structure and lot, and railcars brought in hundreds more by the hour. Roll-on-roll-off ships were loading 3,000 each for shipment to the US.

Who owns Austin Motors these days? Who else but the Germans? In a mere 60 years they have flipped from blocking imports to expediting exports from this southern English transportation hub. History may not repeat itself, but it certainly does rhyme.

To say that much of London is dreading the coming Olympic Games is a vast understatement. Much of the central part of the city has been closed to the public, with parks dedicated to events, and roads closed off to games participants only. Accommodation is so short that an entrepreneurial few have rented out their back yards for visitors to pitch tents.

There are rampant fears that Internet speeds will slow to the point of unusability, putting major multinationals out of business.? The cell phone network is supposed to crash from the backbreaking traffic load. The forecast is for rain on the opening ceremonies. Oh, and a giant asteroid will destroy the earth, at least according to an overwhelmingly downbeat media.

The security is overwhelming. Marine helicopters circle the city with crack snipers on board, the RAF is using fighters to fly combat air patrols, and the army has mounted ground to air missiles of rooftops. I hope they don?t shoot down their own planes. I asked some government officials if I could get an early peak at the Olympic Park and was given a rare flat out ?no?.

Some 4,000 tons of sand sit in front of Buckingham Palace awaiting construction of the courts for the women?s beach volleyball competition. England is suffering the wettest summer in history, and if it doesn?t warm up, the contestants, horror upon horrors, may have to wear clothes! As a result, the black market price for these tickets has fallen below $2,000 each.

More on my report from London tomorrow.

How the Fed Will Trigger the Next Crash
Scroll to top