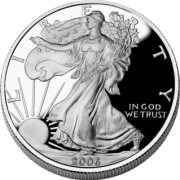 With smoke still rising from the ruins of the recent silver crash, I thought I?d touch base with a wizened and grizzled old veteran who still remembered the last time a bubble popped for the white metal. That would be Mike Robertson, who runs Robertson Wealth Management, one of the largest and most successful registered investment advisors in the country (click here for his site at www.robertsonwealthmanagement.com).

Mike is the last surviving silver broker to the Hunt Brothers, who in 1979-80 were major players in the run up in the ?poor man?s gold? from $11 to a staggering $50 an ounce in a very short time. At the peak, their aggregate position was thought to exceed 100 million ounces.

Nelson Bunker Hunt and William Herbert Hunt were the sons of the legendary HL Hunt, one of the original East Texas wildcatters, and heirs to one of the largest Texas fortunes of the day. Shortly after president Richard Nixon took the US off the gold standard in 1971, the two brothers became deeply concerned about financial viability of the United States government. To protect their assets they began accumulating silver through coins, bars, the silver refiner, Asarco, and even tea sets, and when it opened, silver contracts on the futures markets.

The brother?s interest in silver was well known for years, and prices gradually rose. But when inflation soared into double digits, a giant spotlight was thrown upon them, and the race was on. Mike was then a junior broker at the Houston office of Bache & Co., in which the Hunts held a minority stake, and handled a large part of their business. The turnover in silver contracts exploded. Mike confessed to waking up some mornings, turning on the radio to hear silver limit up, and then not bothering to go to work because knew there would be no trades.

The price of silver ran up so high that it became a political problem. Several officials at the CFTC were rumored to be getting killed on their silver shorts. Eastman Kodak (EK), whose black and white film made them one of the largest silver consumers in the country, was thought to be borrowing silver from the Treasury to stay in business.

The Carter administration took a dim view of the Hunt Brothers? activities, especially considering their funding of the ultra-conservative John Birch Society. The Feds viewed it as an attempt to undermine the US government. The proverbial sushi hit the fan.

The CFTC raised margin rates to 100%. The Hunts were accused of market manipulation and ordered to unwind their position. They were subpoenaed by Congress to testify about their motives. After a decade of litigation, Bunker received a lifetime ban from the commodities markets, a $10 million fine, and was forced into a Chapter 11 bankruptcy.

Mike saw commissions worth $14 million in today?s money go unpaid. In the end he was only left with a Rolex watch, his broker?s license, and a silver Mercedes. He still ardently believes today that the Hunts got a raw deal, and that their only crime was to be right about the long term attractiveness of silver as an inflation hedge.

Nelson made one of the great asset allocation calls of all time and was punished severely for it. There never was any intention to manipulate markets. As far as he knew, the Hunts never paid more than the $20 handle for silver, and that all of the buying that took it up to $50 was nothing more than retail froth.

Through the lens of 20/20 hindsight, Mike views the entire experience as a morality tale, a warning of what happens when you step on the toes of the wrong people.

The Nationalization of the Bond Market
Scroll to top