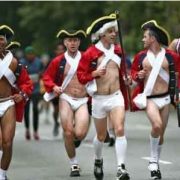 It is all worth it just to run the Bay to Breakers every year, a five mile run from the San Francisco Bay to the Pacific Ocean, which has evolved into the world?s most bizarre sporting event.

The word from race organizers this year was that alcohol was banned, but that nudity was OK. Well, that?s California for you. Of the 15,000 participants, more than a few graciously accepted the tradeoff.

The race started off at the Embarcadero, near the Ferry Building, in unusually cold weather, and goose bumps were in abundance. Once underway, we all warmed up. I moved up early in the crowd, passing a dozen Elvis impersonators, some revolutionary War soldiers in jockey shorts, and a swarm of buzzing honeybees.

I made short work of the many wearing fat suits, body builders in tutus, and at least three dancing harems. Some of the guys were obviously very excited to be there. I thought I actually might get a placing when I was passed by at least ten speeding vaginas running faster than I could possibly catch them. I managed to finish in the top 1,000, just behind Adam and Eve, but well ahead of a group of drunken cavemen.

Then arose the problem of what to do with 15,000 naked people at the beach in 50 degree temperatures. A ?C? note scored a taxi back to my starting point (note to the accounting department: don?t even think about denying this expense!). It was amazing how well behaved the crowd was, given the lack of dress.

The funds raised went to a dozen local charities. I ended up with a free T-shirt and a string of pink party beads. Today, I?m sitting here too sore to get out of my chair, Heartbreak Hill having taken its toll. Still, I can?t wait to run in next year?s race, when I hope for a better time and a more provocative costume. Competing dressed as a Mad Hedge Fund Trader, I didn?t turn too many heads, given the competition.

Here is Your Big New Year Trade
Scroll to top