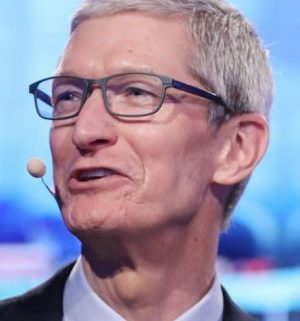 “We think coding should be required in every school because it’s as important as any kind of second language.” – Said CEO of Apple Tim Cook 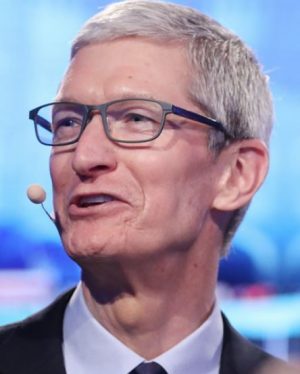 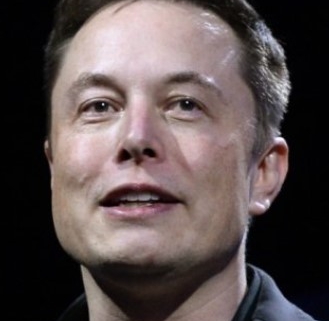 “Some people don’t like change, but you need to embrace change if the alternative is disaster.” – Said Founder and CEO of Tesla Elon Musk 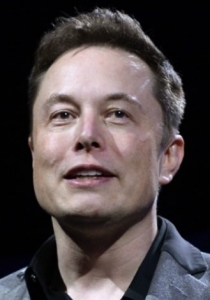 (BUY SALESFORCE ON THE DIP),
(CRM) Taking the current temperature of bellwether stocks is just as important as understanding the secular trends imbuing the tech industry.

Salesforce (CRM) released earnings on Monday and the report was solid but not spectacular.

Shares of Salesforce sold off mildly following the report and could be an indicator of trading lethargy engulfing the hot software group.

At the end of 2018, I urged readers to focus on the cloud-based software stocks and they have performed admirably the first three months of the year.

This trade isn’t finished yet, but it needs a breather and that is what the slight consolidation of Salesforce’s stock is telling us.

The weak guidance issued for the following quarter was more than enough reason to take some profits and accumulate more gunpowder for the next big leg up.

I do not believe tempering forecasts is a material negative for the stock and anyone following this great company can wholeheartedly agree that they have resolutely delivered the top line growth promised by audacious founder and Co-CEO of Salesforce Marc Benioff.

Subduing next quarters forecasts could be a management trick to lower the bar that even mediocre performance can surpass.

I fully expect Salesforce to handily beat next quarters’ estimates.

For the full year of 2018, Salesforce racked up more than $13.2 billion in revenue, making Salesforce the fastest enterprise software company ever to eclipse $13 billion.

The company will need to organically double revenue again in the next 4 years to achieve this feat.

Last quarter experienced a continuation of revenue growth that has made Salesforce one of the leading luminaries of enterprise software industry with revenue in the quarter rising to more than $3.6 billion, up 27% YOY.

They are the 800-pound gorilla in the CRM industry commanding 20% of the overall CRM market according to Edge IDC which adds up to more than the next three competitors combined.

The accolades are impressive for a company that is on the verge of hitting its 20th anniversary and still squarely in uber-growth mode.

The impact of Salesforce is deep, creating a Salesforce economy growing around the firm, and the network effect derived from it is truly breathtaking, one that will deliver at least 3 million additional jobs and more than $850 billion in GDP impact by 2022.

The volume of $20 million and over relationships grew 48% YOY including two 9-figure renewal expansions in the quarter.

Take a look at the finance sector with Barclays as a golden example.

At the World Economic Forum, CEO of Barclays Jes Staley gloated that they had just signed the largest technology agreement in their 300-year history with Salesforce in January.

Salesforce is aiding them in the digital transformation for their 48 million customers, and aim to enhance the digital service offerings to them via the cloud.

I reckon that the volume of $20 million relationships will keep trending higher as Salesforce refine their products for big institutions, as almost every one of them is keen on rapid digital migration that will effectively serve the customer better and put the kibosh on expenses.

Recently raising annual revenue forecasts to around $16.05 billion was inevitable and is not a question of if, but how much earlier than expected can they deliver this overperformance.

It is the first stop on the way to $20 billion in annual sales and if Salesforce can continue to push this narrative of mid-20% top-line growth, shares will climb higher.

The amount of business gravitating towards their CRM interface is demonstrably positive with 96% of media companies from the Fortune 500 Salesforce customers.

The crux of this narrative is that its business model is unrivaled amongst competitors and its strategic position will allow the company to harvest multiyear revenue growth of mid-20% YOY growth as cloud computing is the major recipient of this massive digital transformation.

Salesforce has an enviable position and any weakness in shares is temporary.

The company has forged into a new era of profitability and its scalability allows more and more revenue to drop down to the bottom line.

I believe operating income will accelerate and the company will become even more lucrative with exploding EPS growth just around the corner.

It’s one of the most efficient firms in the world and the 22% spike in new hires will add to the robust growth engine that is known as Salesforce, considering 85% of enterprise customers are in the first innings of full-blown digital transformation. 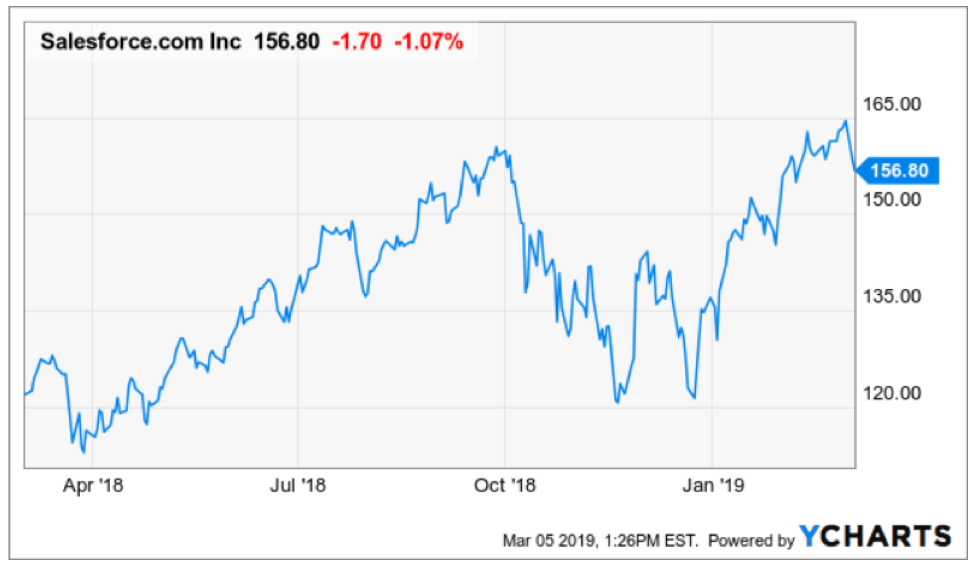 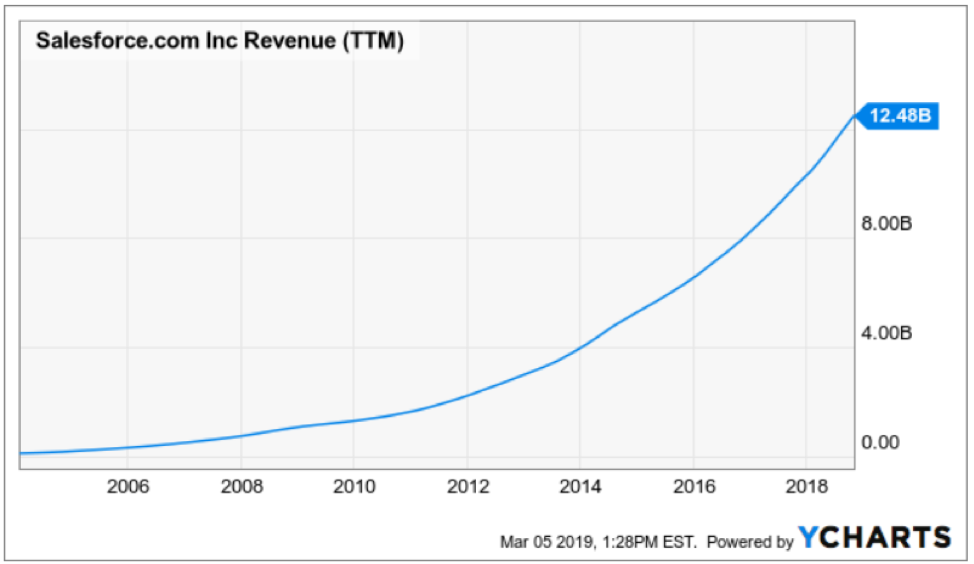 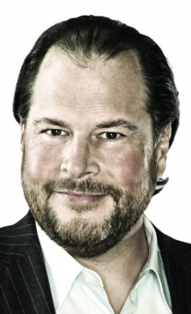 “You must always be able to predict what’s next and then have the flexibility to evolve.” – Said Founder and Co-CEO of Salesforce Marc Benioff 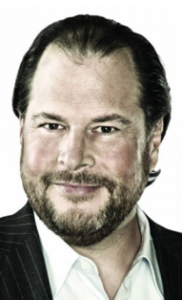 If you want the definition of a legacy tech company, then we have found one of the premier dinosaurs of our time.

The first iteration of Hewlett Packard was in the 1960s when they partnered with Sony to manufacture digital equipment.

They are widely considered the founders of the Silicon Valley establishment that snowballed into what it is today.

In 1939, the Silicon Valley company was established in a one-car garage in Palo Alto by Bill Hewlett and David Packard and initially produced a line of electronic test equipment for Walt Disney.

The garage is classified as a California State historical landmark.

It then developed its products enough to hail itself as the world’s leading PC manufacturer from 2007 to 2013, a 6-year reign at the top.

Its long history doesn’t mean the trajectory has been heightened, the company has presided over some major messes such as its purchase of the ill-fated PDA firm Palm and the once discount PC manufacturer Compaq.

HP has had a great seat being able to observe the massive shifts in the tech scene, but unfortunately, its own business model and revenue stream have not been one of the main recipients of this major shift.

Lenovo supplanted HP bagging market share of 24.6% on the back of a joint venture with Fujitsu in May 2018 that fueled major incremental gains.

The downtrodden numbers signify that demand for HP personal computers is waning and this is just the tip of the iceberg.

The personal computer industry has been growing in the single digits the last few years and is no more the uber growth industry it once was at the outset of the century.

HP blamed the 1% slide on notebook shipments and an 8% decline in desktop shipments.

Evidence tells us that consumers are increasingly valuing mobility more than ever and giving ground to smartphones is inevitable.

Consumers are repeatedly buying computers and phones of the same brand that can easily mesh cohesively, a nod to continuity that consumers love.

Professional work stations have also taken the form of an onslaught of one brand of manufacturer whether it be Android-based Microsoft products of iOS-based Apple.

I can vouch for rarely finding someone with a package of Apple’s iPhone and an HP desktop as a professional work hybrid solution unless they are forced by external circumstances.

Essentially, HP is on the wrong side of the pivot to mobile and the lack of innovation is hurting them in a multi-faceted way.

These companies that fail to evolve have a tendency to act as if market conditions never change, only for one bad earnings report to morph into a string of misses tanking the share price.

I believe HP is on that train to nowhere and its lack of investment into creating more advantageous business opportunities sticks out like a sore thumb right now when you compare them to other tech heavyweights.

CEO of HP Dion Weisler had the quote of the century telling analysts on the call that “we’re now engaging on a new battlefield and it’s called online.”

This quote is a microcosm of the state of HP and reflects poorly on the leadership.

One of HP’s largest cash cows is the printing supplies business and for management to blame “online” forces on crimping sales is an insult to shareholders.

“Online” consumer business has been around for more than 30 years, and to reference this external force as a new engagement dragging down sales condemns this company to pariah-status.

Management must wake up and smell the coffee and understand that if selling overpriced print ink and printers was a god given right then HP is doomed strategically.

An unexpected 3% revenue drop in the printer supplies business was written in the stars, and HP has been lucky to even reap what they have to this point.

It’s an ongoing renaissance for consumer prices in a deflationary environment and finding cheaper alternatives is just an Amazon.com visit away.

The EMEA region (Europe, Middle East and Africa) printing supplies revenue cratered 9% as most of the world rather buy cheaper alternatives online where they can price compare easily.

Manufacturing cartridges with ink inside it is not high-tech and is due for a margin reckoning.

Such a low-tech competitive advantage should be pounced on – we are seeing that in real time and rightly so.

If business and consumers aren’t allowed to use outside ink to place inside of non-HP cartridges, the business will migrate to non-HP, cheaper replacements such as Canon while either filling up ink cartridges themselves or substituting a cheaper alternative.

The dialogue on the conference call was shocking, appearing if HP executives were caught off-guard from this magical thing called the “internet” and the competition derived from it could potentially suppress sales.

I was leaning towards becoming bearish HP before this earnings report and the awful performance vindicated my initial prognosis.

I am bearish HP – sell on any and every rally. 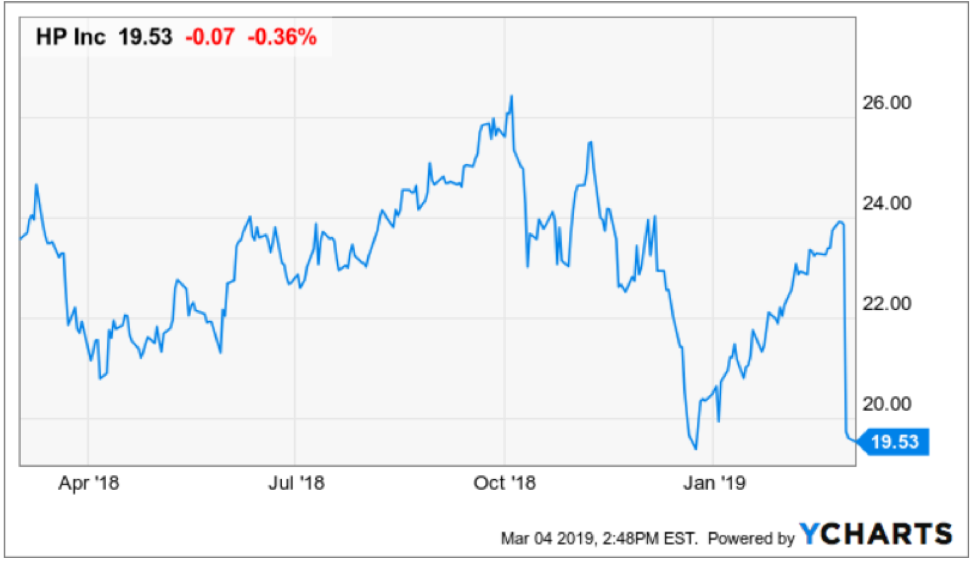 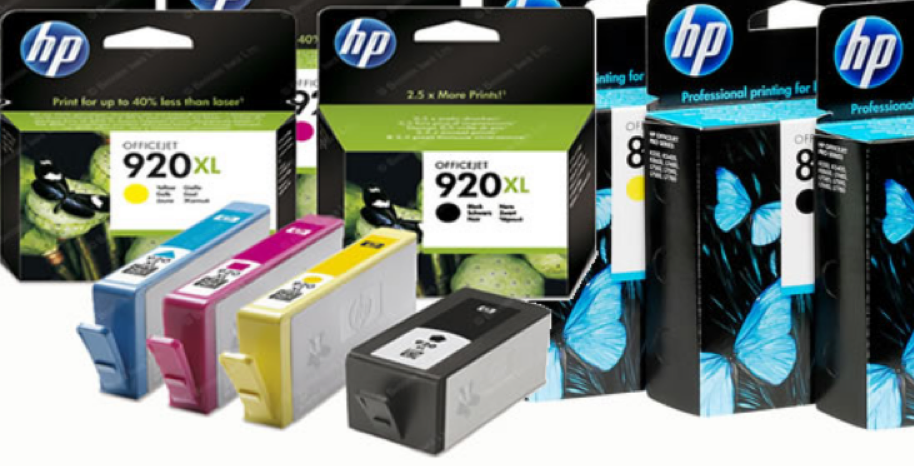 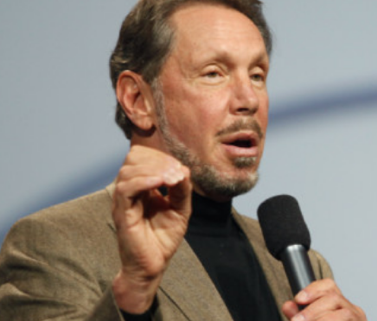 “When you innovate, you’ve got to be prepared for everyone telling you you’re nuts.” Said Founder and CEO of Oracle Larry Ellison 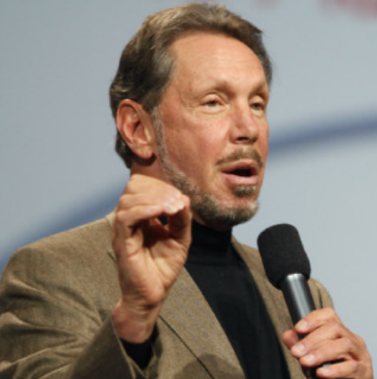