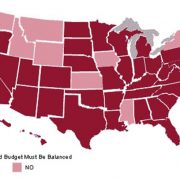 In the aftermath of the Great Recession, state GDP?s saw the sharpest drop since 1981. States shoveled money out of the economy nearly as fast as the Obama administration shoveled it in. During the bubble, the states wildly overestimated revenues, thought they were richer than they really were, and bulked up on social services as if the party would go on forever.

As a result, spending grew faster than the economy for many years, especially when it came to building new prisons. Because of the ephemeral nature of property and stock gains, that movie now has to run in reverse, and state services have to shrink down to what they can afford.

During the last two recessions, state and local governments hired, easing some of the pain at the local level. Not this time. Teachers, policemen, and firemen have been laid off with reckless abandon, the oldest and most expensive usually targeted to go first.

Entitlements, primarily state employee pension payments, are going to have to be the top priority, which in many cases now exceed those in the private sector. The headache is so huge that it is mathematically impossible for any tax increase to address the shortfall alone. No action at all brings slower economic growth and fewer jobs. This is all one reason why I am pounding the table for a long-term growth rate of 2%-2.5% which the financial markets have only recently started to embrace.

The Falling Market for Kids