After weeks of turning a blind eye, poo-pooing, and wishfully ignoring the global Coronavirus pandemic, traders are finally getting a wake-up call.

It turns out that the prospect of a substantial portion of the world’s population dying over the next few months cannot be offset by quantitative easing after all.

At least for the short term.

GM assembly lines in Michigan are slowing, both from missing parts and customers. And we have just learned that a section of Italy near Milan has been quarantined, thanks to a major outbreak there.

I learned the true severity of Corona a week ago when I ended up sitting next to a research doctor who worked for San Francisco-based Gilead Sciences (GILD) on a first-class flight from Melbourne, Australia to San Francisco.

He was returning from Wuhan, China, the epicenter of the virus. Since all flights from China to the US are now banned, he had to route his return home via Australia.

What he told me was alarming.

The Chinese are wildly understating the spread of the Coronavirus by perhaps 90% to minimize embarrassment to the government, which kept the outbreak secret for a full six months.

Bodies are piling up outside of hospitals faster than they can be buried. Police are going door to door arresting victims and placing them in gigantic quarantine centers. Every covered public space in the city is filled with beds and the roads are empty. Smaller cities and villages have set up barriers to bar outsiders.

He expected it would be many months before the pandemic peaked. It won’t end until the number of deaths hits the tens of thousands in China and at least the hundreds in the US.

The frightening close in the S&P 500 (SPY) on Friday and the horrific trading in futures overnight in Asia suggest that the worst is yet to come.

Since the beginning of 2019, we have been limited to mere 5% downturns in the major indexes, creating a parabola of euphoric share prices. This time, we may not get off so lightly.

There is no doubt that Corona will take a bite out of growth this year. The question is how much. Central banks could well dip in for yet another round of QE to save the day.

The bigger question for you and me is whether investors are willing to look through to the other side of the disease and use this dip as an opportunity to buy. If they are, we are looking another 5% draw down. If they aren’t, then we are looking for 10%, or even more.

Then there is the worst-case scenario. If Corona reaches the proportion of the 1918 Spanish flu pandemic where 5% of the world’s population died, then we are looking at a global depression and an 80% stock market crash.

Hopefully, modern science, antibiotics, and rapid response research teams will prevent that from happening. We already have the Corona DNA sequence and several vaccines are already in testing. In 1918, they didn’t even know what DNA was.

The disease could well be peaking now as the course of the last surprise epidemic, that of Ebola in 2014, suggests (see chart below). Until then, we shall just have to hope and pray.

In addition to praying, I’ll be raising cash and adding hedges just in case providence is out of range.

30-Year Treasury Bond Yields (TLT) hit all-time lows following on from the logic above, calling for a melt-up of all asset prices. Collapsing interest rates doesn’t signal an impending recession but a hyper-acceleration of technology wiping out jobs by the millions and capping any wage growth. I’m looking for 1.00% on the ten-year. Money will remain free as far as the eye can see.

Apple tossed Q2 guidance, giving up most Chinese sales because of the big Coronavirus shutdown. The stores have been closed. The stock dives overnight, down $10. Shutdown of its main production factory at Foxconn didn’t help either. Nintendo is also struggling with production of its wildly popular Switch game. When you lose the leader, watch out for the rest of the market.

Massive Chinese Stimulus should head off any sharp downturn in the economy. Will an interest rate cut and a huge dose of QE be enough to offset the deleterious effects of the Coronavirus? Ask me again in another month.

Expats fled Asia and are not returning until the epidemic is over. My plane on the way home was full of Americans taking families home to avoid the plague. It’s yet another drag on the global economy.

US Existing Home Sales faded in January, down 1.3%, to a seasonally adjusted rate of 5.46 million units. Inventories are down to an incredible 3.1 months, near an all-time low. I guess consumers don’t want to rush out and buy a new home if they are about to die of a foreign virus.

The Fed Minutes came out and it looked like the central bank wanted to keep American interest rates unchanged. The January meeting showed a stronger forecast for the economy, so no chance of another interest rate cut here. Even last month, Coronavirus was becoming an issue.

Leading Economic Indicators soared, up 0.8%, versus 0.4%. It’s the highest reading in 2 ½ years. If Coronavirus is going to hurt our economy, it’s not evident in the numbers yet.

The Philly Fed was also red hot, at 36.7. It’s another non-confirmation of the Corona threat.

Despite the fact that we may be facing the end of the world, the Mad Hedge Trader Alert Service managed to maintain new all-time highs. I used the steadily falling prices and sharply rising volatility Index of last week to scale into an aggressive long position from 100% cash.

I bought deep in-the-money call spreads in FANG stocks like (AAPL) and (MSFT) I also picked up additional positions in shares most affected by the Coronavirus, like Carnival Cruise Lines (CCL), United Airlines (UAL), and Wynn Resorts (WYNN), which are all down 25% from recent peaks.

All eyes will be focused on the Coronavirus still, with deaths over 2,000. The weekly economic data are virtually irrelevant now. However, some important housing numbers will be released.

On Monday, February 24 at 8:30 AM, the Dallas Fed Manufacturing Index is published.

On Tuesday, February 25 at 8:30 AM, the S&P Case Shiller National Home Price Index for December is out .

On Wednesday, February 26, at 8:00 AM, January New Home Sales are released.

On Thursday, February 27 at 8:30 AM, the government announced the second look at Q4 GDP. Weekly Jobless Claims are also out at 8:30.

On Friday, February 28 at 9:45 AM, the Chicago Purchasing Manager Index is printed.

As for me, we have just suffered the driest February on record here in California, so I’ll be reorganizing my spring travel plans. Out goes the skiing, in comes the beach trips. Such is life in a warming world. 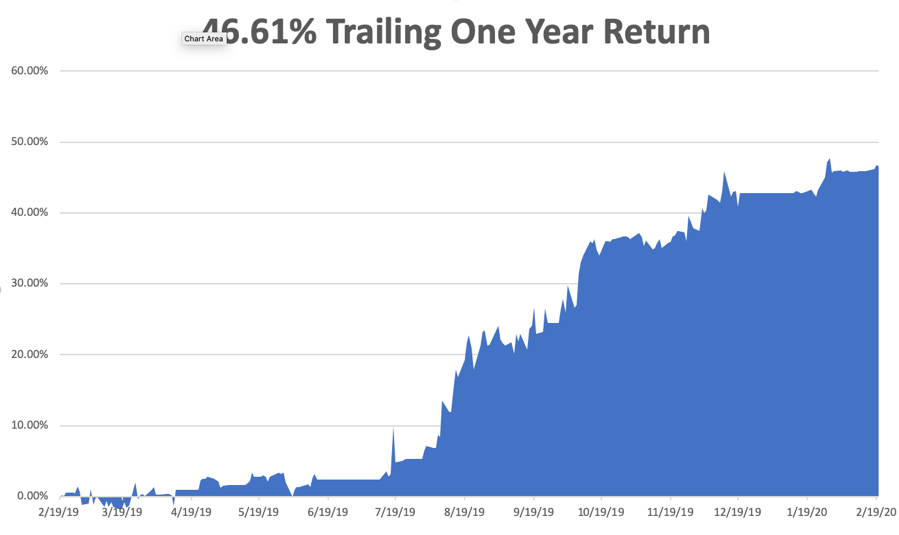 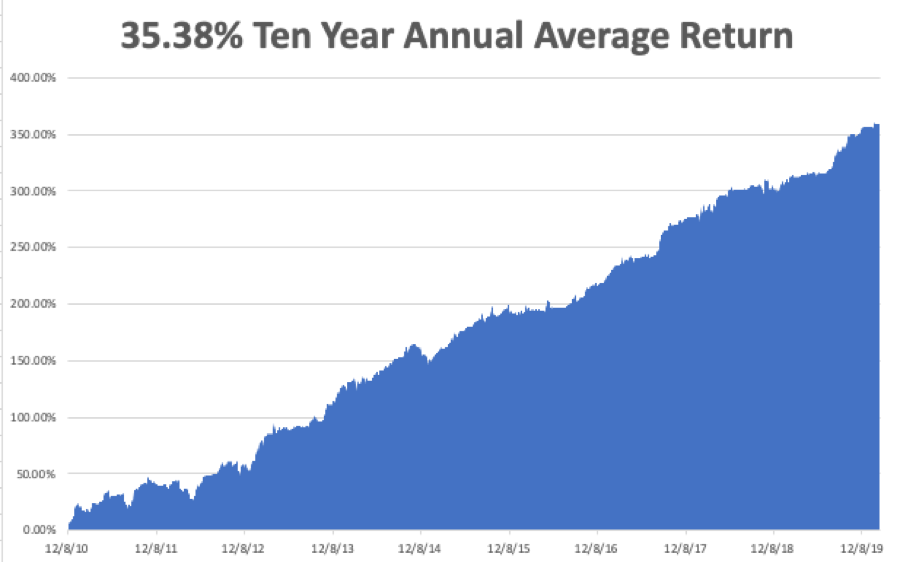 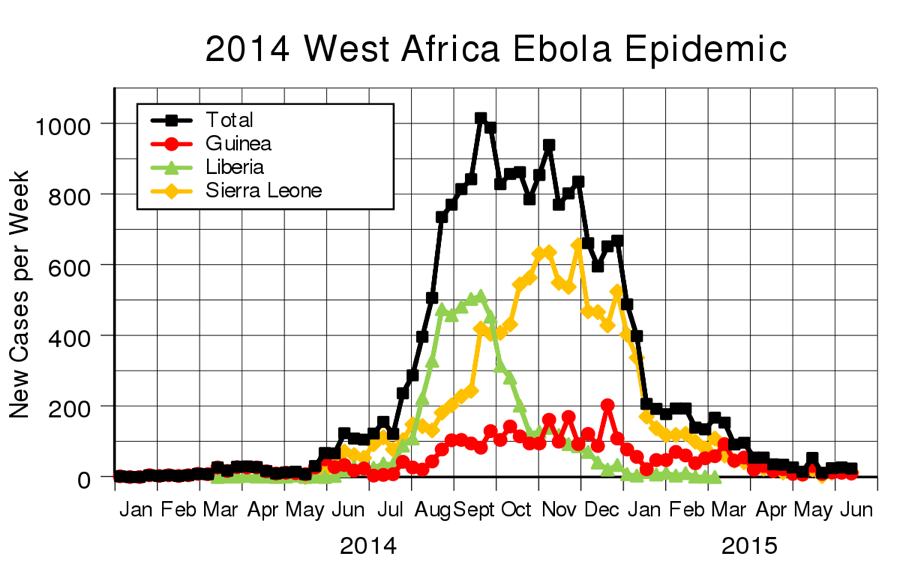 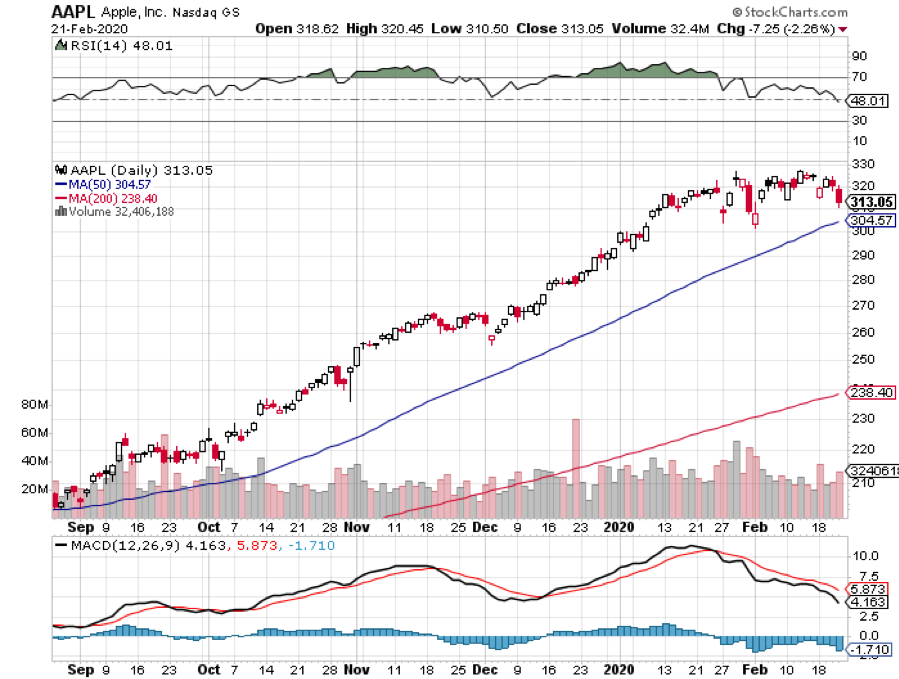 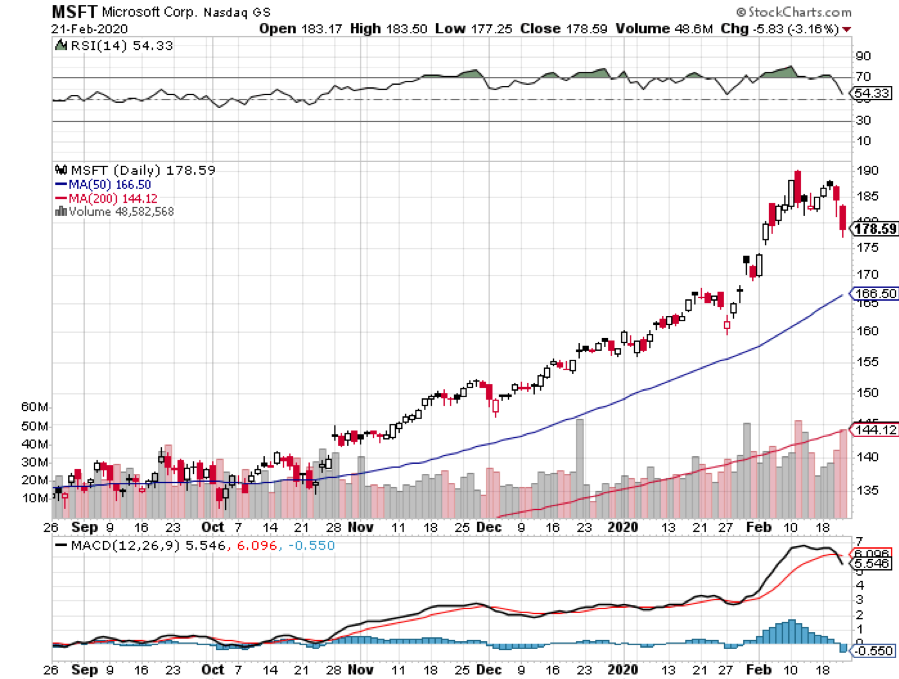 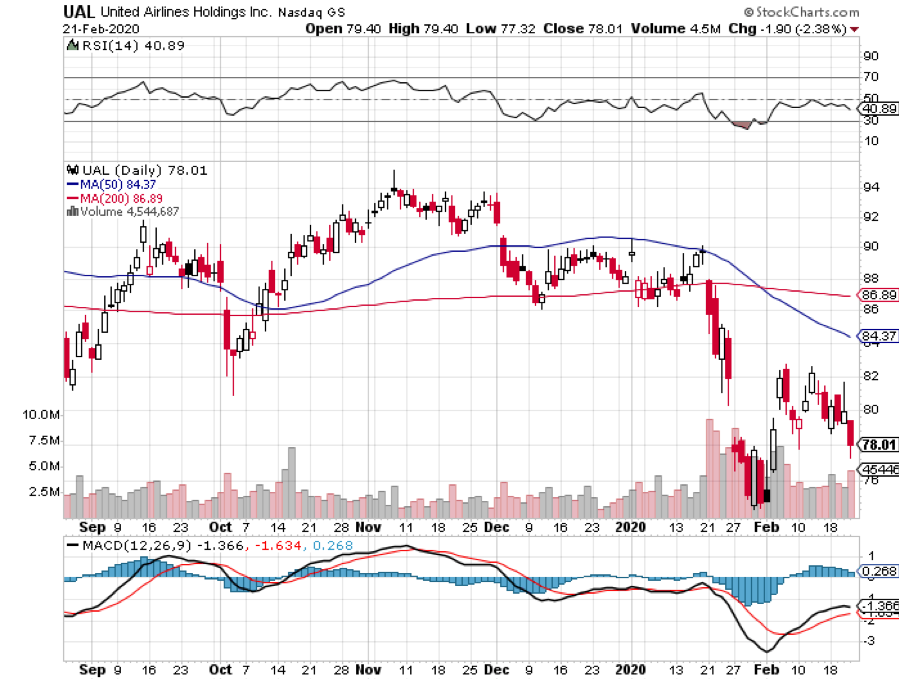 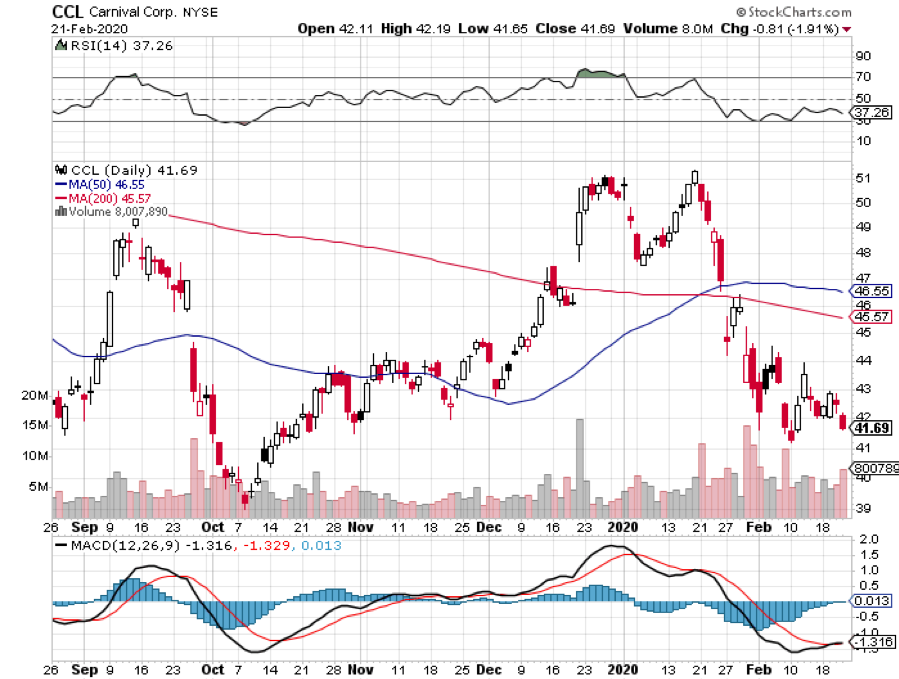 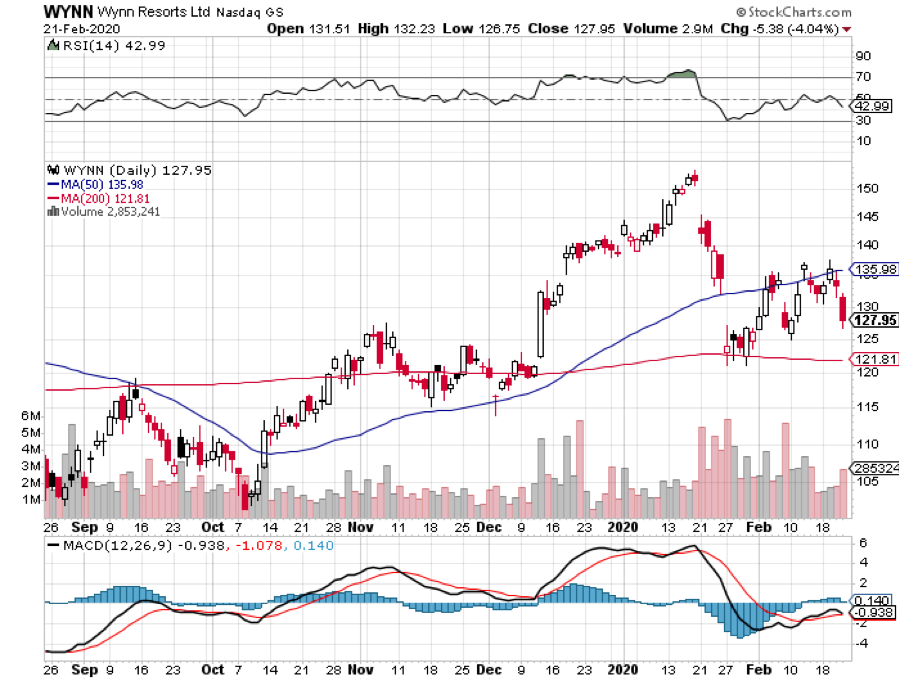 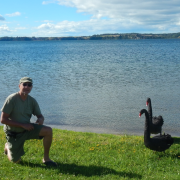 Ten Long Term LEAPS to Buy at the Bottom