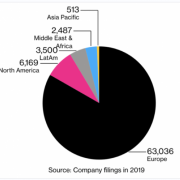 Automation is taking place at warp speed displacing employees from all walks of life.

According to a recent report, the U.S. financial industry will depose of 200,000 workers in the next decade because of automating efficiencies.

Yes, humans are going the way of the dodo bird and banking will effectively become algorithms working for a handful of executives and engineers.

The x-factor in this equation is the direct capital of $150 billion annually that banks spend on technological development in-house which is higher than any other industry.

We forget to realize that employee compensation eats up 50% of bank expenses.

The hyped-up “golden age of banking” should deliver extraordinary savings and premium services to the customer at no extra cost.

Mobile and online banking has delivered functionality that no generation of customers has ever seen.

The most gutted part of banking jobs will naturally occur in the call centers because they are the low-hanging fruit for the automated chatbots.

A few years ago, chatbots were suboptimal, even spewing out arbitrary profanity, but they have slowly crawled up in performance metrics to the point where some customers are unaware they are communicating with an artificial engineered algorithm.

The wholesale integration of automating the back-office staff isn’t the end of it, the front office will experience a 30% drop in numbers sullying the predated ideology that front office staff are irreplaceable heavy hitters.

Front-office staff have already felt the brunt of downsizing with purges carried out in 2018 representing a fifth year of decline.

Front-office traders and brokers are being replaced by software engineers as banks follow the wider trend of every company transitioning into a tech company.

The infusion of artificial intelligence will lower mortgage processing costs by 20% and the accumulation of hordes of data will advance the marketing effort into a smart, hybrid cloud-based and hyper-targeted strategy.

Historically, a strong labor market and low unemployment boost wage growth, but national income allocated to workers has dipped from about 63% in 2000 to 56% in 2018.

Causes stem from the deceleration in union membership and outsourcing has snatched away negotiating power amongst workers and the implemented mass automation has poured fat on the fire.

I was recently in Budapest, Hungary on a business trip and on a main thoroughfare, a J.P. Morgan and Blackrock office stood a stone’s throw away from each other employing an army of local English-proficient Hungarians for 30% of the cost of American bankers.

In this race to zero, companies can easily rebuff requests for higher salaries and if they threaten to walk off the job, a robot can just pick up the slack.

Automation is getting that good now!

The most recent spike came in the 7 years after the dot com crash of 2001 until the sub-prime crisis of 2008 adding around half a million jobs on top of the 1.5 million that existed then.

The longest and most dramatic rise in human bankers was from 1935 to 1985, a 50-year boom that delivered over 1.2 million bankers to the U.S. workforce.

This type of human hiring will likely never be seen again in the U.S. financial industry.

Recomposing banks through automation is crucial to surviving as fintech companies are chomping at the bit and even tech companies like Amazon and Apple have started tinkering with new financial products.

And if you thought this phenomenon was limited to the U.S., think again. Europe is by far the biggest culprit by already laying off 63,036 employees in 2019, more than 10x higher the number of U.S. financial job losses.

In a sign of the times, the European outlook has turned demonstrably negative with Deutsche Bank announcing layoffs of 18,000 employees through 2022 as it scales down its investment banking business.

Germany banks are also passing on the burden of negative interest rates to their clients.

A recent survey by Deutsche Bundesbank shows that 58% of banks are charging all savers negative interest rates while others only target wealthy and corporate clients.

If the U.S. dips into negative rates in the future, expect the same nasty effect on job force cuts that Europe has experienced.

Either way, don’t tell your kid to get into banking because they will most likely be feeding on scraps in the future. 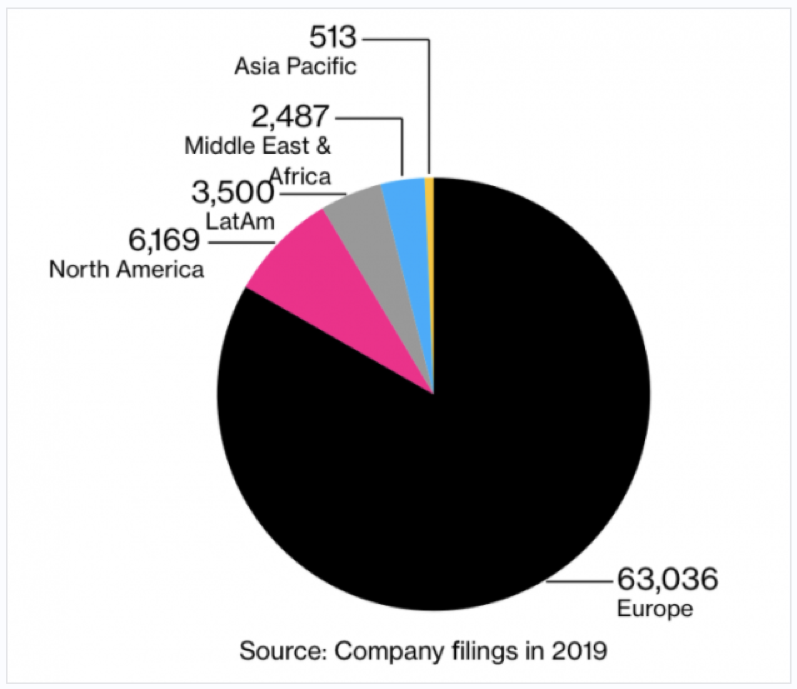