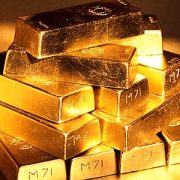 I am constantly barraged with emails from gold bugs who passionately argue that their beloved metal is trading at a tiny fraction of its true value, and that the barbaric relic is really worth $5,000, $10,000, or even $50,000 an ounce (GLD). They claim the move in the yellow metal we are seeing is only the beginning of a 30 fold rise in prices similar to what we saw from 1972 to 1979, when it leapt from $32 to $950.

So when the chart below popped up in my in-box showing the gold backing of the US monetary base, I felt obligated to pass it on to you to illustrate one of the intellectual arguments these people are using. To match the 1936 monetary value peak, when the monetary base was collapsing, and the double top in 1979 when gold futures first tickled $950, this precious metal has to increase in value by eight times, or to $9,600 an ounce.

I am long term bullish on gold, other precious metals, and virtually all commodities for that matter. But I am not that bullish. It makes my own three year $2,300 prediction positively wimp-like by comparison. The seven year spike up in prices we saw in the seventies, which found me in a very long line in Johannesburg to unload my own krugerands in 1979, was triggered by a number of one off events that will never be repeated.

Some 40 years of demand was unleashed when Richard Nixon took the US off the gold standard and decriminalized private ownership in 1972. Inflation then peaked around 20%. Newly enriched sellers of oil had a strong historical affinity with gold. South Africa, the world?s largest gold producer, was then a boycotted international pariah and teetering on the edge of disaster. We are nowhere near the same geopolitical neighborhood today, and hence my more subdued forecast. But then again, I could be wrong.

You may have noticed that I have not been doing much trading in gold or the other precious metals lately. That is because they are still working off an extremely overbought condition. Given some time, and a nice little dip in prices, and I?ll be back there in a heartbeat. You?ll be the first to know when that happens.