They are really rocking the market today, with the Dow up nearly 200 points off the back of a non-disastrous Chinese GDP growth figure of 7.7%. However, there is a serious disconnect going on in our markets which suggests to me that our own party may be about to end.

Yesterday?s blockbuster weekly jobless claim took applications for unemployment benefits down to a four-year low of 350,000. But if you ignore this, you have an unending series of data reports that shows an economy clearly decelerating to a growth rate of 1% per annum or less. That is one-seventh China?s rate.

And yet, you have an S&P 500 with a top end range that is a mere 3% within the high for the year. You don?t need a PhD in math from MIT to understand that rising stock prices and falling growth are an anomaly that can?t last and can only end in tears.

I think this is happening for a couple of reasons. Many traders are awaiting Q2, 2012 earnings reports and are willing to give companies the benefit of the doubt until they are out. Stocks are at the historic low end of valuation ranges. Many institutions are still underweight, and willing to use dips to pick up some bargains. This is why this summer has been a short seller?s nightmare, volatility has fallen through the floor, and many hedge funds have bailed for the duration.

I also think that many institutions are waiting for the Federal Reserve to announce QE III at their end of July meeting, thus powering the market to new yearly highs. I?m betting that they will be sorely disappointed. Ben Bernanke has so few bullets left to protect the economy that he will wait until the Indians are circling the wagons and unleashing a barrage of arrows, before he takes action. Quantitative easing is meant to be a safety net, not a stepladder from which to boost ever-higher asset prices. The Fed?s failure to deliver could give us the trigger we need to break to new lows in August.

Take a look at the charts below to see how clearly defined the recent channels and ranges are. Next time the SPX approaches 1,370, I might think about going short, taking out some downside insurance, selling out of the money calls, and generally getting yourself into a risk off posture. If you don?t, your summer could turn into a giant rainstorm.

This Party is Nearly Over 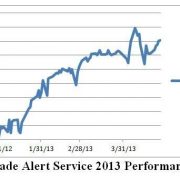 Piling on the Shorts Again

Thoughts at Sea Aboard the Queen Mary 2, Part I

Watch Out for Those Statistics
Scroll to top