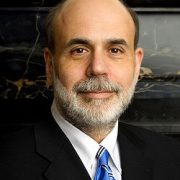 Since nothing less than the fate of the free world depends on the judgment of Ben Bernanke these days, I thought I?d touch base with David Wessel, the Wall Street Journal economics editor, who has just published In Fed We Trust: Ben Bernanke?s War on the Great Panic.

Bernanke was the smartest kid in rural Dillon, South Carolina, who, through a series of improbable accidents, and intervention by a local black civil rights leader, ended up at Harvard. He built his career on studying the Great Depression, then the closest thing to paleontology economics had to offer, a field focused so distantly on the past, that it was irrelevant. Bernanke took over the Fed when Greenspan was considered a rock star, inhaling his libertarian, free-market, Ayn Rand inspired philosophy in great giant gulps.

Within a year, the economy suddenly transported itself back to the Jurassic Age, and the landscape was overrun with T-Rex?s and Brontesauri. He tried to stop the panic 150 different ways, 125 of which were terrible ideas, the remaining 25 saving us from the Great Depression II. This is why unemployment is now only 9.1%, instead of 25%.

The Fed governor is naturally a very shy and withdrawn person, and would have been quite happy limiting his political career to the Princeton, NJ school board. To rebuild confidence, he took his campaign to the masses, attending town hall meetings and pressing the flesh like a campaigning first term congressman.

The price tag for Ben?s success has been large, with the Fed balance sheet exploding from $800 million to $2.7 trillion, solely on his signature. The true cost of the financial crisis won?t be known for a decade or more. The biggest risk is that we grow complacent, having pulled back from the brink, and letting desperately needed reforms of the financial system and the rebuilding of Fannie Mae and Freddie Mac slide. This is already starting to happen.

How Bernanke unwinds this bubble will define his legacy. Too soon, and we go back into a real depression. Too late, and hyperinflation hits. That?s when we find out who Ben Bernanke really is.