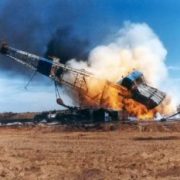 I always thought that a great strategy for a new hedge fund would be to only buy positions from existing hedge funds that were blowing up. That fund would buy securities subject to margin calls and distressed liquidations, which are by definition at six standard deviation extremes. It would not trade very often, but few it executed on would be humdingers.

If I were running such a fund today, I would be getting reading to short natural gas.
There has been a lot of talk about using CH4 to bridge our way to a carbon free economy because it produces half the CO2 that coal does. But virtually nothing has been done to put the infrastructure in place needed to consume the newly found 100 year supply in the US. To burn significantly more of this simple molecule, you need vastly more pipelines, power plant conversions, and above all, storage, than we have now. So far there has been a lot of talk (thanks, Boone), but little action.

Until then, the big production companies, like Chesapeake Energy (CHK) and Devon Energy (DVN) are going to race to out produce each other, praying they can use volume to offset price cuts, creating a huge weight on prices.

When natural gas was trading at $6 at the beginning of the year, I warned readers to stay away. Gas then launched into an agonizing, three month plunge, where it lost one third of its value. The ETF (UNG) did even worse, spiraling down 38%, as the widening contango decimated investors.

Since October, battered CH4 has rallied 28% off its $3.50 low. Talking heads on TV have explained this is because of the the record breaking cold weather we are seeing this winter, the imminent passage of a gas subsidies in congress, or because of crude supply shortages caused by the deep water drilling ban.

Don?t believe a single word of this. The supply overhang and storage shortage for this diminutive molecule is still as bad as it ever was. If we can claw our way back to the last high of $5, I think natural gas would be a screaming short again. The way to play this will be to short the United States Natural Gas Fund (UNG), which because of the straightjacket that limits its investment to near month futures contracts, is one of the worst performing funds in ETF land with the greatest tracking error to the underlying.

Natural Gas Prices Are Headed For Another Fall

The True Cost of Oil

Take a Look at Occidental Petroleum (OXY)
Scroll to top