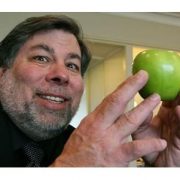 I first spoke to Steve Wozniak via HAM radio when I was 12 and he was the 14-year-old president of the Homestead High School Radio Club in Cupertino, California.

With seven children, my dad was pretty stingy with allowance money. But when it came to electronic parts, I had an unlimited budget, as that is where he saw the future.

So while other kids collected baseball cards, I stocked up on tubes, resistors, capacitors, and rheostats. This was back when you could buy WWII surplus parts from Radio Shack for pennies a pound.

Then the transistor came out, and building projects, like simple computers programmed with basic ‘1’s’ and ‘0’s’ suddenly became possible.

By junior high school, I had gained my radio license, learning Morse code at the required five words per minute, and a path opened that eventually led me to Woz.

Whenever I had a design problem, Woz always had a solution. He seemed to know everything about electronics.

I planned to attend De Anza College in the San Francisco Bay Area to collaborate with Woz, but then the State of California dropped a big fat scholarship to the University of Southern California in my lap, and we parted ways.

That?s government for you. The state thought I was smarter than Woz. Ha!

The last thing he taught me was this really cool way to make long distance phone calls for free with something called a ‘blue box.’

I later heard that Woz went to work for some kind of fruit company designing computers, which sounded stupid to me at the time, but Woz was always a guy who marched to a different drummer.

A decade later, I was an ambitious young vice president at Morgan Stanley, and ran into Woz again while escorting Steve Jobs around to big institutional investors hawking an Apple (AAPL) secondary share offering.

By then he had gained a lot of weight. He fascinated me with stories about how he had gone from scrounging around for a bootleg $12 chip, to making $100 million on the Apple IPO in just three years.

The phrase ?only in America? has to come to mind.

We bought our planes at the same time, me a Cessna 340 twin, and he a Beechcraft Bonanza. When I heard he totaled his in a crash in Santa Cruz a few years later, I sent flowers to his hospital room, even though he was in a coma and wasn’t expected to live.

In later years we moved into the same philanthropic circles at the San Francisco Ballet, the Computer Museum, and local art museums. To me, Woz always stood out at the social events as the only one who was not an inveterate social climber.

That was vintage Woz. He just didn’t care.

When I finally stumbled across his autobiography, iWoz, I grabbed it and devoured the pages in a couple of days.

The tome filled in the holes about what I knew about the man: the wives, the rock concerts, his universal remote control idea, and the early days at Apple.

You also learn a lot about electronics and basic computer hardware and software design.

Despite the billions, Steve is still an all right guy. To buy the book of his engaging and entertaining story from Amazon, please click here.

Are Stocks Now the New Bonds?
Scroll to top