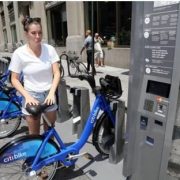 After ignoring the financial sector for most of the year, I am more than happy to jump into it here. The sector has been a serious laggard for the past three months, trailing the front-runners I picked in technology, industrials, health care, and consumer cyclicals. After chasing these favorites, traders are now looking for new fresh meat to devour.

No one would touch financials with a bargepole while interest rates were falling. This is because banks are most profitable when short-term interest rates, where they borrow, are low, while longer-term rates that they lend at, are rising. Falling interest rates make financials a no go area. They have done so with a vengeance after the September Federal Reserve decision not to taper its quantitative easing program.

Two weeks ago interest rates bottomed and began a rapid upswing, which I believe could last many months. We could even see ten-year Treasury bonds rebound from the recent 2.47% low back up to 3.0% by year-end, and 4.0% by the end of 2014.

That?s why I called the top of the bond market two weeks ago and showered you with a machine gun succession of Trade Alerts to go short Treasuries, all of which became immediately profitable. Those who followed my advice soon found money raining down upon them.

By buying bank shares here you are playing the second derivative of the short bond trade. Banks are about to go from being less profitable to more profitable during a falling bond price, rising interest rate environment. I have published three books on this topic, so believe me, I know. Every trader on the street understands this, hence the sudden renaissance of the financials.

I picked Citibank (C) because I know the former CEO, Vikram Pandit, well having worked with him for a decade at Morgan Stanley (MS). That relationship gave me unequaled access to the inner workings of this financial institution.

Citibank is not the target of multiple government civil and criminal prosecutions, as JP Morgan (JPM) has become, thanks to the London whale incident. They also do not suffer from the legacy problems bedeviling Bank of America (BAC), which they stepped into with their multiple acquisitions during the financial crisis.

There is another method to my ?Madness? here. Take a look at the six-month chart for (C) shares. It shows absolute rock solid support at the $47.40 floor. That makes the Citicorp December $45-$47 bull call spread a complete no-brainer.

If you don?t like Citibank you can caste a wider net and buy the Financial Select Sector SPDR ETF (XLF). You can click here to find the precise index makeup and the fund details. Berkshire Hathaway is the largest holding, with an 8.18% weighting, while Citibank is the fifth largest holding with a 6% weighting.

But Will It Take Me to a Great Trading Year?