The Bank of Japan renewed its membership in the international quantitative easing club last week, announcing that it was substantially expanding its bond repurchases.

Specifically, it will increase them from ?55 trillion to ?65 trillion, a jump equivalent to $830 billion. To understand how big this is, consider that Japan?s GDP is one third the size of the US. That would be the same as the Federal Reserve announcing a repo program with $2.5 trillion here. Imagine what your asset prices would do if that happened.

For good measure, the Japanese also announced an inflation target of 1%, which is entirely wishful thinking for a country that is entering its 23rd year of deflation. It?s like a man on skid row planning on how to spend his prospective lottery winnings.

The government was prompted to action by the 2011 full year GDP figure, which came in at an appalling -0.9%, compared to a robust growth of 4.5% in 2010. The tsunami reconstruction program has fallen woefully behind schedule due to extreme mismanagement and incompetence by the authorities, despite being more than adequately funded. But after watching the Land of the Rising Sun for the last 20 years, I have come to expect incompetence. Slowdowns in Europe and China, plus the Thai floods and the Fukushima nuclear meltdown have provided additional headwinds.

The immediate impact was to trigger a sharp selloff in the yen, delivering an immediate windfall to readers of my Trade Alert Service who were already long yen puts. Traders like myself are always looking for confirming cross market correlations.? You can find one in the movement of the Nikkei stock average, which has been the world?s most despised asset class for the last two decades.

As you can see from the chart below, it is threatening an important multi month breakout to the upside. The reasons for this are simple. A cheaper yen makes Japanese exports more competitive. It also makes the foreign earnings of Japanese multinationals more valuable when translated back into yen. Look no further than the chart of Toyota Motors (TM), which have leapt by a blistering 30% this year.

If you are still unsure about the integrity of the yen collapse, check out the chart for the long dollar basket (UUP). It is setting up for a multiyear head and shoulders breakout to the upside. Uncle Buck has recently taken a steroid shot from the continuing weakness in Europe and the new recession in Japan.

Bottom line: keep selling the yen on rallies, possibly for the next several years. 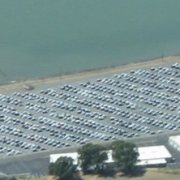 Have We Seen “Peak Auto Sales”?

An Evening With General Douglas Fraser