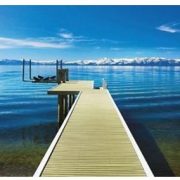 I am sitting here in front of a crackling hot fire at my lakeshore estate in Nevada?s Incline Village. It is a brilliantly clear day, with mallard ducks skimming the surface of Lake Tahoe, and the Canadian geese flying in formation overhead. Snow covered Mount Tallac, some 30 miles to the South, looks so close I feel I can almost grab it and take out a bite.

I am on my way to Washington DC for the inauguration, and had the jet touch down in nearby Truckee for a day of reading and rest. My staff greeted me like I was some kind of conquering hero. One of the perks of working for me is that they get a free subscription to my newsletter, and they all invest their 401k?s, IRA,?s pensions, and profit sharing plans accordingly. When they?re doing well, I feel it. My performance shows in those little chocolate truffles that get placed on my pillow at night.

In fact, it has been the hottest start to a year for me in a long time. The model- trading portfolio is up 8% so far in 2013, which is more than half of what I made during all of last year. With the way my positions are currently structured, I stand to make an additional 50 basis points a day until the next options expiration on February 15. All the market has to do until then is to trade up, sideways, or down small,and I get to keep it all. Right now, that is looking like a pretty good bet.

I completely nailed everything. On day one, I went aggressively long the S&P 500 (SPY) and the Russell 2000 (IWM). I averaged up with more equity positions, a financial, American Insurance Group (AIG), and copper producer Freeport McMoRan (FCX) as a China play. Sensing that it was pedal to the metal for a falling yen (FXY), (YCS), I put a major chink of the portfolio into a short position there. In effect, I am long US equities in Japanese yen.

On top of that, I have a massively short volatility position embedded in all of this, not a bad thing to have when the Volatility Index (VIX) is plumbing new six year lows at the 12% handle. Since then, the data has been released showing that the biggest cash flows into equity mutual in a decade came hot on the heels of my Trade Alerts. Things only went awry with Apple (AAPL), which continued to weaken beyond all belief, as if to prove that I was only human.

It looks like my numbers are going to get a further boost this week from no less a fan than the Republican Party. Former vice presidential candidate, Paul Ryan, from Wisconsin, has indicated that the coming debt ceiling crisis, due on March 31, will be postponed for three months.

Having covered Washington politics for 40 years, I can tell you that he is speaking in code. For ?postponed?, read ?cancelled?. I think they figured out it was a lame idea anyway. Certainly, the markets came to the conclusion two months ago that all of these media constructed ?crises? were a bunch of baloney. That is why I have been pounding the table with readers to pile on the long positions, and ?go commando? on their short positions. Risk markets can only go ballistic in response to this ?aha? moment.

All of this encourages me to stick with the strategy outlined in my 2013 Annual Asset Class Review (click here). Look for a hot first quarter, to be followed by two scary ones, and then a strong finish. This means that all good things will be coming to an end in the not too distant future. In fact, we have probably already started some sort of topping process in the markets that will take a couple of months to unfold. Then look out below.

I just got a call from the airport that the flight plan has been filed, clearance obtained, and the jet is fueled up. Got to go.