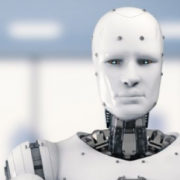 He was diagnosed with motor neuron disease, more commonly known as Lou Gehrig’s disease in 1963 at the age of 21 and sadly passed away March 14, 2018 at the age of 76.

Famed for his work on black holes, Professor Hawking represented the human quest to maintain its superiority against quickly advancing artificial acculturation.

His passing was a huge loss for mankind as his voice was a deterrent to A.I.’s relentless march to supremacy. He was one of the few who had the authority to opine on these issues.

Gone is a voice of reason.

Critics have argued that living with A.I. poses a red alert threat to privacy, security, and society as a whole. Unfortunately, those most credible and knowledgeable about A.I. are tech firms.

They have shown that policing themselves on this front is remarkably unproductive.

Mark Zuckerberg, CEO of Facebook (FB), has labeled naysayers as “irresponsible” and dismissed the threat. After failing to prevent Russian interference in the last election, he is exhibiting the same defensive posture translating into a de facto admission of guilt. His track record of shirking accountability is becoming a trend leading him to allow politicians to post untrue marketing material for the 2020 U.S. election.

Share prices will materially nosedive if A.I. is stonewalled and development stunted. Many CEOs who stake careers on doubling or tripling down on A.I. cannot see it die out. There is too much money to lose – even for Mark.

The world will see major improvements in the quality of life in the next 10 years. But there is another side to the coin which Zuckerberg and company refuse to delve into…the dark side of technology.

Tesla’s (TSLA) CEO Elon Musk has shared his anxiety about robots flipping the script on humans. Elon acknowledges that A.I. and autonomous vehicles are important factors in the battle for new technology. The winner is yet to be determined as China has bet the ranch with unlimited resources from the help of Chairman Xi and state sponsored institutions.

The quagmire with China has been squarely centered around the great race for technological supremacy.

A.I. is the ultimate X factor in this race and whoever can harness and develop the fastest will win.

Musk has hinted that robots and humans could merge into one species in the future. Is this the next point of competition among tech companies? The future is murky at best.

Hawking’s premise that evolution has inbuilt greed can be found in the underpinnings of America’s economic miracle.

Wall Street has bred a culture that is entirely self-serving regardless of the bigger system in which it finds itself.

Most of us are participating in this perpetual money game chase because our system treats it as a natural part of life. A.I. will help a select few do well in this paper chase to the detriment of the majority.

Quarterly earnings performance is paramount for CEOs. Return value back to shareholders or face the sack in the morning. It’s impossible to convince anyone that America’s capitalist model is deteriorating in the greatest bull market of all time.

The world is quickly changing as science fiction becomes reality.

People on Wall Street are a product of the system in place and earn a tremendous amount of money because they proficiently execute a specialized job. Traders are busy focusing on how to move ahead of the next guy.

Firms building autonomous cars are free to operate as is. Hyper-accelerating technology spurs on the development of A.I., machine learning, and enhanced algorithms. Record profits will topple and investors will funnel investments back into an even narrower grouping of technology stocks after the weak hands are flushed out.

Professor Hawking said we need to explore our technological capabilities to the fullest in order to avoid extinction. In 2018, exploring these new capabilities still equals monetizing through the medium of products and services.

This is all bullish for equities as the leading companies associated with A.I. to reap the benefits.

And let me remind you that technology is still the least regulated industry on the planet even with all the recent hoopla.

It is having its cake and is eating it too. Hence, technology is starting to cross over into other industries demonstrating the powerful footprint tech has extracted in economics and the stock market.

The only solution is keeping companies accountable by a function of law or creating a third-party task force to regulate A.I.

In 2019, the thought of overseeing robots sounds crazy.

The future will be here sooner than you think.

About That Tesla Recommendation

Please Use My Free Database Search