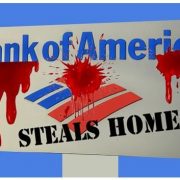 I?ll give you the quick and dirty argument behind buying Bank of America. For the past four years, the main argument for avoiding this stock like the plague was the hidden book of bad home loans it was hiding on its back bookshelf, thought to be in the tens of billions of dollars. This is why the shares spent most of the last half decade trading at a pitiful 50% of its book value. Nobody believed what management was representing as its true value.

Throw a sustainable recovery in the real estate market into the mix, and that excuse goes out the window. Rising property values means better quality collateral for the bank and more credible asset value representations. This will encourage equity investors to pay up to book value, 60% higher than price to book of 63%, and possibly more. That gets you at least to $20/share right there.

Do any search on (BAC), and a vast outpouring of contentions litigation, regulatory transgressions, and fines will pour out. Wherever there has been trouble in the financial system for the past decade, Bank of America was there, and up to its neck. The key point is that these are all in the past, settled, and accounted for in the future earnings stream.

Some of the acquisitions that (BAC) made during the crash were horrendous in their timing. It never missed an opportunity to overpay. The $2 billion Countrywide Financial acquisition stands out for its stupidity, which ate up masses of management time. Merrill Lynch at $50 billion? You must be joking. At that price, I have a pretty orange bridge here in San Francisco I?d like to sell them, as well. This was when a charitable valuation for the old raging bull would have been zero. Add 130% to the Dow average and it is a different story. The booming stock market has enabled Merrill?s profits to surge, and (BAC) could probably flip it here for a tidy profit.

After winding down positions in financials for five years, many long-term institutional investors are now running generational lows in this unloved sector. Return to market weightings could take years. Sure, we have already covered some serious ground with (BAC), from $5 to $12.75. I think the stock could make it up to $20 this year, and $30 eventually. Trend reversals like this go on for years. Looks like Warren Buffet got the bottom at $5, again!

Finally, (BAC), along with the entire banking industry, is perfectly positioned to profit from rising interest rates. Steep yield curves are where banks traditionally make their bread and butter, through borrowing short and lending long. The collapse of the Treasury bond market (TLT) may not be imminent, but it is coming. Think of (BAC) as an undated put on Treasury market.

This particular option spread, the $11-$12 in April is attractive because the upper strike matches the old upside breakout level on the charts. This should provide ample support during the inevitable correction. The April expiration is only 22 trading days away.

When Sterilization is Not a Form of Birth Control