This trade was an unmitigated disaster, and hopefully it will be the worst of the year. I?m glad we had one of these because it provides a wonderful opportunity to illustrate everything that can go on with a trade. Every loss is a learning opportunity, and a loss not learned from is an opportunity wasted, and dooms one to repetition. Let me count the ways:

1) I was too aggressive on the strike. I should have matched my long August $70 strike with a short May $70 strike instead of reaching for the extra income by selling the $72.50?s. I got away with this on the (PHM) trade. Not so on (BA).

2) I shouldn?t have leveraged up with a 1:2 ratio. Those who did straight 1:1 spreads did much better and slept well at night. They saw only a slight opportunity cost as some losses were offset by profits in the August $70 puts as intended.

3) I was not aware that individual investors were so harshly treated by margin clerks. Hedge funds only get charged margin on the delta plus some small maintenance, which they then continuously rehedge. Most retail investors were prevented from doing this trade by broker policies banning naked put selling.

4) The Morgan Stanley guy who decided to price the Facebook (FB) issue on an options expiration day has to have a hole in his head. That only succeeded in increasing market volatility. I?m sure that when they made the call, they thought this would make (FB) go up faster. Instead, the reverse happened. On Friday, everyone?s portfolio effectively turned into a long Facebook position, tracking (FB) tick for tick. This did not end well.

5) This was a really unlucky trade. Although the global macro situation is pretty much unfolding as I expected, I didn?t think the rot would spread so fast once it set in. Even a one-day short covering rally on Friday would have turned this trade profitable. Thank Greece for that. Facebook too. It took one of the longest continuous market moves down, 12 out of 13 days, for this trade to lose money.

6) The only consolation is that those who had puts exercised against them and saw stock delivered into their accounts Monday morning at a cost of $72.50 were granted a huge short covering rally to sell into, with (BA) rising $2.85 back up to $72. This enabled shareholders to recover 85% of their losses on the position.

Taking in the entire May short option expiration play, and it is clear that this didn?t work. Add up all the P&L?s and this is what the damage came to:

Of course, this loss was more than offset by the enormous profits that we took in on our long put positions in the recent market meltdown. Since I initiated the short put strategy on May 3, the long put positions added a welcome 30% to the value of the portfolio.

We did get the protection against a sideways market that had been killing my performance in April. So it did perform its insurance function as intended. As I often remind readers, when you buy fire insurance, you don?t complain to the company when your house doesn?t burn down.

The way this strategy usually works is that you make money like clockwork all year, then one bad month wipes out two thirds of your total profits. That means repeating this play will probably work for the rest of 2012.

This also illustrates how the neophytes who attempt this strategy with tenfold leverage regularly get wiped out. What looks like easy money on the outside quickly becomes toxic waste on your position sheet. The rich uncle morphs into a serial killer overnight. When I look at those miracle 100% a year track record regularly touted on the Internet, this is usually what I find. 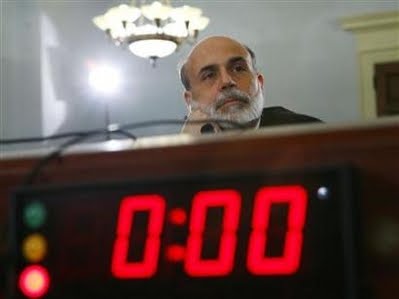 That was the judgment of the markets in the wake of the Federal Reserve?s latest economic forecast released today for at least two minutes. The asset classes most dependent on further monetary easing, like gold (GLD), silver (SLV), the Euro (FXE), and the yen (FXY), saw dramatic, sudden selloffs, and then recovered losses almost as fast. Blinked and you missed all the action. The big head turner was in gold, which should have been down $50 yesterday with Bernanke cutting the fundamental argument for owning the yellow metal off at the knees.

The belief in the Bernanke put is now so overwhelming that it overrides all other considerations. It flies in the face of a torrent of economic data that has turned overwhelmingly negative for the past month. Just yesterday, March durables showed a shocking 4.2% decline, in part driven by a 48% fall in domestic aircraft deliveries. So what does the market do? It takes Boeing (BA) up 5%.

This morning, weekly jobless claims posted their third week over 385,000, a hugely negative leading indicator for the economy. So the Dow rallies 100 points. The data show that the winter real estate bounce clearly ground to a halt in March, but Pulte Homes (PHM), the weakest of the homebuilders, runs 22% into indifferent earnings.

April has been a frustrating month for me of correctly predicting what is going to happen and then the relevant stock or asset class doing the exact opposite to what they should. Excess liquidity trumps everything. I think what is happing is that stocks are popping, regardless of the actual earnings for the mere fact that the report is out of the way, not because of any great improvement in business. I read the Boeing earnings report three times to see what the big deal was. All I found was a 2% increase in annual forecast earnings per share thanks to a reduction in reserves for litigation costs. That hardly justifies the price action.

There is one thing in common with most of these earnings reports. Companies reduce their guidance so far that they become impossible not to beat. Then the report comes out as a big upside surprise, which enthrall the shills in the media. What gets lost in the jumble is that the YOY gains in earnings are minimal at best and are often created by special accounting provisions. They are a shadow of the real YOY improvements we saw last year.

The end result of this shell came is a market with falling earnings, rising multiples, and trading volumes that are down a lot from just a year ago. Warning: this does not last forever. When the market disintegrates into hedge funds, high frequency traders, and day traders buying and selling to each other, nobody makes any money over time.

I believe in the Bernanke put. Ben Bernanke is playing the market like a fiddle, quite successfully so. But it only kicks in with the S&P 500 at 1,100, or down some 20% from here. That?s where he exercised it last September, when markets were in meltdown mode and posing a real threat to the economy.

That means investors at these levels are willing to risk 20% in the indexes, or 40% in individual names, before the Fed rides to the rescue. Only institutions with the longest possible time frames, like long only index funds and pension funds can afford to take such a view.

Risk markets are a constant tug of war between fact and belief, and right now belief is winning. But that is all part of show business. I am so incensed that I am going to complain to Treasury Secretary Tim Geithner in person. I have a private meeting with him in downtown San Francisco in two hours. I?ll let you know what he says on Monday. Oops, gotta go.